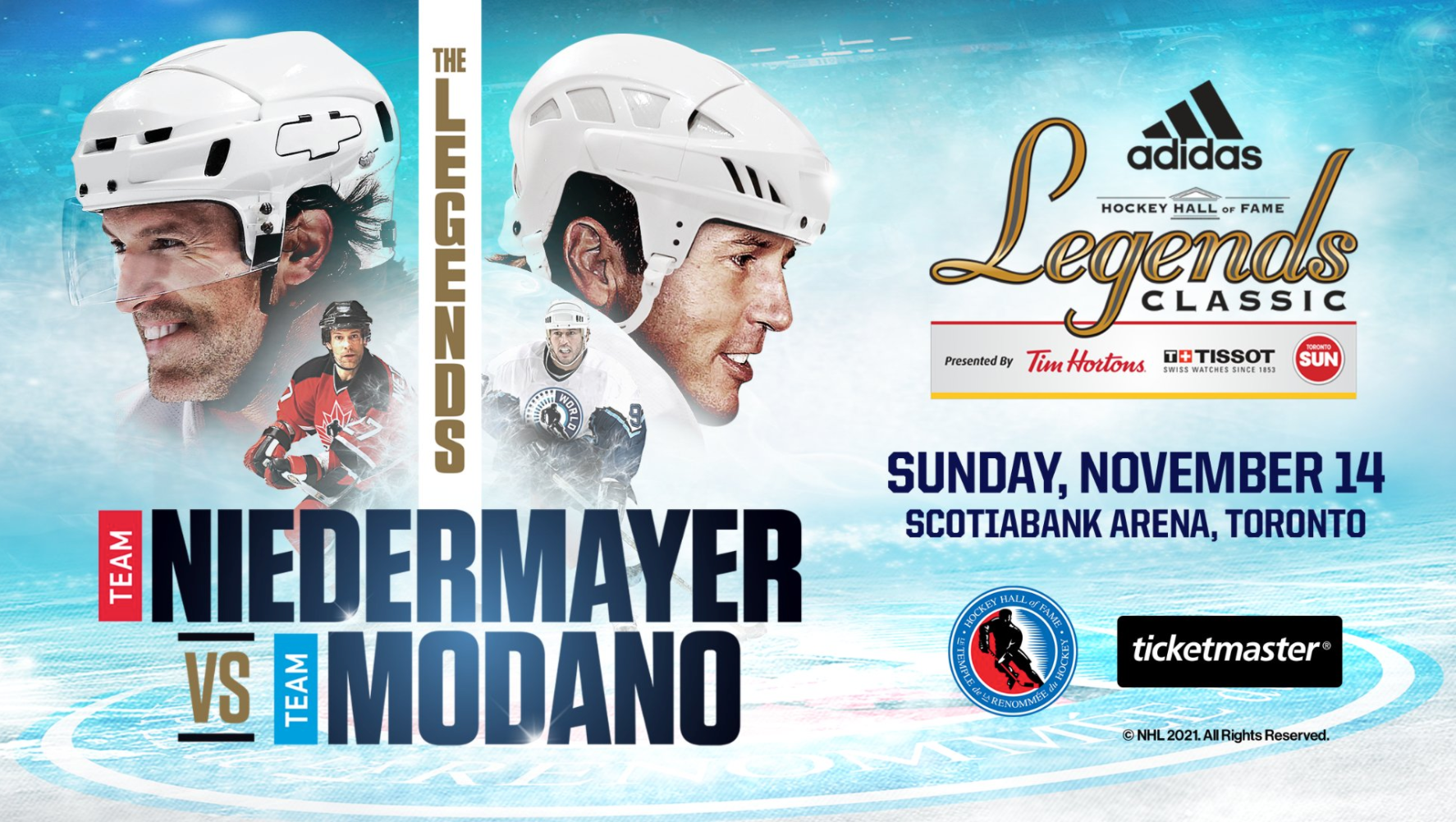 Photo credit: The Hockey Hall of Fame
By Nick Barden
1 year ago
Comments
Toronto Maple Leafs hockey is returning to Scotiabank Arena, and with that comes other hockey events, too!

Get your tickets today for the @adidasCA Hockey Hall of Fame Legends Classic on Sunday, November 14th. SAVE with the ME+3 4-Pack Offer 🎟️ https://t.co/ZfOBAfPMhX pic.twitter.com/gvq9XoIx6p

The Hockey Hall of Fame Legends Classic is back in Toronto on Sunday, November 14th.
It’s part of Induction Weekend, which is when a few of hockey’s legends are inducted into the Hockey Hall of Fame. The class of 2020 will feature Doug Wilson, Kim St-Pierre, Kevin Lowe, Jarome Iginla, Marian Hossa, and Ken Holland.
Throughout the weekend, there will be a number of events. The first, on Friday, November 12th, is the Hockey Hall of Fame game where the Leafs take on the Calgary Flames. This game is a part of the NHL’s 2021-22 season.
Advertisement
Ad
Advertisement
Ad
Then, on Saturday, November 13th, will be the inductee Q&A, where you’ll be able to ask questions to the Class of 2020.
After those events is the Hockey Hall of Fame Legends Classic on Sunday, which begins at 3pm. Each team is captained by one past inductee. Scott Niedermayer will captain Canada Legends and Mike Modano will captain World Legends.
The good news is, you’ll be able to watch this game live and in-person.

This team features every 2020 Hall of Fame inductee, but one.
St-Pierre and Erica Howe will be in net for the Canadian Legends. Joining her on the team will be Iginla, Jayna Hefford, Eric Lindros, Martin St. Louis, Wendel Clark, Mike Commodore, Shane Doan, Simon Gagne, Dion Phaneuf, Chris Phillips, Robyn Regehr, Brent Seabrook, and Patrick Sharp.
The team will be coached by both Holland and Wilson, who are both 2020 inductees.
Advertisement
Ad
Advertisement
Ad

Lowe, a 2020 inductee, will coach the World Legends team.
The team, captained by Modano will feature other players like Nik Antropov, Al Iafrate, Tomas Kaberle, Darius Kasparaitis, John LeClair, Dmitri Mironov, Jason Pominville, Alexei Ponikarovsky, Brian Rolston, Sergei Samsonov, Graeme Townshend, and Anthony Kulakowski, who will be a Legends Line Guest Player.
Molly Schaus, who’s a female goaltender from the US Olympic team will be in net.
Other coaches include Lanny McDonald and Todd Pokrywa, a Legends Line Guest Coach.

On Monday, November 15th will be the Induction Ceremony. At 7:30pm, the broadcast will begin from Meridian Hall and will be live on TV.
If you have anymore questions regarding Induction Weekend, please click here for more information!