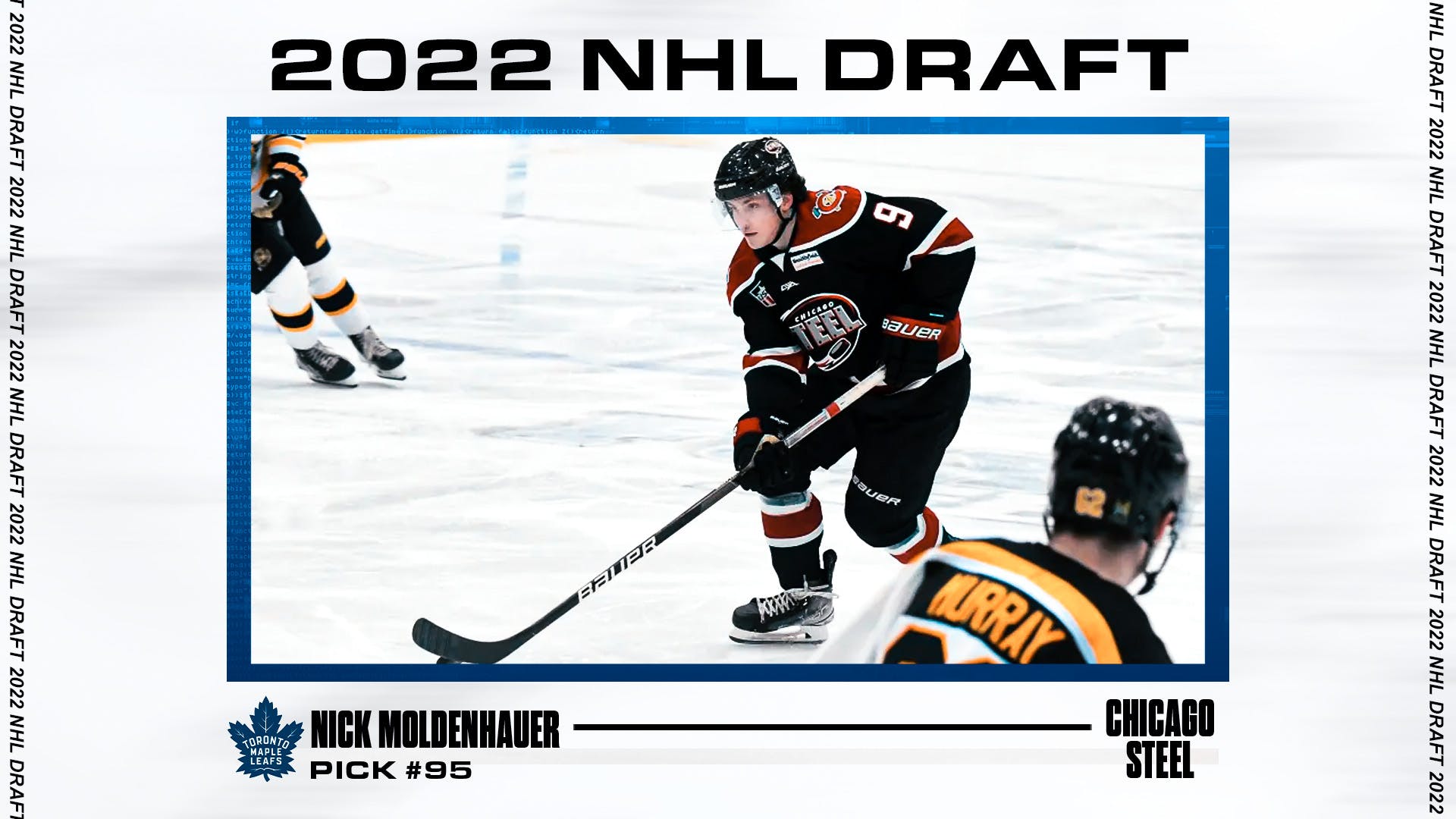 Photo credit: Nick Barden
By Nick Richard
4 months ago
Comments
After trading down from the 79th pick and acquiring the 95th and 135th overall picks, the Leafs selected forward Nicholas Moldenhauer from the Chicago Steel of the USHL. There is an obvious connection between the organization and the player as newly appointed assistant general manager Ryan Hardy is the former GM of the Chicago Steel.

With the No. 95 pick in the Draft, the #Leafs select Nicholas Moldenhauer from the Chicago Steel. Obviously the Leafs have tight connections with that team.

Moldenhauer missed time to begin the season but was a star for the Chicago Steel upon his return, finishing the campaign with 18 goals and 25 assists in just 41 games. He measures in at 5’11” and 170 pounds.

#Leafs Nick Moldenhauer has big breakout potential IMO. He lost 15 lbs from an illness that caused him to miss training camp, suffered a skate laceration on his jaw on his first shift of the year that required emergency surgery, and he still scored over a PPG in the USHL pic.twitter.com/sstqwJE1fJ

Advertisement
Ad
Advertisement
Ad
A speedy, hardworking forward who can pull off skilled moves in stride, Moldenhauer possesses a diverse offensive skill set. He sees the ice well and distributes the puck with pace, has the puck skills to beat defenders one-on-one and play through traffic, and has a good sense of anticipation to arrive in scoring positions at the right time to utilize his quality shot. He can sometimes try to do too much but when he utilizes his teammates and plays a give-and-go game, he can be a real offensive driver. There is still a rawness to his overall game but if he can put it all together, Moldenhauer could grow into an effective middle-six NHL forward.

Filthy goal from #2022NHLDraft eligible forward Nicholas Moldenhauer. He missed time to begin the season but has looked good since returning to Chicago’s lineup. pic.twitter.com/FYJdDS5cc1

Advertisement
Ad
Advertisement
Ad
Stay tuned for more on all the Leafs’ moves from the 2022 NHL Draft.
(Statistics from EliteProspects.com)
More From TheLeafsNation.com: