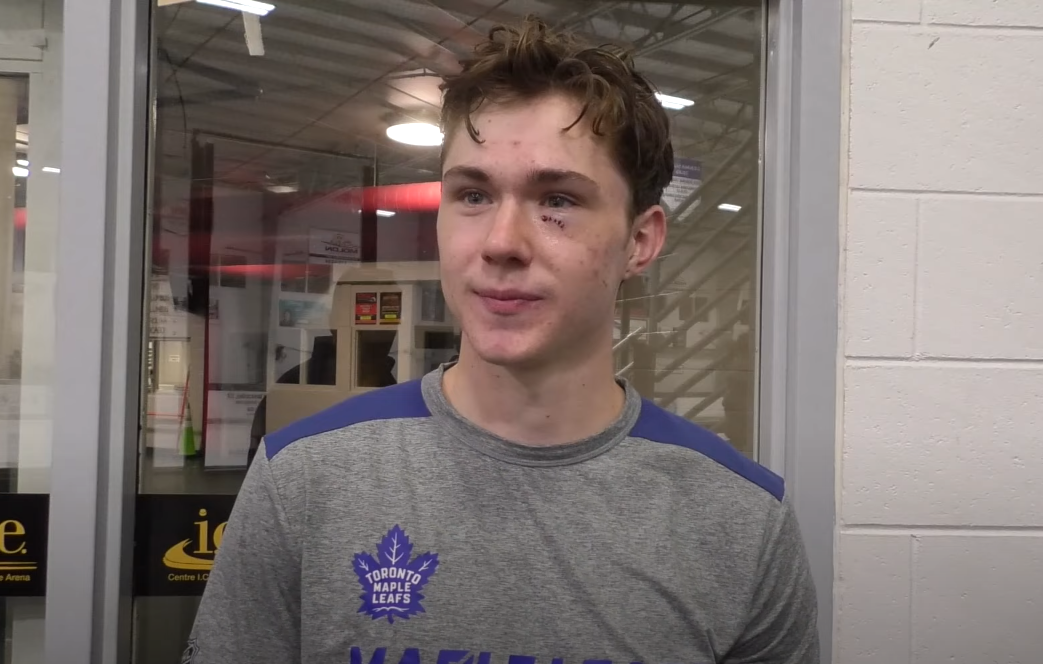 Photo credit: Toronto Maple Leafs / YouTube
By Nick Barden
4 months ago
Comments
The Maple Leafs didn’t come out with the win in game two of the Traverse City Prospect Tournament, but there were some things to be excited about.
Let’s begin with the goaltending in this one from Toronto’s side. Luke Cavallin, who’s under an AHL contract for this season, started game two for the Maple Leafs’ prospects. However, he didn’t finish it.
The 21-year-old netminder was pulled before the third period began after giving up six goals on 22 shots. Marco Constantini, who’s signed to an ATO, began the third period for Toronto and he allowed two goals on five shots in the 8-3 loss to St. Louis.
Aside from the goaltending, there were a few things — like individual performances and nice goals — that stood out. But before we get to that, I’d like to discuss Toronto’s power play in this game.
The Maple Leafs went scoreless on all eight opportunities against St. Louis on Friday night. While some of that came down to the great penalty kill that the Blues had in this game, Toronto should’ve had at least one power play goal.
Advertisement
Ad
Advertisement
Ad
They have the fire power — with Nick Robertson, Alex Steeves, and Nick Abruzzese, who are all future NHLers — highlighting the first unit. The second power play also had fire power with Max Ellis, Pontus Holmberg, Pavel Gogolev, Fraser Minten, and William Villeneuve.
It’s quite surprising that with the amount of good players Toronto has, they couldn’t at least put one in the back of the net while on the man advantage. The Maple Leafs’ prospects have now gone scoreless in all nine of their power play opportunities during the Traverse City Prospect Tournament.
Everything isn’t bad, though, as we did see some new goal scorers for Toronto on Friday.

Max Ellis gets a nice feed from Alex Steeves and he scores his first goal for the #Leafs in Traverse City.

Toronto down 2-1 to St. Louis in the second period. pic.twitter.com/PXZ9ncdh3Y

This goal is all about the Notre Dame connection. Alex Steeves steps around one defender at the blue line, then another closer into the Blues’ zone, and then makes a nifty feed to Ellis. Once the 22-year-old receives the puck, he spins, makes a nice move with his hands, and puts the puck past Will Cranley for his first of the Prospect Tournament.
You can see how effortlessly Ellis can turn on a dime, with the puck and under pressure. His skating — in both tight spaces and open ice — allow him to be the shifty player he is when in the offensive zone.
It’s a very nice goal from two former Notre Dame teammates, and now possibly Marlies teammates in the next few weeks.

Nick Abruzzese scores his first goal of the Prospect Tournament, and he does it while falling to his knees. Nice eyes from Pontus Holmberg to spot Abruzzese.#Leafs/Blues tied 2-2. pic.twitter.com/jmEPqTFSMH

As two players are closing in on Pontus Holmberg, the 23-year-old is able to spot Abruzzese and get him the puck. When Abruzzese receives it, he instantly has three players on him, but still somehow manages to put the puck upstairs while losing his balance.
The 23-year-old, who spent last season at Harvard, continues to show that he’s going to be a very important player for the Marlies this season. Everything about him — from his strength, skating, and shot — make him an exciting addition to the AHL club this fall.

It was a quiet Maple Leafs development camp for Voit, but he managed to make a statement in his first game of the Prospect Tournament in Traverse City.
With Fraser Minten out for almost half of the game (discussed below), Voit got the opportunity to move up to Toronto’s third line alongside Curtis Douglas and Pavel Gogolev.
Advertisement
Ad
Advertisement
Ad

It worked out late in the second period as Voit received a wraparound pass from Douglas and made no mistake putting the puck in the back of the net. There was some nice patience from the 19-year-old as he waited out the defender before taking his shot.
Voit remained on the third line for the remainder of the game and was able to showcase his skating and tenaciousness on the puck.

The honourable mentions from Game 2

We begin the list with Fraser Minten, who managed to get into a fight in the first period against St. Louis.

After an unfortunate play where Jake Neighbours loses his balance and goes hard into the boards, his teammate, Brady Lyle, takes exception and starts a shoving match before dropping the gloves with Minten. The 19-year-old Leafs prospect would head straight to the dressing room after as there was only 2:27 remaining in the first period.
Advertisement
Ad
Advertisement
Ad
However, he didn’t return to the game until the third period.
“We were down 2-0 and I was a little mad,” Minten said to the media with a smile while dawning some stitches under his left eye. “A little bit of a scuffle and nothing bad. No hard feelings, just a hockey play.”
It was yet another game where Pavel Gogolev impressed many. Although he didn’t have a goal, the 22-year-old still got on the score sheet with an assist on Ty Voit’s in the second period.

Pavel Gogolev showcasing his puck protection in what could be another great game for the 22-year-old. pic.twitter.com/k9nqNuDifW

Gogolev continued to showcase a lot of his play in the second game of the Prospect Tournament. He looked very engaged and seemed as though he wanted to be a massive part of this team for the rest of the tournament.
The 22-year-old does like to score goals, though, so it might be worth watching for one in the final two games.
Advertisement
Ad
Advertisement
Ad
But as we inch closer to the end of this tournament, I wonder if head coach Manny Malhotra sticks with the status quo, swapping players in and out of the lineup, or if he decides to keep players in who’ve had good showings.
I guess we’ll see when they play next, which is on Sunday at 2PM ET against the Columbus Blue Jackets.
More from TheLeafsNation.com: