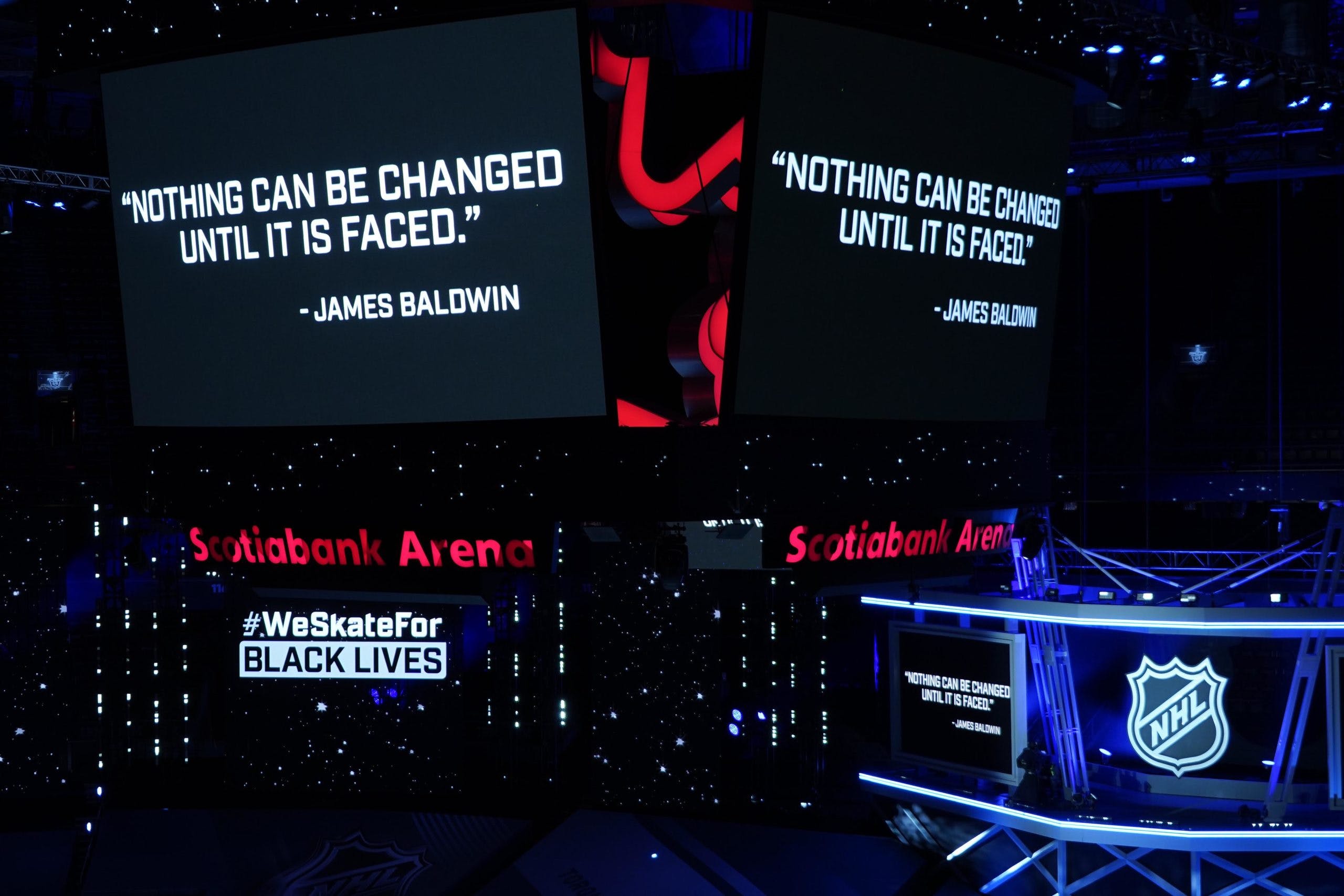 Photo credit: © John E. Sokolowski-USA TODAY Sports
By Roxanne Khasow
1 year ago
Comments
Look at the NHL. Look at the athletes. Look at the training staff. Look at the front offices. What do you see? What changes around diversity and inclusion have happened in the past year that have actually made a difference and have been more than performative or for show?
Do you remember where you were on August 27th, 2020? Do you remember the statement the athletes and teams made that day? Less than a year ago, the NHL postponed playoff games after the Hockey Diversity Alliance (HDA) requested that the league do so following the unjust shooting of Jacob Blake and the ongoing efforts of the Black Lives Matter movement in the United States and Canada.
The NHL released this statement to support the players and their decision:

The part that gets me the most is, “The NHLPA and NHL are committed to working to foster more inclusive and welcoming environments within our arenas, offices, and beyond.” It sounds hopeful, it sounds promising, it sounds like the NHL actually understands the issue of racism and wants to make a difference.
Advertisement
Ad
Advertisement
Ad
Just after the postponed games, the NHL announced that they working on initiatives to combat racism and accelerate inclusion efforts in and around the league. The NHL and NHLPA were set out to work with the Hockey Diversity Alliance to establish and administer a grassroots hockey development program to provide mentorship and skill development for BIPOC youth in the GTA. They said that all League employees would participate in an inclusion learning experience, focused on anti-racism, unconscious bias, dimensions of identity, micro-aggressions, and cultural competency. The NHL said that they would continue to host a series of “Courageous Conversations” related to race, equity, and inclusion, among many other programs and initiatives.
And yet, here we are, almost a year later. And in my opinion, the NHL has nothing to show for any work or effort made. The NHL says that Hockey Is For Everyone, and has yet to do anything to prove that. They say that they want to foster a positive and inclusive environment for BIPOC players, fans, and employees alike, and the League allowed Tony DeAngelo, a racist, slur-using defenseman to sign with the Carolina Hurricanes.
Advertisement
Ad
Advertisement
Ad

And keep in mind that the Canes joined the Black Girl Hockey Club’s (BGHC)  #GetUncomfortable pledge earlier this year. This campaign was created by the BGHC ‘to disrupt racism on and off the ice and make hockey welcoming for everyone.’ Signing DeAngelo devalues their pledge and shows that they don’t actually care about diversity, inclusion, or making hockey a safer space.

Tony DeAngelo signing with the Canes who have been all woke on social media is exactly why so many people are skeptical of performative gestures. Talk is so cheap.

The Toronto Marlies announced that Dusty Imoo would be joining the team as a Goaltending Coach. If you took a look at Imoo’s Twitter account, which was public, then deleted, and is now set as private, you would have found that Imoo liked anti-Black, transphobic, and white supremacist tweets, and if you’re new to Twitter, these likes are all public (that is if your account is public), and any and every one can see them.
Advertisement
Ad
Advertisement
Ad

along with COVID denying, climate change denying, and a deep support of Trump, Imoo has liked many tweets spewing hateful racist, homophobic, and transphobic comments, along with supporting the insurrection and insinuating he is on Parler. pic.twitter.com/y2sWFpPJTS

Is this the type of coach we see fit to develop youth and the future athletes of the NHL? It shouldn’t be. After a lot of uproar on social media, the Marlies swiftly announced that Imoo would not join the team, and that they made a mistake by not following organizational protocols.

Last October, the HDA parted ways with the NHL over their lack of action to make the game of hockey more inclusive. Their co-founders, Evander Kane and Akim Aliu didn’t believe that the NHL was committed to addressing the barriers that BIPOC face for long-term change, instead the ‘action’ that the NHL took were all performative and temporary solutions to an imbedded racial issue.

The Hockey Diversity Alliance is grateful for the support from the public we received. Unfortunately, the support we hoped to receive from the NHL.

In their official Press Release, the HDA wrote that, they ‘waited many months for a response to the common sense HDA pledge they proposed, and it is clear that the NHL is not prepared to make any measurable commitments to end systemic racism in hockey.’
Advertisement
Ad
Advertisement
Ad
I don’t know about you, but to me it sounds like the NHL decided they would announce a partnership with the HDA, and hoped that would be enough. Real change does not happen overnight, but it also does not happen without real time, effort, and work by everyone involved. If the National Hockey League doesn’t care enough to create change, who will?
Playing professional hockey is not a right, it’s a privilege. Right outside the Toronto Maple Leafs’ dressing room, and in the collar of their jersey it says, ‘Honour. Pride. Courage.’ To play in the NHL and put on a jersey for any team in the league means so much more than to simply play a game of hockey. As an athlete you represent the city, the crest on the front of the jersey, and the fans that stand behind you every single night, despite the score on the board. As an athlete you have the responsibility to use your platform positively, to encourage change, and grow the game.
Advertisement
Ad
Advertisement
Ad
When you apply for a job in any setting there is a hiring process. Your qualifications are examined, you’re interviewed by multiple managers to see if you are the right fit, and the organization might even look into your social media presence to ensure that you have positive values, ethics, and morals. Why aren’t athletes held to this same standard?
Instead, athletes often solely are drafted because of their play and athleticism. But, to play a sport is about more than who someone is on the ice, it also matters who they are off the ice as well. The NHL wants to grow their game, to grow their viewership, to grow their fandom. But how can you do that when you don’t include non-traditional fans of the sport?
Advertisement
Ad
Advertisement
Ad
There is an obvious lack of representation at all levels of hockey, and to reach these fans (and even future NHL players or execs), you have to show them that hockey wants them, that hockey wants to include them, and quite simply, that hockey loves them back. Over the past year, the NHL has done nothing to include BIPOC fans or players in their conversation aside from saying that Hockey Is For Everyone. This might be a shocker, but you need to walk the walk, and not just talk the talk. It is disappointing to see that so much hope was promised, and nothing was delivered.

Can we stop saying “Hockey Is For Everyone” now?

The NHL says that they care, but have yet to prove it.