Advertisement
Ad
TLN Three Stars: Is it playoff time yet? 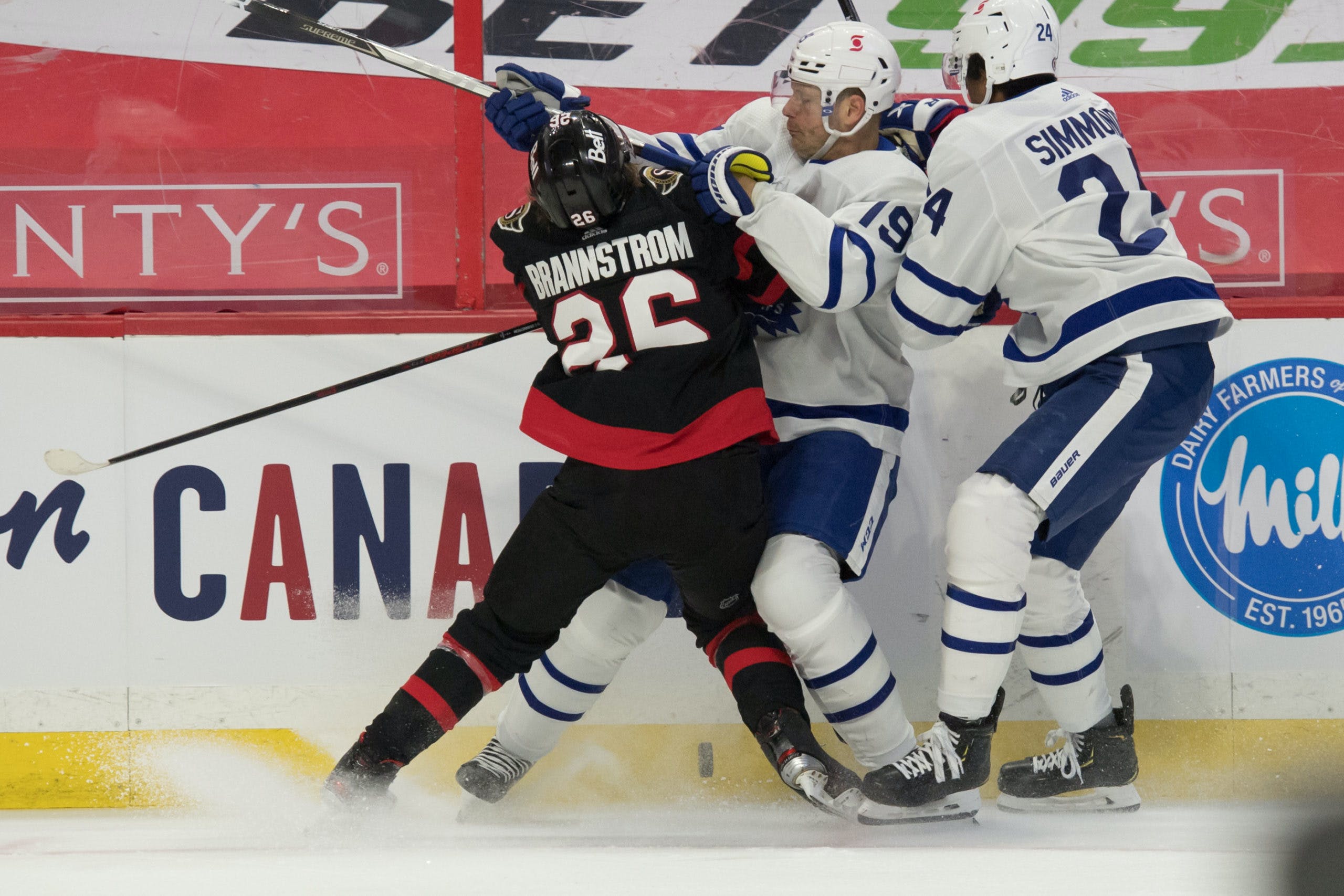 Photo credit: Marc DesRosiers-USA TODAY Sports
By Brendan Mori
1 year ago
Comments
The Toronto Maple Leafs lost 4-3 in Overtime to the Ottawa Senators on Wednesday night.
@Jake Muzzin, @John Tavares and @Auston Matthews scored for the Leafs. @Nikita Zaitsev, @Connor Brown, @Parker Kelly and @Josh Norris scored for the Senators, who were playing their final game of the 2021 season.
Frederik Andersen was making his first start with the Leafs since March 19th, after being shutdown due to a lingering lower-body injury.
In the first period, both teams looked like they were ready for the offseason. Late in the first period, Zaitsev floated a knuckle-puck past Andersen, who was heavily screened on this goal.

The second period saw a goal explosion. Muzzin ripped home a one-timer on the ice cold powerplay to make it 1-1.

Connor Brown would score his fifth shorthanded goal of the year not too long after, and Parker Kelly scored his first career NHL goal midway through the second period.
Advertisement
Ad
Advertisement
Ad

John Tavares capped off this period with his 20th goal of the season to cut the Senators lead to 3-2.

In the third period… a whole lot of nothing happened. Until @Auston Matthews did this.

Unfortunately, the Leafs run for the President’s Trophy ended tonight. @Josh Norris scored the overtime winner to give the Senators by a final score of 4-3.

At this point, there isn’t much else to say about the Leafs powerplay. It is brutal. The Muzzin goal was nice, but the team’s puck movement and ability to generate scoring chances with the man advantage is severely lacking. Definitely a concern as the team heads in to the playoffs.

Tonight wasn’t the prettiest night statistically for Andersen, but I thought he really battled tonight and got more comfortable as the game progressed. I wouldn’t read too much into Andersen starting this game either. If I was a betting man, I’d wager heavily on @Jack Campbell starting game 1 of the playoffs for the Leafs next week. Nonetheless, an encouraging sign for the Leafs is that Freddy is healthy enough to at least back-up Campbell come playoff time.
Advertisement
Ad
Advertisement
Ad

Matthews had a team high six shots on goal, including his 41st goal of the season. Matthews is set to win his first career Rocket Richard Trophy and also the first major trophy win for a Leafs player in decades.

Tavares hit the 20-goal mark for the 12th straight season, while @William Nylander set-up Tavares’ goal, extending his point streak to eight games on the season. I thought both players were generating chances in a game that the Leafs clearly were not too worried about. Definitely excited to see what they can do come playoff time next week.

Nylander and Tavares nearly combined for a highlight reel play there but a battling Foligno was in the way pic.twitter.com/5DfvL9yGxS

"Good pass" in John Tavares translates to "Holy f–k! What a feed!" pic.twitter.com/qy7BU7Mqk2

We’ve almost made it! The final game of the regular season is this Friday, as the Leafs head to Winnipeg to take on the Jets. Puck drop is 8:00 EST on TSN.
Advertisement
Ad
Advertisement
Ad