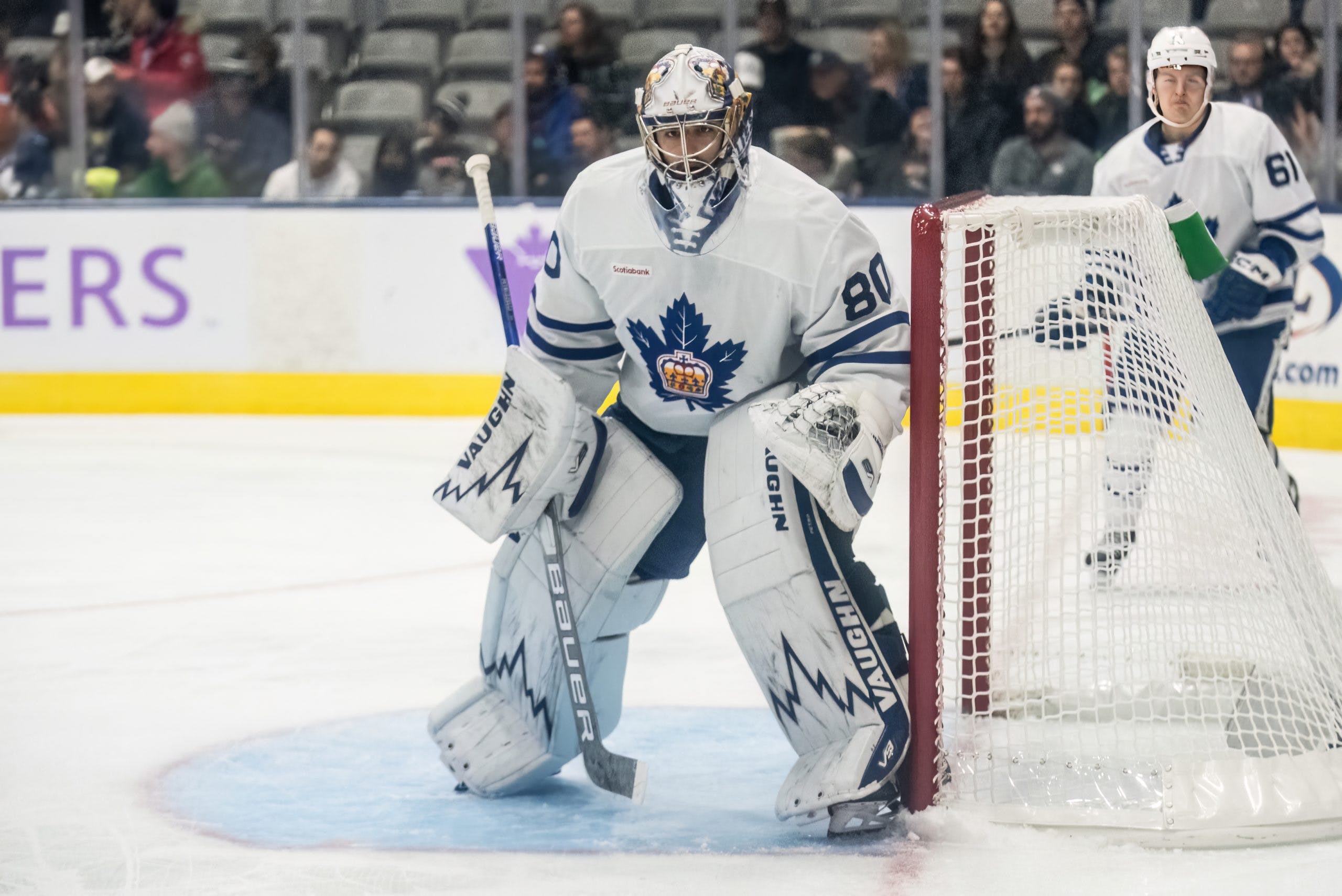 Photo credit: Photo by Steven Ellis/The Leafs Nation
By Nick Richard
22 days ago
Comments
With the calendar turning over to 2023 and a spectacular World Junior Championships signaling the unofficial halfway point in the hockey calendar, it’s an excellent time to reassess the Leafs’ prospect pipeline. There have been some standout performances by players throughout the system and underwhelming starts for others, leading to some noteworthy changes from TLN’s most recent prospect ranking in the offseason.
Today, we get you warmed up with a handful of honorable mentions who landed just outside the organization’s top 20 prospects.
While I have consulted TLN colleagues and others who are familiar with the Leafs’ prospect pool, these rankings are purely my own. Following the criteria from past TLN Prospect Rankings, only players who are under the age of 24 and have played fewer than 42 NHL games are considered “prospects.” As a result, players such as Mac Hollowell, Joseph Woll, and Joey Anderson weren’t considered. 2020 first-round pick Rodion Amirov has also been excluded, as the primary focus remains his health and well-being as he continues to undergo treatment for a brain tumor.

Ovchinnikov signed his entry level deal with the Leafs last season and got into a handful of games with the Marlies to close the season, scoring a pair of goals in seven contests. As part of the agreement that got him out of his original KHL contract, the Leafs loaned him back to Sibir this season, where he has suited up in a depth role for their KHL club.
Advertisement
Ad
Advertisement
Ad
His ice time has fluctuated over the course of the season, and his production of five goals and three assists through 49 games has been a bit underwhelming, but he is at least playing a regular role at Russia’s top level – something that was a point of contention for Ovchinnikov and the Leafs in the past.
Ovchinnikov has been a dominant offensive force at the junior level in Russia, and his skill set is a better theoretical fit in a more offensive role than he has played this season. He is a fantastic skater, has slick hands with good playmaking vision, and he can finish scoring opportunities from dangerous areas. Already with one foot out the door, it seems unlikely that Sibir will suddenly elevate Ovchinnikov in their lineup but continuing to play consistent minutes in the bottom-six could also have its benefits as he works to round out his game. He is set to rejoin the Marlies and participate in his first NHL training camp next fall, and while his upside is intriguing, there is a long way to go before he is considered for NHL duty.
Advertisement
Ad
Advertisement
Ad

When the Leafs drafted Miettinen in the sixth round of the 2020 draft, he was considered a potential steal after piling up 73 points in 52 games in the Finnish junior league. His freshman year with St. Cloud lent credence to that belief as he put up 11 goals and 13 assists in 31 games on his way to being named the NCHC Rooke of the Year while also earning selections to the conference’s All-Rookie Team as well as it’s Second All-Star Team.
Things haven’t continued on that same upward trajectory for Miettinen, however, and his production actually regressed in his sophomore season as he notched 10 goals and 13 assists in 37 games. Now in his junior year, the overall production has improved and he has hung around the point-per-game mark all season, but the goal output, particularly at even strength, has been disappointing.
Advertisement
Ad
Advertisement
Ad
Miettinen is a fairly well-rounded offensive threat but his shot is his greatest asset, and he just hasn’t found a way to weaponize it consistently as his collegiate career has progressed. Once considered a potential offensive driver at the NCAA level, he has settled in as a complementary player who does a lot of his damage on the powerplay, and the other parts of his game will require significant refinement if he isn’t going to be a dynamic offensive threat at the pro level.
The Leafs hold Miettinen’s exclusive rights until August of 2024, so he still has ample time to prove worthy of an entry level contract, but his NHL probability doesn’t feel as high as it once did.

#LeafsForever prospect Veeti Miettinen scored his first goal of the season on Sunday. After a bit of a down year in 2021-22, he’s got four points through his first two games to begin the season. pic.twitter.com/492qjMttLt

Petruzzelli has taken an interesting path to become a Leafs prospect. A third-round pick of the Detroit Red Wings back in 2017, he took over as Quinnipiac University’s starting goaltender in his junior campaign before racking up plenty of accolades in his senior year, including the ECAC Goaltender of the Year award.
Advertisement
Ad
Advertisement
Ad
Rather than signing with the Red Wings after his senior year in the NCAA, Petruzzelli opted to sign an AHL deal with the Toronto Marlies due in large part to their wealth of developmental resources. He spent most of his first professional season with the Newfoundland Growlers and earned a nod to the ECHL’s All-Rookie Team after posting a .927 SV% in 23 games. Petruzzelli began the 2022-23 season with the Marlies and though he was likely in line for an NHL contract at some point, the Leafs’ had their hand forced by injuries to Matt Murray, Ilya Samsonov, and Joseph Woll, resulting in Petruzzelli being signed in a bit of an emergency situation to serve as the backup to Erik Källgren.
He never ended up getting into an NHL game in his first stint with the Leafs, and his play has been up and down since being returned to the Marlies, who now have a crowded crease with Woll recently returning from the injured list. Petruzzelli does have the tools to be an NHL goaltender, standing at 6’6″ with good athleticism and play-reading ability, but he is still working to put it all together. Efficiency of movement in his crease and improved footwork are likely the greatest areas of focus for him as he continues to develop in the AHL.
Advertisement
Ad
Advertisement
Ad

Some Keith Petruzzelli highlights from this season. The 6-foot-6 netminder is 6-0-0 and has a .922 SV% with the Marlies. Coming off of a strong first professional season with the @NLGrowlers pic.twitter.com/09g3cj1WzB

Kressler went undrafted after the 2020-21 OHL season was canceled due to the pandemic but was invited to Toronto’s rookie camp, where his energy and pace of play helped him earn an entry level contract with the club.
Last season was a difficult one for Kressler as injuries limited him to just 28 games with Flint in the OHL, in which he tallied five goals and 11 assists. He has missed time again this season but has already tallied 18 goals and 16 assists in just 26 games, more than doubling last season’s production in two fewer games.
Despite his small stature, Kressler is a tenacious player who brings energy to each shift and frequently gets to the middle of the ice in the offensive zone. He has shown improved shooting ability this season, and he doesn’t shy away from the dirty areas around the net. His ceiling is likely that of a fourth-line energy player who can chip in with a bit of offense, but his tenacity and work ethic will serve him well in that pursuit. Look for Kressler to join the Marlies and begin his pro career whenever Flint’s season comes to an end.
Advertisement
Ad
Advertisement
Ad

Big night for #LeafsForever  prospect Braeden Kressler who now has 7 points through his first 3 games of the season.

The Leafs dipped into the Russian goaltending pool for the second straight year when they selected Peksa in the sixth round of the 2021 draft. He went undrafted in his first year of eligibility, but his .909 SV% at the Russian junior level and athletic profile were enough for the Leafs to take a swing on him as an overage prospect.
Last season was something of a breakout year for Peksa as he took over as Irbis Kazan’s full-time starter, posting an impressive .936 SV% in 56 games. He surrendered the starting job to fellow Leafs prospect Artur Akhtyamov to begin the postseason, but after Akhtyamov struggled, Peksa reclaimed the crease and posted a .919 SV% through 13 playoff games, nearly leading his club to an MHL Finals berth. With Akhtyamov loaned to another club to begin the 2022-23 season, Peksa has graduated to being the full-time starter for Kazan’s VHL club. He was one of the league’s hottest netminders to start the season and has maintained his solid play in his first professional season, owning a .920 SV% through 33 appearances.
Advertisement
Ad
Advertisement
Ad
Peksa is an athletic netminder who plays an aggressive style, relying on his reaction time and fluid movements in the crease to actively challenge shooters. He still has a lot of maturing to do physically, and it will be interesting to see how that affects his style of play as he continues to develop, but he has shown steady improvement each season since being drafted. Goaltenders are always difficult to project, but the Leafs have to be pleased with what Peksa has shown so far.

Big weekend for #LeafsForever goaltending prospect Vyacheslav Peksa who stopped 56 of 58 shots in a pair of wins. He is now up to a .928 SV% through his first 11 VHL games. pic.twitter.com/vSMrlhLTKy