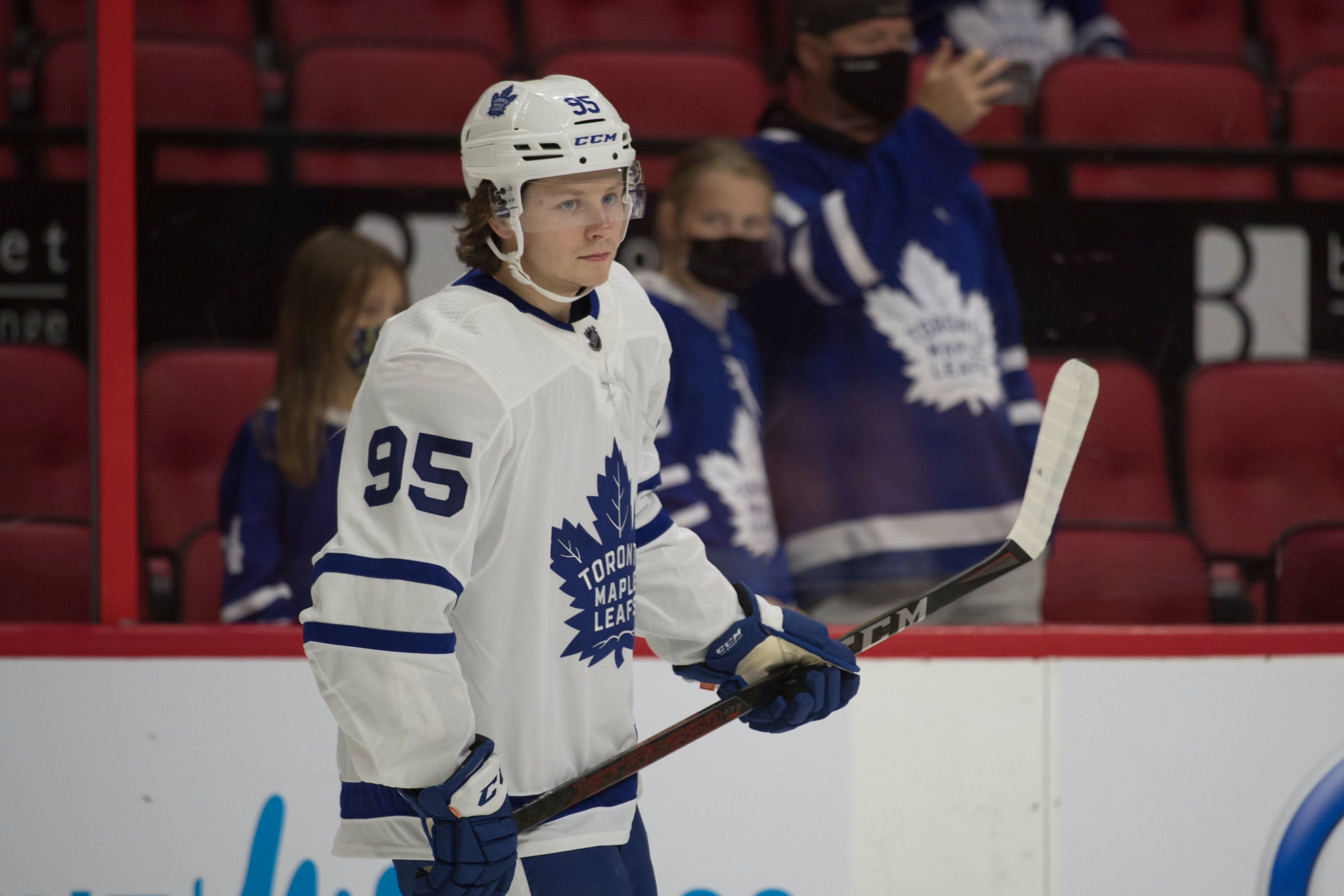 Photo credit: © Marc DesRosiers-USA TODAY Sports
By Nick Richard
21 days ago
Comments
With the calendar turning over to 2023 and a spectacular World Junior Championships signaling the unofficial halfway point in the hockey calendar, it’s an excellent time to reassess the Leafs’ prospect pipeline. There have been some standout performances by players throughout the system and underwhelming starts for others, leading to some noteworthy changes from TLN’s most recent prospect ranking in the offseason.
We got things kicked off yesterday with a handful of honorable mentions, which you can check out here:

Today, we get into the countdown, starting with the organization’s 20th-ranked prospect and working our way down. The depth of the Leafs’ prospect pool has improved significantly over the last couple of years, which is illustrated by some of the names that make up the first part of our countdown. Toronto’s system might not be overflowing with high-end, blue-chip prospects, but there is an abundance of players in the pipeline with varying degrees of upside and NHL potential.
While I have consulted TLN colleagues and others who are familiar with the Leafs’ prospect pool, these rankings are purely my own. Following the criteria from past TLN Prospect Rankings, only players who are under the age of 24 and have played fewer than 42 NHL games are considered “prospects.” As a result, players such as Mac Hollowell, Joseph Woll, and Joey Anderson weren’t considered. 2020 first-round pick Rodion Amirov has also been excluded, as the primary focus remains his health and well-being as he continues to undergo treatment for a brain tumor.
Advertisement
Ad
Advertisement
Ad

Akhtyamov had an up-and-down 2021-22 season, mostly playing for Bars Kazan in Russia’s second-tier pro league, the VHL. He posted a respectable .912 SV% over 38 games but struggled mightily when he was loaned to Kazan’s junior team for the MHL playoffs, eventually surrendering the starting job back to fellow Leafs prospect Vyacheslav Peksa. With a potential logjam brewing in Bars Kazan’s crease, the club loaned Akhtyamov to Neftyanik for the 2022-23 season, giving both netminders a chance at consistent playing time in the VHL.
To say that Akhtyamov has taken that opportunity and run with it would be an understatement. He has been the best goaltender in the VHL this season, sporting a 17-8-3 record with six shutouts, a sparkling 1.63 GAA, and a ridiculous .946 SV% through 29 appearances. Neftyanik is Kazan’s secondary affiliate in the VHL, and with their KHL goaltending situation solidified, a call-up to Russia’s top level appears unlikely this season despite his spectacular numbers.
Advertisement
Ad
Advertisement
Ad
With the season he is putting together, you might be wondering why he is just barely cracking this list of the organization’s top-20 prospects. While his numbers have been incredible, the VHL is known for inflated shot totals, and there isn’t a huge sample size to go off of in terms of comparables who have come out of that league and gone on to find NHL success. And while Akhtyamov is a strong positional goaltender who scans the play well with the athleticism to make out-of-the-box saves, he lacks the size that NHL teams covet so dearly in net. There is no question that he has taken a step forward, however, and the next step will be proving he can do it against more difficult competition.
Akhtyamov’s contract with Kazan expires at the end of this season, and a visit to Toronto last summer indicates that he is open to crossing the pond, so it will be interesting to monitor his situation in the coming months. Signing another short-term deal in the hopes of earning a shot in the KHL seems likely, but don’t be completely shocked if the Leafs get his name on a contract before next season.
Advertisement
Ad
Advertisement
Ad

#LeafsForever prospect Artur Akhtyamov picked up his second shutout of the season today, stopping all 29 shots he faced. He now has a 1.74 GAA and .940 SV% through 12 games. pic.twitter.com/8mVzDmDTKC

Abramov emerged as one of the organization’s more promising prospects following an impressive draft+1 season that saw him put up 76 points in 63 games for Victoriaville back in 2019-20. It has been a tough go for him since turning pro, however, and he has been surpassed by other up-and-comers in the organization.
With centers Adam Brooks, Mike Amadio, and Kirill Semyonov departing from the organization early on last year, Abramov was probably tasked with too much in his first professional season. He played a top-six center role for much of the season, and his deficiencies away from the puck were amplified by the role he was forced into. He did manage a respectable albeit unspectacular seven goals and 21 assists in 66 games, but it was clear that he wasn’t ready for consistent top-six minutes in the AHL.
Advertisement
Ad
Advertisement
Ad
Looking to bounce back in 2022-23, Abramov missed training camp and the beginning of the season while recovering from an injury, putting him in a tough spot in a crowded Marlies’ lineup. With a deeper forward group this season, Abramov has been slotted more appropriately, and while he has tallied nine points through his first 20 games, he still hasn’t looked like the same dynamic threat that he was in Victoriaville.
Abramov is a shifty and creative forward with good playmaking vision and the ability to put touch on his passes. Viewed as more of a playmaker when he was drafted, his shot became an increasingly dangerous weapon as he progressed through junior. Those skills haven’t quite translated to the AHL just yet, as it appears things are still moving a bit too fast for Abramov at times, and he still looks too passive as he often sticks to the perimeter. Those offensive instincts and that shot are still in his repertoire, but he’ll have to show he can utilize them at the AHL level in order to start his climb back up the organizational depth chart.
Advertisement
Ad
Advertisement
Ad

Mikhail Abramov dances around one defenceman and snipes it. A beautiful goal for his 3rd of the season.#Marlies up 2-0 over Belleville in the second period. pic.twitter.com/Vr26t06cLr

Kokkonen is never going to be an offensive driver from the back end, but his mature and refined defensive game is still reason enough to believe he will play NHL games at some point in his career. It has taken some time for him to adjust in his first full season in North America, but he is becoming one of Marlies’ head coach Greg Moore’s most trusted blueliners since returning from a short tour with Newfoundland in the ECHL.
This isn’t Kokkonen’s first stint with the Marlies, however, as he showed off some uncharacteristic offensive flair when he registered a goal and six assists in an 11-game audition with the club at the end of the 2020-21 season. The points have been more difficult to come by this year, but Kokkonen has brought solid defensive zone play and adequate puck-moving ability to the Marlies’ blue line. He’s far from flashy, but he maintains responsible positioning and has a good stick to disrupt passing lanes or shot attempts.
Advertisement
Ad
Advertisement
Ad
Set to turn 22 years of age later this month and already with a wealth of pro experience from his years in Finland, Kokkonen is a prospect with a relatively high floor which helps to mitigate his limited upside. He isn’t likely to ever grow into a top-four NHL defenseman, but he profiles as a player who can eventually be the defensive conscience on a third pair with a more active partner. Even if he never develops into a full-time NHLer, he is already close to being capable of filling in for spot duty, and that is enough to claim the 18th spot on this list.

Mikko Kokkonen with a great stick to create a turnover for the #Marlies.

Alex Steeves and Max Ellis team up for the give and go, but Steeves' shot just goes wide. pic.twitter.com/YUmebn72Qz

Given where Lisowsky landed on most public draft rankings, some might say he fell into the Leafs’ lap when they selected him 218th overall with their final pick of the 2022 NHL draft. He was the 91st-ranked prospect on last season’s TLN Consolidated Draft Rankings and was ranked as high as 53rd by McKeen’s, but likely slipped due to concerns over his lack of size and high-end skating ability.
Advertisement
Ad
Advertisement
Ad
He finished the 2021-22 season with the third most goals among WHL draft eligibles, just behind Matthew Savoie and Jagger Firkus, who were chosen ninth overall and 35th overall, respectively. He has kept up the goal-scoring prowess in his draft+1 season, already with 20 goals to go along with 19 assists in 33 games – good enough for a 40-goal, 78-point pace over the course of a full WHL season.
Scoring in junior isn’t necessarily a precursor to being able to score at the pro level, but Lisowsky has some translatable traits that give him a real chance to get there. He has an exceptional release on his wrister to go along with a heavy one-timer from his off-wing, and while he doesn’t have blazing speed, he displays good agility playing through traffic in the middle of the offensive zone. He uses that agility and edgework to beat defenders on cutbacks or quick changes of direction, opening up that extra bit of room to shoot.
Advertisement
Ad
Advertisement
Ad
Lisowsky is still very much a project, and the transition to professional hockey could prove difficult with his lack of size or elite speed, but he is a competitive player with legitimate goal-scoring upside and plenty of time to develop.

#LeafsForever prospect Brandon Lisowsky with a wicked wrist shot to snipe home his 20th goal of the season.pic.twitter.com/Y8aDWie4aT

Having already passed through the NHL draft once, Grebyonkin wasn’t on many people’s radars before the Leafs selected him in the fifth round last summer. After scoring 12 goals and 22 assists in 54 MHL games during his first year of draft eligibility, he exploded for 17 goals and 47 assists in 58 games in 2021-22, prompting the Leafs to call his name on draft day.
The pick was a bet on upside, and though it is still very early, Grebyonkin has made that bet look like a good one. He made Magnitogorsk’s KHL roster to begin the season but mostly served as an extra forward before being loaned to another KHL club in Amur Khabarovsk. Since the loan, Grebyonkin has been playing a consistent top-six role, and he has been productive in those minutes. He has registered five goals and 10 assists in 28 games with Amur, leading all 2022 draftees in KHL scoring – a list that includes first-rounder Danila Yurov and third-rounder Viktor Neuchev.
Advertisement
Ad
Advertisement
Ad
Grebyonkin is a slick playmaking forward with good size who can create offense off the cycle by winning puck battles and getting to the middle of the ice. He has good hands to attack defenders one-on-one or make plays under pressure, allowing him to manipulate passing lanes and find teammates through open lanes. Though he is more of a pass-first player, Grebyonkin also has a strong and accurate wrister that has proven capable of beating KHL netminders.
He isn’t a particularly strong skater, but he has found a way to keep up with the KHL pace, and his production in that league as a teenager is noteworthy. It is still too soon to call this pick a steal or project Grebyonkin as a surefire NHLer, but the early returns on the Leafs’ 2022 fifth-round pick sure look good.
Advertisement
Ad
Advertisement
Ad