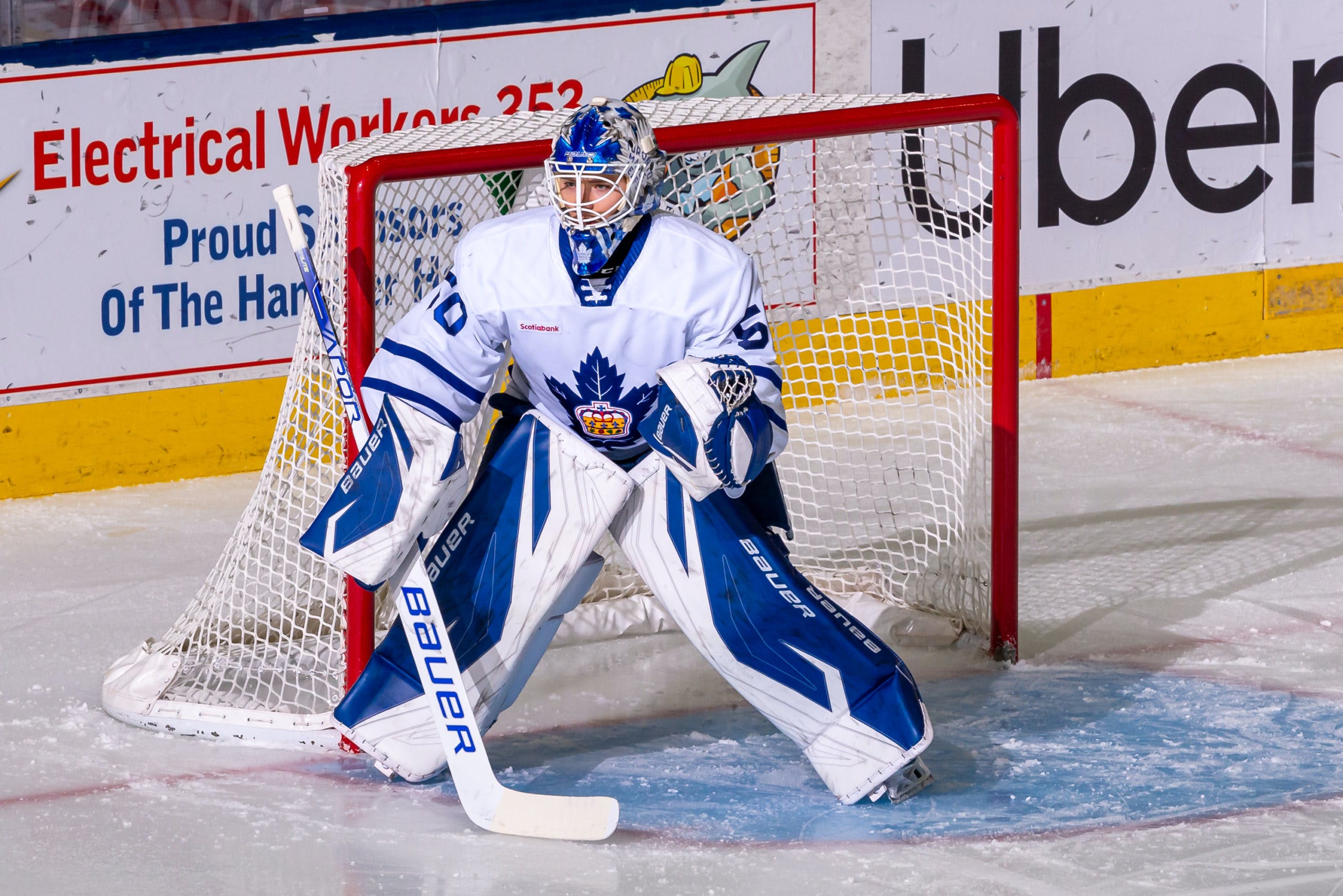 Photo credit: Christian Bonin/TSGphoto.com
By Nick Barden
10 months ago
Comments
Welcome to another edition of the Toronto Marlies Mailbag!
Looking back at the Marlies season before the break, things didn’t feel right. This team, although with a few injuries, was entering this season with a lot of excitement around them. Toronto was 10-9-1-1 prior to the COVID pause, which saw 24 players get the virus.
Now they’re back, and the team looks different.
What I mean by that is the Marlies look like the team they were supposed to be at the start of the season. Why they look like that now is another question.
“Just that they’re working really hard towards getting better every day,” said Marlies head coach, Greg Moore, on what’s stood out about the team most since the COVID pause. “You’ve seen it in the gameplay trending that way. Their preparation and routine before games and in practice is getting stronger and more consistent, and it’s turning into what we’re seeing in the games. And in return, you’re seeing more confident puck play because of these routines that the guys are building off themselves.”
Advertisement
Ad
Advertisement
Ad
Since returning from the break, the Marlies are 3-1, most recently beating Utica, the AHL’s best team. It was only the second time this season in which the Comets allowed six or more goals. Not only does it show that the Marlies are a challenging team to play against, but that they can score too.

Do you think Erik Källgren has an NHL future?

Short answer: Yes.
Long answer: I believe both @Erik Kallgren and @Joseph Woll have a legitimate shot of making the NHL full-time.
In 12 games this season, Källgren has put together six wins and a .919 save percentage. The 25-year-old is a lot different than Woll, who uses his athleticism a lot more in games. Källgren’s movement is incredibly smooth, which allows him to be in the right position at all times to make a save.
Advertisement
Ad
Advertisement
Ad
I’ve said it before, but the 25-year-old also brings a toughness to his game. Just think of @Jack Campbell, but the opposite.
Källgren loves his teammates like Campbell, but he’s not as nice to the opposing team. At times, if there’s a player in front of the Swede, he’ll often let them know by giving them a slash or a push. I don’t see that much anymore, but I kind of like it.
I think he’ll get to the NHL. It’s only a matter of time before Källgren gets a look with the Maple Leafs.

Who has a better future in the NHL. Hollowell or Král?

I believe both players can be of good use in the NHL whenever they arrive.
Heading into this season, @Mac Hollowell wanted to round out his game and provide a lot of offense. With eight points in the 12 games he’s played in this season, it’s safe to say he’s on track to show a lot of people that he can bring scoring as well.
Advertisement
Ad
Advertisement
Ad
@Filip Kral has been relied upon heavily by Moore this season, whether it’s been power play, penalty kill, or even in key moments of the game. Most recently, the 22-year-old has found a home on the top-pairing with @Carl Dahlstrom. He’s playing top minutes and learning everything he can from someone who’s played in the NHL.
Král, though, has also turned up his offensive production as of late, scoring six points in his last six games. He, too, said he wanted more offense from himself earlier in the season.
Both players are highly-skilled puck movers, who can be relied upon in their defensive zone. The biggest hurdle they both face this season is going to be the offensive side, and it looks like they might be turning that corner.

Who’s been the biggest surprise performer to you this season? Curtis Douglas and Bobby McMann are up there for me

Advertisement
Ad
Advertisement
Ad
This is probably the question that I’ve been most excited to answer since I received the notification on Twitter.
What I find most rewarding about covering the Marlies is seeing the players who put in the work to get to the next level. Bobby McMann has done that day-in and day-out — he’s a player.
The 25-year-old signed a two-year AHL contract back in April of 2020 after his final year at Colgate University. I didn’t have a lot of knowledge about him when the signing came about, if I had to be honest. But after watching McMann in parts of two seasons with the Marlies, he’s proved how valuable he can be.
At practices, McMann is always one of the final players off the ice. At the end of Friday’s Marlies practice, players had time to do whatever they pleased. The defencemen did some development, a majority of the forwards were shooting on Woll and Källgren, but McMann was by himself stick-handling through pucks.
Advertisement
Ad
Advertisement
Ad
The 25-year-old has nine points in 18 games and has found himself in the Marlies top-six. Being the captain at Colgate, McMann brings a lot of leadership to the table too. It’s justified by his work ethic.
He works really hard, and it’s going to eventually pay off. Just watch.
Look out for Ryan Chyzowski in the future, too.

With Robertson skating again, on his return to the lineup who goes to the Growlers, and who sits?

If you haven’t heard already, @Nick Robertson has started skating and is likely a few weeks out from a possible return to the Marlies’ lineup. Once that happens, a few players will need to be shifted around, and some sent to the Newfoundland Growlers.
Chyzowski is the first player that I think will return to Newfoundland. Heading back there, the 21-year-old will likely get top-six minutes, something he didn’t get with the Marlies.
Advertisement
Ad
Advertisement
Ad
I believe @Jack Kopacka will be the other player who slots out of the lineup, but stays in Toronto. Both Chyzowski and Kopacka are left wingers and would play where Robertson comes in.
It’s then a matter of shifting players down in the lineup, allowing Robertson to slot in the top-six.

What does Ho-Sang need to work on/show in order to get that contract and call up in the spring?

I wouldn’t say @Josh Ho-Sang needs to work on much. The 25-year-old’s production has slowed a bit, only scoring two points in his last seven games. However, he’s still a threat in every game he plays in.
Ho-Sang has the ability to drive play up the ice, allowing for tons of offensive possession. He carries the puck on his stick like it’s attached to a string. The 25-year-old is an incredibly talented player and I think it’s a matter of whether the Maple Leafs need him.
Advertisement
Ad
Advertisement
Ad
If I had to predict, I think there’s still a 50/50 chance that he receives a contract from the Maple Leafs before the trade deadline.

Will Abramov amount to any NHL future?

It’s best to be patient with @Mikhail Abramov.
I think he’s struggled with the physicality of the AHL in what is his first season. A lot of players do. However, since the Marlies’ COVID break, he’s seemed like a different player.
With four points in his last three games, the 20-year-old seems to be finding himself. Abramov also has 12 points in the 25 games he’s played in this season. As of right now, he most definitely has a NHL future, it’s just a matter of where he wants to be.
Advertisement
Ad
Advertisement
Ad
That’s it for this Marlies Mailbag! I apologize if I couldn’t get to your questions. I really didn’t expect there to be this many.
As of right now, the Marlies are 13-10-1-1 and sit third in the North Division. The team plays one more game at home, before playing their next 10 games on the road.
It’s an exciting time within the Maple Leafs organization for the Marlies. I’m very interested to see how they play for the rest of the season.