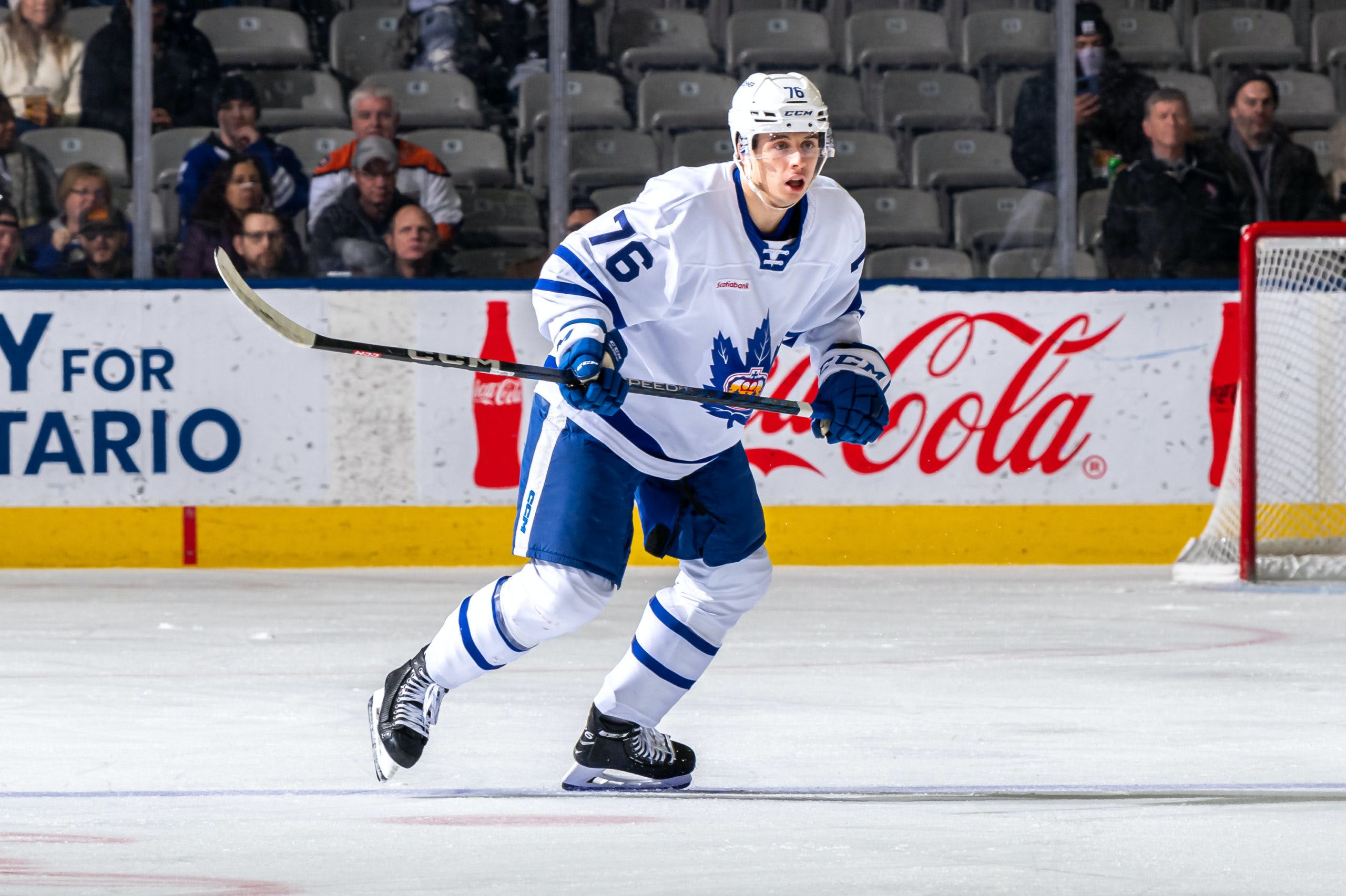 Photo credit: Christian Bonin/TSGphoto.com
By Nick Barden
23 days ago
Comments
First place in the AHL’s North Division, the second-best power play in the league — the Toronto Marlies are having a season.
The team is 8-1-1 in their last 10 games and they’re also two points off the top spot in the AHL. This is something that a lot of people likely wouldn’t have predicted at the beginning of the season.
Toronto is undefeated in 2023 and who knows when their first loss could come. The past two games have gone to overtime, but strong play from both Joseph Woll and Erik Kallgren have kept them from having a game go in the lose column.

Villeneuve is one of the most fascinating players on the Marlies this season. It’s his first professional year, and being a fourth-round pick, his season could could go either way.
As a defenceman coming from junior to the AHL, the initial phase might be a little difficult to get used to. Though over time, things will become easier as you get more comfortable, and stronger.
Advertisement
Ad
Advertisement
Ad
“He’s an impressive hockey player,” said Marlies head coach Greg Moore back in early December. “There’s a lot of things he does with the puck and how he positions himself around the rink in his reads that is elite.
“Once his body continues to develop, and get stronger and faster, then all of a sudden you’re going to see this pop where he’s going to be able to control games offensively and defensively. (He’s) a really special player.”

William Villeneuve with the moves in overtime for the #Marlies.

He comes so close to ending it in OT. pic.twitter.com/7wBoQ33xDD

Villeneuve has definitely found the confidence, but has Moore fully seen the “pop” yet?
“I’ve seen it,” he said on Friday, “He’s come a long way since the beginning of the season. You can see his confidence start to jump with the puck on breakouts, regroups, at the offensive blue line. He’s starting to look like the player he was in junior.
Advertisement
Ad
Advertisement
Ad
“I think it was very smart of him to come in and really focus on defending and our structure, and being responsible so we can trust him on the ice all the time. He was learning the game, the speed of the game, the strength of the game, and now that his brain has computed all that, now he’s starting to pick his spots and find his way back into adding the offensive side of stuff that we know he can do.”

It feels like we discuss the play of McMann every week, but how could you not with the way he’s playing?
The 26-year-old is having a phenomenal season since returning from an injury that kept him out for just over a month.
McMann is currently on a five-game point streak, scoring seven points in that span. He’s also had points in 10 of his 13 games since he’s come back from his ailment.
Advertisement
Ad
Advertisement
Ad

Bobby McMann goes end-to-end and tucks it past Eric Comrie for his 5th goal of the season.#Marlies cut Rochester's lead to one. 3-2. pic.twitter.com/2PNFO3L8Ge

“He’s extremely powerful,” Moore said last week. “It was a great play by him to just drive wide, use his speed, and get to the net. I think the backhand shot is quite underrated for how difficult that was at the speed you’re going.
“And I know that he has more of that. Those were things he was doing a lot last year and he’s trying to get back to it.”
If there’s another player to get called up to the Maple Leafs that’s not named Joey Anderson, I’ll put my money on it being McMann.

The 24-year-old has been lights out for the Marlies all season long and is gaining even more traction after a stint with the Maple Leafs.
Anderson, while up in the NHL, scored one goal in seven games. Often times, when players get sent back down to the AHL, they can be upset or frustrated. But that’s not the mindset of the 24-year-old.
Advertisement
Ad
Advertisement
Ad
“I think it helps that I just love the group down here,” Anderson said earlier this week. “It’s hard to be in a bad mood when you’re with your friends and having fun.
“So, come down here and play a lot and try to have a good impact on the group down here and help this team start a push.”
Anderson has scored four points — two of which that were big goals — in the two games that he’s played in since being sent back down to the AHL.

Joey Anderson scores his second of the game with a great play to kick the puck to his stick and find the back of the net. It's his 13th goal in 23 games this season.#Marlies tie the game at 2. pic.twitter.com/KSugHBZa69

“He’s Mr. Consistency,” Moore said with a grin on Saturday.
Even his teammates see it.
“(Anderson) plays the same way wherever he is,” Adam Gaudette said on Saturday. “He knows what he has to do to be productive out there and he just goes out and does it.
Advertisement
Ad
Advertisement
Ad
“He works hard, gets to the net, does the tough stuff that not a lot of people want to do in this league, and up in NHL.”
One note before we end off this edition of Marlies Weekly: Tommy Miller has been out of the Marlies’ lineup since December 17th. Moore said on Friday that the 23-year-old is currently week-to-week with a concussion.