Advertisement
Ad
Wayne Simmonds gets a second chance with the Leafs 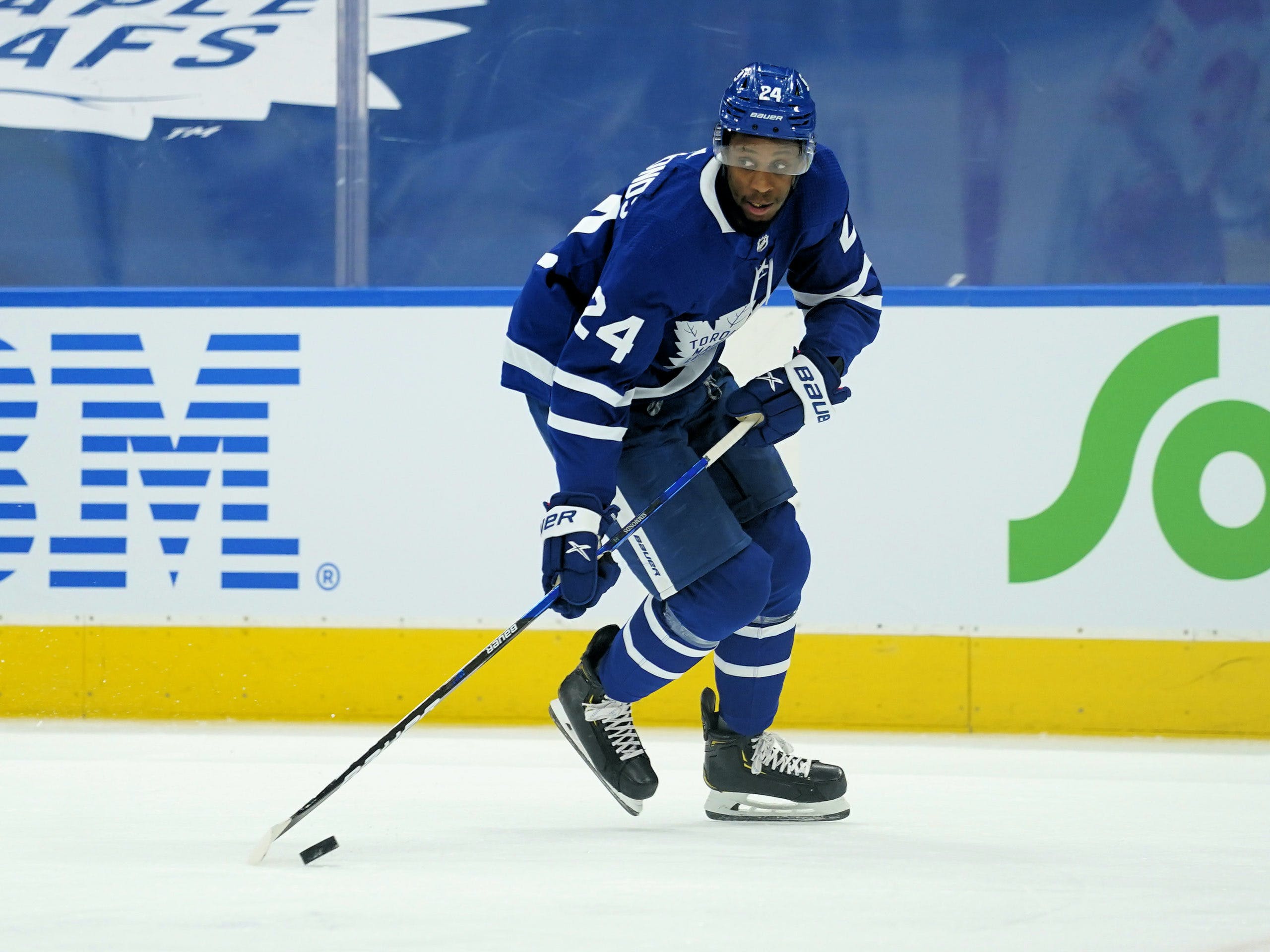 Photo credit: © John E. Sokolowski-USA TODAY Sports
By Nick Richard
1 year ago
Comments
The signing of @Wayne Simmonds on the opening day of free agency in 2020 was met in large part with excitement and anticipation by the Leafs faithful who had longed for the type of grit and physicality that had been absent from Toronto’s roster in recent years. The move wasn’t without it’s critics, however, with some voicing concerns about the aging Simmonds’ declining production and mounting injury history.
The Scarborough native wasted little time making his presence felt with the Leafs, dropping the gloves with @Ben Chiarot to help spark a comeback victory over the Canadiens on opening night. The immediate returns on Kyle Dubas’ mandate to add leadership while making the Leafs a more difficult team to play against were encouraging and Simmonds appeared to be a perfect fit for what the Leafs’ lineup had been missing.

In addition to bringing that bite to the roster, Simmonds managed to lock down the net-front spot on head coach Sheldon Keefe’s top powerplay unit and even ascended to the second line with @John Tavares and @William Nylander for a stint. After a slow start offensively, he had begun to find the back of the net with some degree of regularity as well. He scored his first goal as a Leaf in his seventh game, proceeded to score in each of the next two games, and potted two more goals a couple of games later against the Vancouver Canucks before disaster struck.
Advertisement
Ad
Advertisement
Ad

Simmonds is so elite down low. Gets that up in a hurry. pic.twitter.com/zhhQaBpKBg

In a seemingly innocuous play, Simmonds was hit by a dump out as he applied pressure on the forecheck and suffered a broken wrist that would land him on the shelf for six weeks. It was a cruel twist of fate for a player who had not only been finding his game with a new club, but a player who willfully put his body on the line practically every night. It was just the latest in a long string of injuries for the veteran forward but make no mistake – this particular injury was a fluke, not the result of Simmonds’ body breaking down.
Nevertheless, the injury was a deflating blow and upon his return, he never really seemed to get back to where he was in the early part of the season. There were noticeable issues with his timing and puck control abilities as plays died on his stick all too often down the stretch and even into the playoffs. On top of that, it appeared as though he was never able to fully regain the confidence to mix it up physically as he recovered from the injury.
Advertisement
Ad
Advertisement
Ad

“If you’ve ever broken your wrist, you know how hard it is to come back and have the same hands in tight,” Simmonds said. “You need quick hands, and if you’re not fully healthy in your wrists and your hands, it’s a little bit tougher.”
– via Kristen Shilton & TSN.ca

Simmonds mustered just two more goals in his final 26 games during the regular season and was held scoreless through Toronto’s seven playoff games, but he still managed to put up strong defensive results in the bottom part of the Leafs’ lineup. According to Evolving Hockey, he was also slightly above average with the man advantage, even on a team with such a dismal powerplay unit.

Simmonds’ most common linemates at 5v5 last season were @Pierre Engvall and @Ilya Mikheyev – not exactly offensive stalwarts – and the Leafs will be looking to alter the makeup of their bottom six this summer. Simmonds will still be a part of it, though, after agreeing to a two-year contract extension with the Leafs at the end of June. The accompanying $900k cap hit represents a pay cut on the $1.5 million he earned last season and, in turn, could provide Keefe with more flexibility in terms of roster deployment this coming season. The Leafs were so tight to the cap last season that they were often unable to carry an extra forward and that little extra bit of wiggle room from Simmonds’ spot on the roster could prove valuable.
Advertisement
Ad
Advertisement
Ad
Though his offensive output in the back half of the season was disappointing, goal scoring was never going to be Simmonds’ primary objective with the Leafs. He was brought in to provide experience and leadership to the room while bringing grit and energy on the ice. It may have only been there in flashes but there was an undeniably different swagger to this Leafs team when Simmonds was on his game in the early part of the season and it is easy to envision him having an even larger impact when there are fans in the building to feed off of his energy (hopefully) next season.

"He talks a lot in the room, talks a lot on the bench. We have had I would say a quiet bench here over my time and this season that's been improved greatly. Wayne is someone that really brings a lot to the ice and to the bench."

Simmonds wants to be in Toronto and more importantly, wants to be part of the solution to the franchise’s seemingly never-ending playoff woes. For as much as his game has declined since his peak years in Philadelphia, the soon to be 33-year-old still provides elements that are all too unique on this Leafs roster. The Leafs’ brass identified a deficiency with their team last offseason that they felt Simmonds could address and just because there are other significant changes that need to be made, that doesn’t mean he can’t still be the one to fill that specific role.
Advertisement
Ad
Advertisement
Ad
In order to get the most out of the veteran forward, the Leafs will have to properly manage his usage. At this point in his career he probably shouldn’t be relied upon to play anything more than a fourth line role with a bit of powerplay time, and the odd night off might help keep his body fresh over the course of a full 82 game schedule. If a fourth line featuring Simmonds – and presumably @Jason Spezza – is going to be effective, they are likely going to need the third member of that trio to be someone that plays with a bit more pace than @Joe Thornton was able to provide last season. The organization may have leaned a bit too heavily into their desire to add veteran depth in 2020-21, and though retaining Simmonds signals that this regime still values those attributes, finding a way to better position those players for success will be an area of focus going into next season.
Advertisement
Ad
Advertisement
Ad
There is little risk in bringing him back on a cap hit that can be entirely buried if things really go south and if used properly, Simmonds can still be a valuable member of a winning team. His first opportunity in the Blue and White appeared promising before that unfortunate injury in February derailed his season and you can bet that Simmonds will be as hungry as ever to take the ice in front of a packed Scotiabank Arena to make good on his second chance with the Maple Leafs.

Wayne Simmonds on the potential for fans in the building next season:

"I got a small taste of what it is to be a Leaf, but not the full thing. I've got a two year old daughter and I wouldn't love anything more than seeing her in the stands with a Simmonds jersey on."

Be sure to check out our Wayne Simmonds discussion on the latest episode of the Lamenting the Leafs podcast! Check us out on Apple, Spotify, Google, and SoundCloud!
(Statistics from Hockey-Reference.com &
Evolving-Hockey.com
Contract information from PuckPedia.com)