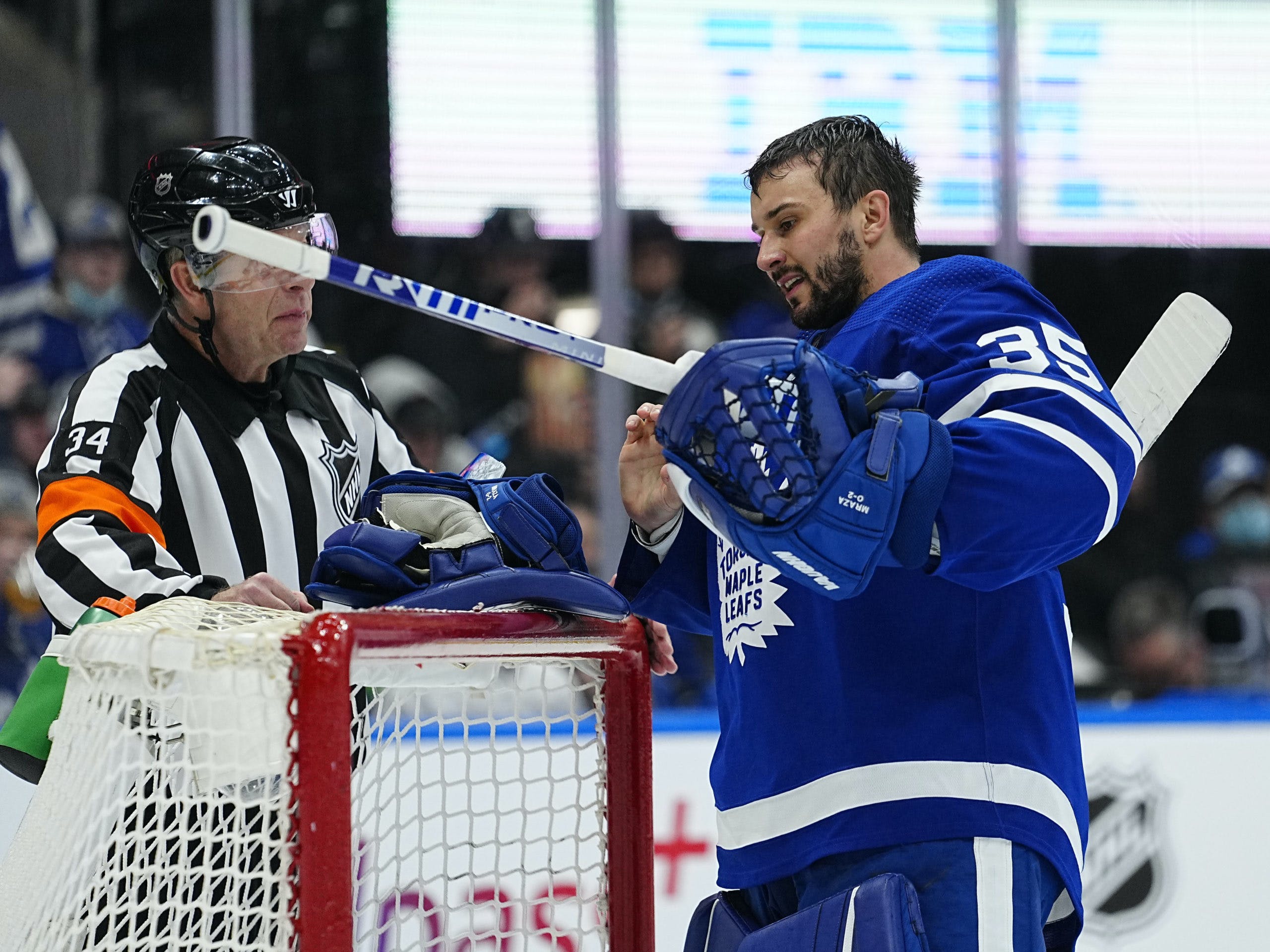 Photo credit: John E. Sokolowski-USA TODAY Sports
By Jon Steitzer
10 months ago
Comments
It was a nice little run, wasn’t it? Jack Campbell looked pretty good last year and this year we were foolish enough to use words like All-Star and Vezina about him back in November. Then that all went to shit. To make matters worse, Petr Mrazek hasn’t exactly looked like a guy wanting to push Campbell for the starter job, and here we are once again, having little confidence in what looked like a pretty darn good team on paper.
Despite just reaching out to the TLN crew a few days ago to talk defense, it seemed necessary to round everyone up and ask another question to the group: What are your thoughts on the current state of Leafs goaltending and where do we go from here?

Goaltending is incredibly voodoo and we are experiencing that first hand with the recent play of Campbell and Mrazek. Campbell was asked to carry a heavy workload for the first few months due to Mrazek missing a lot of time with various injuries. The former did well to start and was arguably one of their most important players. Now we’re in a situation where Mrazek is finally healthy and trying to establish a rhythm while Campbell is regressing to the mean after the hot start and not in his usual routine. It also doesn’t help that the defensive structure in front of them has been a hindrance on most nights.
I think the Leafs should not trade for a goalie cause that would be a knee-jerk reaction to some subpar play over a few week stretch. Kyle Dubas should instead be doing everything in his power to make Campbell and Mrazek’s life easier by shoring up the blueline in front of them. And besides, the Leafs have made it known that they won’t make a big move involving the net until the offseason.
The Leafs are not going to trade for Fleury, Halak, or any other goalie who might become available. They have a capable tandem already and should focus on making sure Campbell and Mrazek have more support in front of them by improving the defense.

As bad as the goaltending has been as of late, there’s not really much Toronto can do. There’s always the possibility that they made a trade for one ahead of the deadline, but even that’s unlikely. It seems like they’re going to have to stick with Jack Campbell and Petr Mrazek for now.
Now, that’s not necessarily a bad thing. It could very well be that Campbell and Mrazek are playing bad at the right time and could come out of this stronger and better. I know it’s weird thinking, but their bad play now could work out for the Maple Leafs closer to the playoffs.
With Toronto needing a forward and a defenceman, it doesn’t make sense to add a goalie at this point in time. Yes, there’s a chance it can get even worse, but I think for now, they have to go with what they have.

From March 20th 2021 until December 1st 2021 Jack Campbell played in 44/55 possible games including the playoffs. He had a save percentage of .932 in those games. This has gone from a few bad games, to a slump to an extended slump for him really fast. Whatever we thought we’d be getting in Mrazek, we haven’t on a consistent basis. Consistency is what separates average players from the stars or greats.
It’s been a combination of the goaltending and defense that has let the Leafs down. We can’t ignore the goaltending woes, but we also can’t afford to solve all. If I had to bet on which would could solve itself or bounce back on its own, it’d be the goaltending.
Now, that doesn’t inspire much confidence but it is what it is. You can’t win if your goalies don’t stop the puck, or your top players don’t score in the playoffs like in years past.
If you sort the NHL standings by points percentage and the season ended today, the Leafs would play the Panthers in the first round. The Panthers started the season 8-0-0. Since then Sergei Bobrovsky has a .907 save percentage. And goalie prospect Spencer Knight is in the AHL with lackluster numbers. Bobrovsky also only had a .902 save percentage the previous two seasons.
I definitely won’t tell you to not be worried about the Leafs goaltending. My finger is close to the panic button, but it’s not on it at the moment. If this keeps up come the trade deadline, I’ll probably be pressing it with tears in my eyes.

Not saying we should have kept Fred (age and money was a concern for a cap strapped team), but considering how much we know about how volatile the position is, we should probably learn that 40-50 games isn't enough to come to a sound conclusion on a goalie's play

Saying this, I also don't think the .893 goaltending we've gotten from Jack these past 20 games is the goalie his is, this is also just a regression back to the norm for him.

That said, I understand the hysteria going into the playoffs because we've seen this team choke hard so many times that we feel like the team has to be flawless to win a round

Letting go of the noise is tough to grasp as a fan sometimes, especially for Leafs fans, but after watching Jonas friggin Korpisalo, a career .903 goalie, post a .956 on the Leafs in the bubble, I've come to accept that this game can be random sometimes

I gotta say, I really didn’t think we’d be back here so soon. I thought we’d get one year of feeling good about Jack Campbell before he imploded, but in some ways, he’s done the Leafs a favour because he spared them what could have been a truly unfortunate contract.
If we’re taking the optimistic look at the Leafs’ goaltending situation, Jack Campbell has shown us what he can play like when he’s on his game. If he gets back to that at the right time, the Leafs will be laughing. Additionally, Mrazek has a history of slow starts with new teams and a few more appearances and he might be comfortable with playing behind the Leafs. The last thing if we’re going to sprinkle in some optimism is the Leafs are 17-8-3 since Dec 1st, and that’s a pretty good record while receiving questionable goaltending. The Leafs wouldn’t be the first team to win despite their goaltender.
Advertisement
Ad
Advertisement
Ad
Now for the pessimism/realism, while people are citing Bobrovsky’s struggles this season as a point of comparison and saying the Leafs don’t need to worry about goaltending, they are ignoring the fact that Florida has the second-best HDSV% in the league while the Leafs have the 4th worst. I think Florida’s funk is more forgiving. There’s also the fact that the goaltending market is limited to question marks or Marc-Andre Fleury. I don’t think the Leafs are going to put up the assets necessary to go after a few months of Fleury. So it seems that if a change is made, it’s more likely an attempt to try someone new, not truly upgrade.
Advertisement
Ad
Advertisement
Ad
As for what they should do, I say hand the net over to Mrazek. Of the two slumping goaltenders, he seems like the one most likely to find his game quickly. He’s also the one under contract for next season so you might want to get him figured out. There’s some hope that a lot of rest might work for Campbell as well. Playing 38 games isn’t what Jack Campbell does, and at any level, Campbell has only played over 40 games in a season just once in the past decade, and that was in the AHL six years ago. The situation isn’t ideal, but there is something comforting about planning for bad goaltending rather than expecting decent goaltending heading into the playoffs. The Leafs have two months to figure out how to play to their strengths instead of trying to repair a weakness that might not be fixable at this point.
Tell us what you think. Are we over/underreacting when it comes to the Leafs’ net? Who can fix it?
More from THELEAFSNATION