Advertisement
Ad
What do the Toronto Maple Leafs have in Fraser Minten? 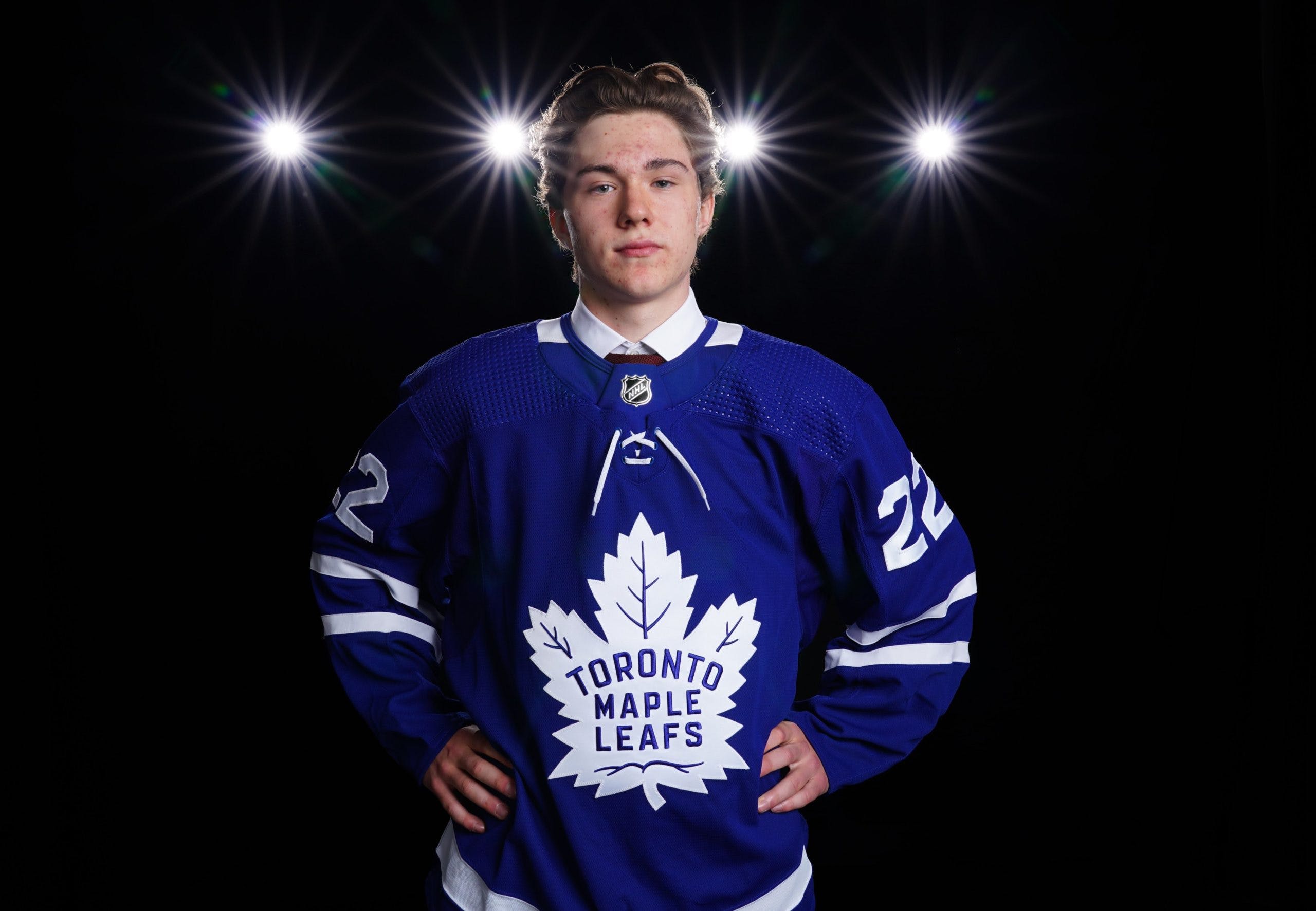 Photo credit: @MapleLeafs
By Kyle Cushman
6 months ago
Comments
As the Toronto Maple Leafs went on the clock at 38th overall last Friday, anticipation was high to see who the newest prospect added to the system would be. When the pick was announced to be WHL centre Fraser Minten, that anticipation turned into a slightly underwhelming reaction.
Minten was a prospect that wasn’t particularly on my radar, often landing in the late second to the early third round on public rankings. As the Maple Leafs didn’t have a pick in this range, I honed in on other prospects ranked closer to their original selection at 25th overall and a bit later in the third round.

Minten was a reach in this spot relative to public rankings, landing in the 74th slot on the consolidated board, but was taken only slightly ahead of where Bob McKenzie had him on his list.
At first glance, Minten comes across as a “safe” pick that fills an organizational need, a player that projects as a defensively responsible bottom-six centre with limited upside beyond that.
Digging into the numbers and watching some of his tape, however, reveals a prospect that has a solid base of tools to build upon that could have untapped higher potential, a sentiment that is clearly shared by the Maple Leafs in selecting Minten in the top 40 and through comments from GM Kyle Dubas following the draft.
Advertisement
Ad
Advertisement
Ad

Minten is regarded as a responsible, two-way centre, and that checks out in the data available through Pick 224.

Playing on a strong Kamloops team, Minten still managed to carve out a role as a middle-six centre and post positive results relative to his team. When Minten was on the ice at even strength, Kamloops scored 63.9 per cent of the goals, 2.4 per cent better than when he was off the ice.
Among draft-eligible players in the WHL that played more than 13 minutes per game, only first-round picks Matt Savoie, Conor Geekie, and Reid Schaefer posted a higher goals-for percentage.
The main aspects that stand out for Minten, statistically speaking, are his high even-strength assist rate and individual shot generation.
Minten’s 20 even-strength assists ranked top ten in the WHL among forwards and were the most among draft-eligible forwards, including top ten pick Matt Savoie. Overall, Minten scored 34 points at even strength, with just five of them being secondary. His raw point totals aren’t eye-popping by any means, but it is a promising sign that when Minten recorded a point, it was often a result of a primary contribution.
Advertisement
Ad
Advertisement
Ad
In terms of his shot generation, Minten’s 13.6 shots per estimated 60 ranked top 20 in the WHL among forwards. What is especially notable about this is that of that group of 20, Minten had the lowest shooting percentage, down at 9.4 per cent.
The average shooting percentage of the top 20, excluding Minten, was 14.2 per cent. Had he scored at that rate, that would have added another 10 goals to his season total of 20.
Now, there are reasons for his lower shooting percentage, which we will get into in a bit. But simply looking at Minten’s statistical profile, he’s a player that already is producing a notable amount of assists relative to his playing time, has been an effective defensive player, and has more goal-scoring upside with his high shot generation and low shooting percentage.
Advertisement
Ad
Advertisement
Ad
This combination of traits makes him an intriguing swing, and that’s even before factoring in his later birthday in June 2004 (one of the younger players in the draft), decent size at 6-foot-1 and 185 pounds, and physical elements of his game.
Finally, on the statistical side of things, an area Minten will certainly need to improve in is the faceoff dot. Part of Minten’s intrigue is his two-way responsibility and projection as a centre. Once play is started, Minten plays a centre’s game, but he will need to improve a fair bit on the draw if he is going to remain a centre into the future.
Minten won just 45.7 per cent of his faceoffs this year for Kamloops, a drop from his 49.1 per cent mark in his abbreviated rookie season in 2020-21. Faceoff skill is one of the more teachable skills in hockey, as showcased by many young players who enter the NHL with a sub-50 per cent win rate and climb up the rankings over their career (@Auston Matthews has added 10 percentage points to his faceoff win rate since his rookie season, for example), so it isn’t a concern by any means.
Advertisement
Ad
Advertisement
Ad

Minten’s shot generation is high due in part to the number of pucks he gets on net from non-threatening parts of the offensive zone. While sometimes this results in a rebound chance for a teammate or a goal as it catches a goaltender in an unsuspecting position, this tendency is a contributing factor to why Minten’s scoring chance rate doesn’t match up with his shot totals and why his even-strength goal total was lower than expected given his shot generation.

Minten has the tendency to shoot pucks from unthreatening areas. His most common shot location this season per Instat was from the left side of the ice, outside the dots. These aren't *bad* plays – they often generate rebounds & many NHL teams play "shoot and retrieve" hockey 1/2 pic.twitter.com/8i7jaWO0iV

This is only further proven by Minten’s powerplay goal total. In a more structured, powerplay setup, Minten was either able to create dangerous chances for himself in the middle of the ice as the bumper or skate downhill and shoot from the left flank. Minten scored 10 powerplay goals in the regular season and just nine at even-strength. As you can see, when Minten has space to shoot, he can let it fly.
Advertisement
Ad
Advertisement
Ad
While Minten isn’t the quickest skater, he was very effective in transition. Mitch Brown’s tracked data had Minten ranked in the 91st percentile in relative controlled entry percentage. Instead of burning defenders with speed, Minten is able to gain the zone through intelligent use of space and quick passing.

Minten's ability in transition seems like it was one of the major draws for TOR. He is methodical, unafraid to reverse to his D when he has no passing options ahead of him, looking for cross-ice feeds, and jumping into space to create give-and-gos when he doesn't have the puck. pic.twitter.com/swHgWN71w1

As evidenced by the previous clip and in his zone entry success, Minten is calm under pressure and can make quick, connecting passes. Whether he’s down low and sending a pass to the open man or it’s a play at the blueline to evade a penalty killer, Minten is successful as a playmaker more from these connecting, quick plays rather than incredible cross-ice passes (although he has shown an ability to do so a few times).
In similar regard to Toronto’s 2021 second-round pick, Matt Knies, Minten looks to get the puck to the middle of the ice often. The aforementioned quick passes supplement his consistent efforts to get the puck to the front of the net, whether that be by driving it there himself (the good) or by throwing the puck towards the net from anywhere in the zone (the not-so-good).
Advertisement
Ad
Advertisement
Ad
Minten’s biggest play of the year, a primary assist on a playoff overtime winner, came from doing just this. In this clip, Minten just misses on the shot attempt but stays engaged in the play. He pressures Seattle forward @Conner Roulette into a mistake, steals the puck, and immediately drives the puck into the crease in a wraparound attempt. The loose puck ends up on the stick of Minten’s teammate, Daylon Kuefler, and the Blazers win the game.
Minten showcases his ability to read the play as a penalty killer in this next clip, getting a stick in the lane and going back the other way for a shorthanded goal. This sequence came later in the regular season, and Minten went on to add another two shorthanded goals in the playoffs.
Advertisement
Ad
Advertisement
Ad

Fraser Minten is a highly competitive two-way forward with a great shot and some offensive skill.

Watch as he starts the play with a good stick on the penalty kill before fighting off a check to get the puck to his teammate before driving the net and finishing the play: pic.twitter.com/mBsfGMt3sh

Finally, here are two of the more “highlight reel” clips from Minten’s season. Minten is given space and he makes the defenders pay, attacking the middle of the ice and creating a goal for his teammate by creating a rebound in the first highlight and passing for a tap-in in the second.

Fraser Minten has a high floor given his two-way game and physical play. Still, it is up to the Maple Leafs development staff to unlock his offensive potential to become a middle-six projection, rather than a bottom-six one.
There are a lot of raw tools in Minten’s skillset. He can read plays defensively, make quick connecting passes, and can shoot the puck when given space. If Toronto can help Minten get a step quicker and improve his offensive zone decision-making, there is definitely more upside to be unlocked.
Advertisement
Ad
Advertisement
Ad
To an extent, this selection reminds me of the Matt Knies pick last year. Knies had an underwhelming draft year in his overall totals, remaining stagnant from a strong DY-1 campaign. Looking into his season splits, however, revealed a putrid first half that COVID and a fluctuating schedule derailed and a dominant second half that showcased the talent that Knies would use to burst onto the scene this past season in the NCAA.
While Minten’s splits are by no means as drastically different as Knies’ in 2020-21, Minten played his best hockey at the end of the regular season and into the playoffs. He scored 32 points in the first 42 games of the season (0.762 points per game) before finishing the year with 39 points combined in the final 25 games of the regular season and 17 playoff games against top competition (0.929 points per game).
Advertisement
Ad
Advertisement
Ad
Fraser Minten wasn’t the flashiest name available at 38th overall, but upon closer review, the data and the tools he showcased reveal an intriguing prospect that continues to diversify the elements in the Maple Leafs system. I’m looking forward to watching him at development camp and the Traverse City prospect tournament in the next couple of months before he returns to Kamloops for the 2022-23 season, where the Blazers are set for a massive year as hosts of the 2023 Memorial Cup.
Statistics from Pick 224 and Elite Prospects. Video from WHL.ca
More From TheLeafsNation.com: