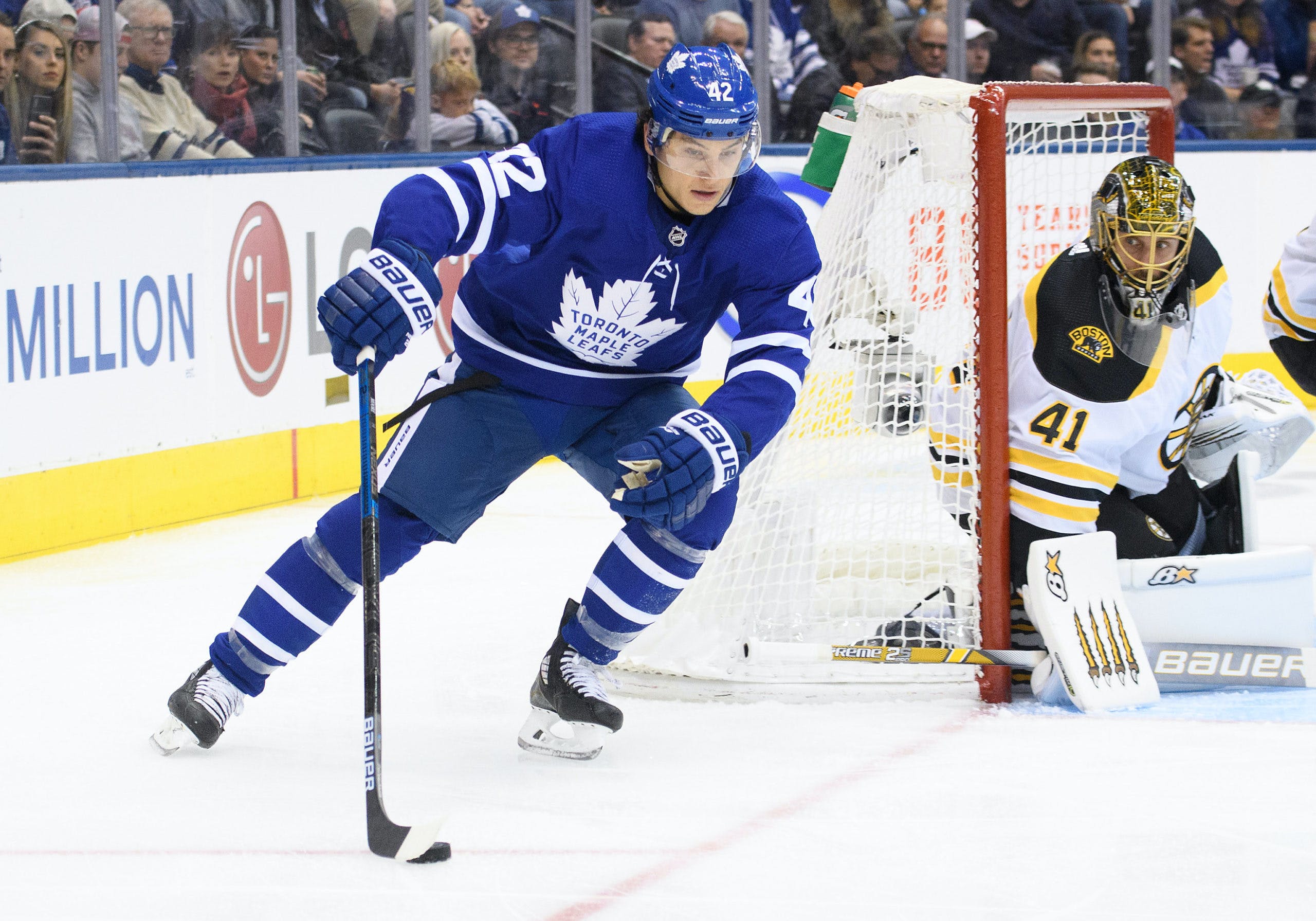 Photo credit: © Nick Turchiaro-USA TODAY Sports
By Kyle Cushman
1 year ago
Comments
Every year, a large group of undrafted free agents attend development camps and rookie tournaments around the league. Teams bring these players that they have varying degrees of interest in to get a closer look at them, before sending them back to their junior leagues in the hopes of being drafted the next time around.
And with that, every year we see “overage” prospects drafted relatively high. No matter the draft class, you can find numerous prospects that had been passed over in previous drafts selected as high as the top 100. Most just accept this as a reality of the draft, that once the draft is over you have to wait another year to have a crack at bringing these prospects into your organization. This isn’t exactly the case, however.
Advertisement
Ad
Advertisement
Ad
For NCAA bound prospects and those based in Europe, there isn’t much an NHL franchise can do. NCAA players cannot be signed to NHL contracts, so any NCAA prospect would have to forgo their collegiate career in order to turn pro. It is highly unlikely that an invite would forgo their collegiate career in order to join an organization, especially when these invites are often entering their first or second years of college. As for the European-based prospects, the CBA does not allow them to sign with an NHL team until their draft eligibility has expired.
That said, there is one significant league where you can sign prospects still eligible for the entry draft: the Canadian Hockey League.
It’s a rule that most are unfamiliar with. All players that have their rights owned by a CHL team that has been eligible for the NHL draft are allowed to sign with an NHL franchise prior to the start of the following CHL season. For all intents and purposes, NHL teams have about a three-month window from the end of the seventh round to the beginning of the CHL season to sign any overage prospect from the CHL to an entry-level contract.
Advertisement
Ad
Advertisement
Ad
That’s where we get to the Leafs.
Toronto has had a notable list of development camp invites since 2016. Despite the array of intriguing free agent talent that has been brought through camp, only once have the Leafs actually signed one of those players to an entry-level contract: Trevor Moore in 2016.
Moore was a no-brainer to sign. He was a productive player as a draft-eligible in the USHL and had a stellar three seasons at the University of Denver. Moore would’ve been a sought after collegiate free agent had he played out his college career, but the Leafs convinced him to leave early and turn pro after an impressive showing at the 2016 development camp.
Moore is the only invite the Leafs have signed, but there should’ve been multiple others. Looking over the past four development camps (2016, 2017, 2018, 2019), there have been nine invites that have gone on to be drafted and 10 others that signed NHL contracts as free agents.
Advertisement
Ad
Advertisement
Ad
Only two players from this group have appeared in NHL games so far (Trevor Moore, Taro Hirose), but for the likes of Sean Durzi, Connor Dewar, Mac Hollowell, Egor Sokolov, and others, they’re still young prospects who have NHL potential.
The undrafted free agents are less notable given they are almost exclusively collegiate players who signed entry-level contracts following their senior collegiate season. The aspect where the Leafs are leaving value on the table is in the drafted prospects.
Three prospects invited to Leafs development camp since 2016 went on to be drafted in the top 100. If signing them to an ELC had been of mutual interest, that’s the equivalent of adding a free second or third-round pick. In the 2018 draft, the Leafs used two draft picks on prospects they could’ve simply signed the offseason prior when they were at their development camp in Sean Durzi and Mac Hollowell, for example.
Advertisement
Ad
Advertisement
Ad

Utilizing this window after the draft but before the start of the CHL season to add prospects to your system has been not been used enough by the Leafs, especially considering the quality of invites they have year in, year out. And that’s just by looking at the players that have specifically attended the Leafs development camp, there are many more examples league-wide including the 2021 35th overall selection Ryker Evans.
The team that has gained the most from these types of signings recently is the Philadelphia Flyers. Philippe Myers attended Flyers camp after going undrafted in 2015, signing an ELC prior to the start of the QMJHL season after impressing the staff. He went on to break out as a big, puck-moving defenceman who was on the Flyers roster within four seasons. Probably biggest of all, he was a significant piece traded to Nashville this past offseason to acquire Ryan Ellis.
Advertisement
Ad
Advertisement
Ad

The #Flyers have signed D Philippe Myers to an entry-level contract → http://t.co/5U9cWypFQU

Philadelphia could’ve waited on Myers, given he scored just eight points in his draft year. Instead, the Flyers pounced when the opportunity arose and snagged a prospect that would have been drafted well inside the top 100 the following season for nothing.
They did it again three seasons later when Egor Zamula came rolling through their development camp. Again, rather than waiting it out, the Flyers signed Zamula ahead of the 2018/19 WHL season where he would break out and become one of the top prospects in their organization. Once again, the Flyers proactivity in signing Zamula got them a prospect that would’ve been drafted in the top 100 for nothing.
Advertisement
Ad
Advertisement
Ad

Myers and Zamula are the best-case scenarios, of course. More often than not an undrafted prospect will be closer to Cody Donaghey (signed by the Leafs after the 2014 rookie tournament) than Philippe Myers, but the point remains that teams should be rolling the dice much more often. As long as the invite is interested in signing, which for these CHLers there isn’t any downside to signing, it doesn’t make sense to repeatedly have promising players come through and not pluck one or two.
The Toronto Maple Leafs only used three picks in the 2021 draft. With the likes of James Hardie, Braeden Kressler, Lleyton Moore, and others remaining with the team at the Traverse City rookie tournament, why not roll the dice on another prospect for next to nothing?
Advertisement
Ad
Advertisement
Ad
Signing undrafted 18 and 19-year-old CHL prospects has been an underutilized tool for NHL teams, as evidenced by the two home runs hit in recent years by the Flyers in Philippe Myers and Egor Zamula. For a team like the Maple Leafs who have traded a lot of draft capital the past year, it only makes sense to “buy” some of it back in the undrafted free agent market.