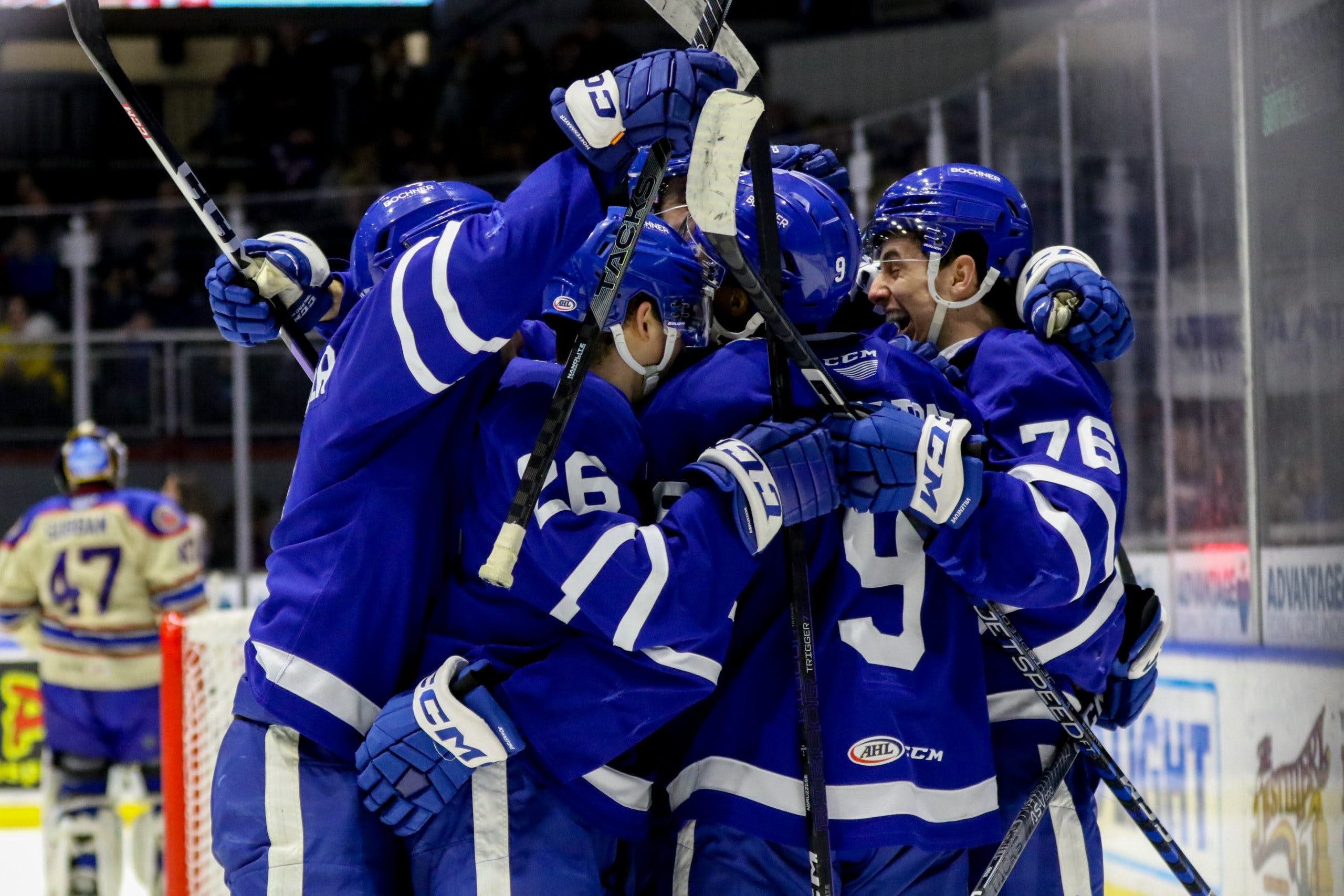 Photo credit: @TorontoMarlies/Twitter
By Nick Barden
16 days ago
Comments
Another week, another stretch of games won by the Marlies in what has been a remarkable season to date.
Toronto had four games scheduled throughout the last week, though they only played three. On Friday night, while the Marlies were facing the Manitoba Moose, a fan experienced a medical emergency at the end of the first period.
Both teams — and the AHL — agreed to suspend the game when it was 1-1 after the opening frame. The AHL said the game will be completed at a later date though they haven’t specified when that might be just yet.
The other three games that the Marlies played this week went very well. Matter of fact, Toronto won every one of them.
They defeated Laval 4-2 last Sunday, then beat the Manitoba Moose 3-2 on Wednesday, and after their game was suspended on Friday, the Marlies bussed to Rochester and won their game against the Amerks on Saturday, 7-5.
Advertisement
Ad
Advertisement
Ad
Joseph Woll played in all three wins this week and has since broke the Marlies record for most consecutive wins in a season. And after defeating Rochester on Saturday, the 24-year-old is now undefeated in 10-straight games this season while holding a .926 save percentage.

READ MORE: ‘He’s never out of the play’: Joseph Woll ties Marlies record and could break it with another win

Toronto is currently on a five-game winning streak and they’re also 9-1-0-0 in their last 10 games. A much different looking team compared to last season.
“More than any year I’ve been here, this team and this group is so willing to sacrifice themselves physically for doing the hard things to win hockey games.” Marlies head coach Greg Moore said about his team earlier this week.
“There’s a lot of winning habits in this group and they know to possibly do something great, they gotta do it consistently.”
Advertisement
Ad
Advertisement
Ad

Earlier in the week, the AHL named the players who’ll be travelling to Laval at the beginning of February to participate in the All-Star Classic. Three Marlies will be there when the festivities begin on February 5th.
Logan Shaw, Noel Hoefenmayer, and Woll were the three players selected from Toronto.
Let’s begin with the Marlies’ captain, who’s having a career year in the AHL. The 30-year-old has 42 points in 36 games this season, though more recently he’s put up 12 points in his last six games. Shaw had his first-ever five-point night in Rochester on Saturday.
“You could go on and on about the character he brings to this group,” Moore said of Shaw on Wednesday. “He pushes the group, he pushes himself, he has high expectations of his play on the ice, he backs it up every night.”
Advertisement
Ad
Advertisement
Ad
Hoefenmayer has been one of the many amazing stories from this team thus far in the season. The 24-year-old was quiet in his last five games before entering Rochester on Saturday where he scored a goal and had an assist.
With 27 points in 33 games this season, Hoefenmayer has the fourth-most points as a defenceman in the AHL.
“Limited opportunity last year, I would say. Spent the whole off-season here in Toronto with our development staff really putting in the work,” said Moore on Wednesday. “And what’s really impressed us is how much he’s stepped up physically for our team and sticking up for teammates with a couple fights.
“And his defensive play in the d-zone. And now, he’s found his confidence with the puck as well, putting the puck in the net.”
Advertisement
Ad
Advertisement
Ad
And do we need to say anything else about Woll? Just an incredible return after dealing with two injuries that kept him out for almost eight months.
“It’s impressive to see how much better he’s gotten year-to-year,” Moore said on Wednesday. “This year, he’s putting it all together and looks really solid and confident. He’s relying on a good system and (I’m) proud of him for the work that he’s put in.”

Abruzzese has been putting up some great numbers as of late, scoring seven points in his last five games.
The 23-year-old is climbing the AHL rookie scoring board and now sits in fifth spot for most points — five from first place. Abruzzese is beginning to gain confidence in the league, and with that comes him being more patient and being able to set up more goals.
Advertisement
Ad
Advertisement
Ad
His work ethic has been there all season long, Abruzzese just needed to get comfortable. It seems like he’s found that comfortability, and it looks to be paying off in dividends.

Marc Johnstone scores his first in the AHL. What a play by Nick Abruzzese to evade a Rochester player before finding Johnstone at the back door.#Marlies cut Rochester's lead to one. 4-3. pic.twitter.com/UG3uBfq6aR

“I think it’s just trying to be a little harder to play against,” Abruzzese said earlier this week about what’s working for him right now. “Getting above my check, being a little bit hard on pucks, and then just trying to get to the middle of the ice as much as possible.
“I think it’s something I’m trying to work on, especially down low and on zone-entries, getting to the middle of the ice, because that’s where I can create some time and space and make some plays.”

The remarkable story of Marc Johnstone

Johnstone has been an incredible story for this Marlies team. He spent most of last season with the Newfoundland Growlers and has found a home in Toronto’s bottom-six.
Advertisement
Ad
Advertisement
Ad
On Saturday, the 26-year-old scored his first-career AHL goal. And his second. In watching the clip below, you can see just how loved Johnstone is in the dressing room just by the way his Marlies teammates hug him after he scores.

He’s an impressive player,” said Moore earlier this season. “There’s not a single person in that room that competes harder than him.”
Johnstone’s teammates, well, they agree.
“I don’t think there’s a guy that anyone’s wanted to score for as long as I can remember more than him.” Abruzzese told Marlies play-by-play commentator Todd Crocker on Saturday night. “He’s someone who just comes to the rink everyday and lays it all on the line.
“I think he perfectly embodies the type of game that we try to play. To see him get rewarded not only once but twice and they ended up being two huge goals, we were really happy for him.”
Advertisement
Ad
Advertisement
Ad
This week’s final note is an unfortunate one for Toronto. Mac Hollowell slid into the boards awkwardly on Wednesday night and didn’t return to the game. The Marlies announced a few days later that he would be out “indefinitely” with a lower-body injury.