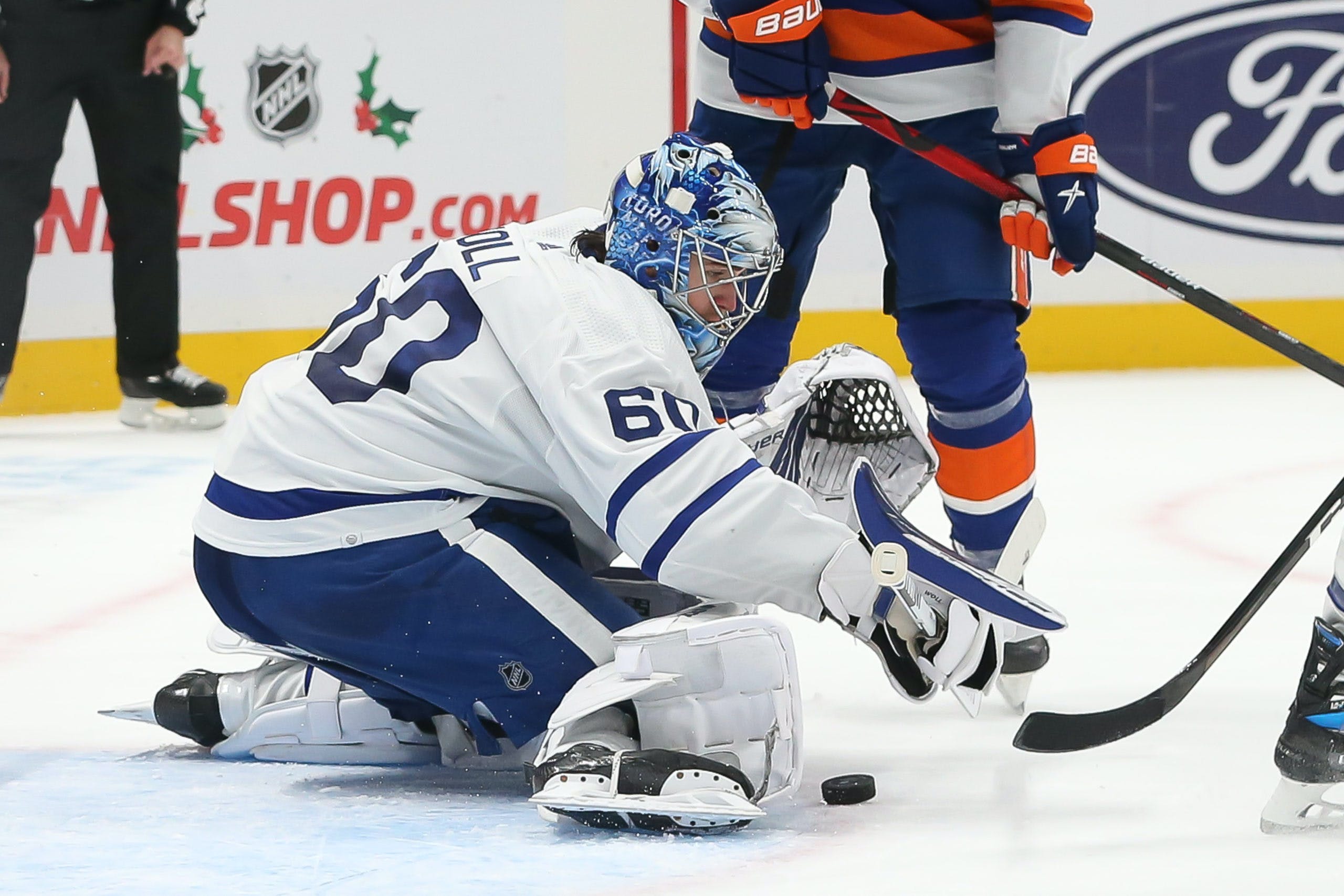 Photo credit: © Tom Horak-USA TODAY Sports
By Nick Richard
1 year ago
Comments
@Joseph Woll wasn’t tested much but he was solid when called upon and earned his first career shutout in just his second start as the Leafs bounced back with a tidy 3-0 win against a struggling Islanders team. The Leafs got back in the win column after having their five-game winning streak snapped by the Penguins on Saturday night and handed a depleted Islanders lineup their sixth consecutive loss. It was the second game in as many nights for the Islanders to open their long-awaited new arena but the Leafs made sure to spoil the party in what was a mostly dominant victory for the Blue and White.
The Islanders have struggled to generate offense during their recent slide and the Leafs did well to limit their opportunities on Sunday night, helping to ease the burden on their rookie goaltender. The Leafs held the Islanders to just six shots on goal in the opening frame and seven in each of the next two periods to outshoot New York 40-20 on the evening, getting back to the strong defensive play that has been on display as they have piled up wins in the last few weeks.
Advertisement
Ad
Advertisement
Ad
After being shutout on Saturday night, Sheldon Keefe made some adjustments to his forward lines. @Michael Bunting returned to the top line alongside @Auston Matthews and @Mitch Marner, @Nick Ritchie got a look on the Leafs’ shutdown unit with @David Kampf and @Ondrej Kase, and @Pierre Engvall was moved to the fourth line with veterans @Jason Spezza and @Wayne Simmonds. The shuffling seemed to work as the Leafs controlled 64% of the expected goals at even strength but it was a shorthanded goal by Marner that got them out to an early lead.

Advertisement
Ad
Advertisement
Ad
Bunting, in particular, looked rejuvenated skating with the top unit and brought energy right from their first shift. The top line had multiple shifts of sustained offensive pressure early on and seemed to be reading off each other well, moving the puck efficiently while hunting pucks and maintaining the cycle with a sense of controlled urgency. It was a strong night for the fourth line as well and Engvall’s speed was a welcomed addition alongside Spezza and Simmonds. He helped to create entries in transition and formed an effective forechecking duo with Simmonds who was all over the puck throughout the game. Simmonds has been snakebitten this season with just one goal to this point but he should be rewarded soon if he continues to generate chances the way he has been. He has been disruptive on the forecheck and is getting to the net with quick hands under pressure, putting himself in position for dangerous opportunities. The Scarborough native has been a bright spot on Toronto’s fourth unit in limited ice time and Keefe rewarded him with a brief look on the second powerplay unit on Sunday night.

Simmonds played 9:36 tonight. Keefe acknowledges he has been deserving of more, got some PP time. "He has done a really good job for us." #Leafs

Advertisement
Ad
Advertisement
Ad
The Leafs controlled the flow of play for most of the first two periods but were unable to extend their lead and were forced to weather a late second period flurry from the Islanders, but that was about as much as Barry Trotz’ squad could muster on the night. Already without @Andy Greene, @Adam Pelech, and @Ryan Pulock, they ran into more injury trouble as both @Brock Nelson and @Noah Dobson were forced to leave the game and those absences were too much for the rest of the lineup to overcome. The Leafs did have to kill off three penalties but the league’s third-ranked PK unit was up to the task as they have been for much of the season.
The duo of Kämpf and Kaše has been one of the stories of the Leafs’ season and they put in another great performance on Sunday night, this time with Nick Ritchie manning the other wing. Ritchie had a solid game with a huge hit early on, and some great work on the forecheck to start the play that would eventually lead to Kaše’s goal that extended Toronto’s lead to 2-0.
Advertisement
Ad
Advertisement
Ad

Nick Ritchie walks through him pic.twitter.com/ledY5QyYAf

It was what is becoming a typical Ondřej Kaše performance as he played with tenacity all game long, made a number of strong defensive plays, and generated offense, both off the rush and on the cycle. The Czech winger has been a favorite of Sheldon Keefe and Leafs fans alike ever since he stepped onto the ice for the Leafs, and he is beginning to see the results of his tireless work show up on the scoresheet with four goals in his last seven games.

Ritchie with a key touch over to Kampf pic.twitter.com/9cfA3hkRn9

Kaše did leave the game a couple of times in the third period – once after a great effort to layout and block a shot and again after he went headfirst into the goal post while driving the net – so his status will be worth monitoring over the next couple of days.
Advertisement
Ad
Advertisement
Ad
The Leafs left no doubt in the third period, choking the life out of the Islanders’ dismal offensive attack while notching a couple of insurance markers in the process. After some defensive lapses against the Penguins on Saturday night, it was a much better showing for the blue line but the story on this night was Joseph Woll. NHL success was no guarantee for the 23-year-old netminder after a few seasons of mediocre numbers in the AHL but his solid performance should serve as a confidence builder, both for Woll and the Leafs.

Bunting was outstanding in his return to the Leafs’ top line, picking up an assist on Marner’s third period insurance goal and leading the team with an 82.94 xGF% at 5v5. He played 14:42, drew two penalties to put him into a tie with for the league lead, had a shot on goal, and added a couple of hits. He applied relentless pressure to the Islanders’ defenders all night and helped to sustain offensive zone possessions for Matthews and Marner to work their magic. His tenacity is something fans have come to expect but he showed off some skill in this game, completing a number of passes in tight spaces in the offensive zone. I think he earned another game with the big guns.
Advertisement
Ad
Advertisement
Ad

Marner had a strong night for the Leafs, scoring the opening goal on a great shorthanded effort in the first period before closing the book on the scoring for the night with a late third period marker. It was a fantastic play as he read the defender’s eyes on the breakout to intercept the pass in the neutral zone before creating the entry and heading to the net to finish off a great feed from Bunting. He was right behind Bunting with an 82.51 xGF% and looked dangerous in the offensive zone all night. The ice was tilted towards the Islanders’ end almost every time the top unit was out there and Marner was a huge part of that.
Advertisement
Ad
Advertisement
Ad

Bunting finds him for the tap-in pic.twitter.com/IHuQyK87pr

Woll didn’t face a ton of dangerous opportunities but he made some difficult stops when called upon to earn his first career shutout. He was tested a few times on the penalty kill and helped to calm things down when the Islanders made a push in the second period by reeling in shots without giving up rebounds. The health of @Petr Mrazek will determine whether Woll gets another start in the near future but his play on this night certainly warrants one.

Listen, I get it. @John Tavares was the Islanders’ captain and he left in free agency. But it’s been over three years and Islanders fans need to move on. Besides, they should probably be booing their own team given the current state of affairs.
Advertisement
Ad
Advertisement
Ad

lol so this is still happening

The Leafs will have a couple of days off before heading out west for a matchup with the Los Angeles Kings on Wednesday night. The Leafs will look to avenge a 5-1 loss at the hands of the Kings from a couple of weeks back as @Jack Campbell figures to return to the crease against his former team. The Kings have gone 2-2-2 since that victory over the Leafs following an overtime loss to the suddenly surging Arizona Coyotes on Sunday night.
The Leafs have won 11 of their last 13 games and will look to start a new streak with a second straight win when they take on the Kings. The last matchup was an off night in what has been an otherwise dominant stretch for the Leafs and they will be eager to make good on that showing.
Advertisement
Ad
Advertisement
Ad
(Statistics from Evolving-Hockey.com and MapleLeafs.com)