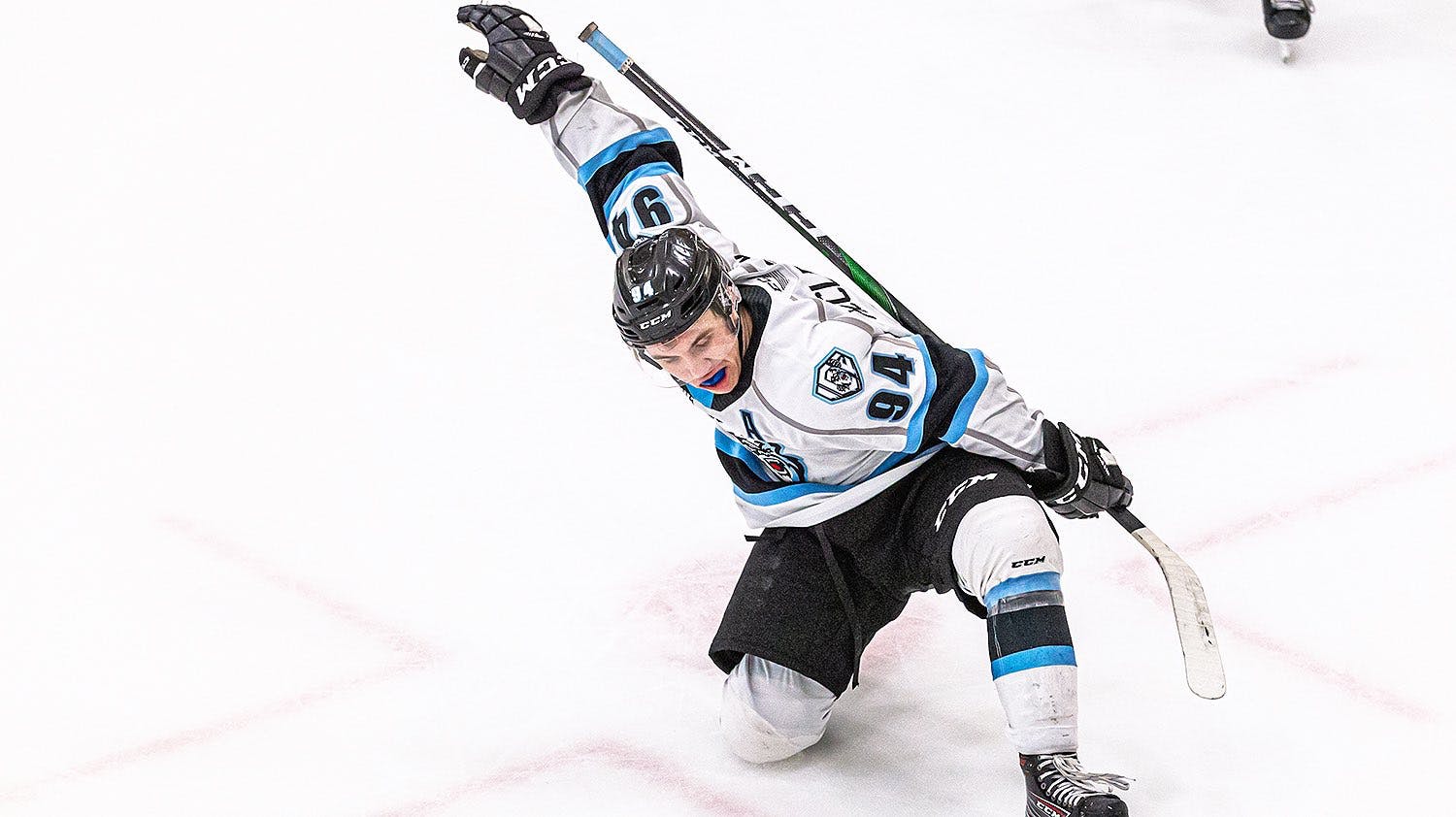 Photo credit: @WHLWPGIce
By Kyle Cushman
6 months ago
Comments
Even with multiple teams still in action in the Stanley Cup playoffs, one of the first significant dates of the offseason is quickly approaching. June 1, this Wednesday, is the deadline to sign certain drafted prospects prior to their exclusive rights expiring.
For the most part, the June 1 deadline this year is the deadline to sign CHL prospects that were drafted in 2020 and for European prospects not based in Russia that were drafted in 2018. Over the past couple of weeks, we’ve seen three prospects sign entry-level contracts that were set to become a free agent or re-entry draft eligible. Tampa Bay signed @Jaydon Dureau, the Islanders inked @Ruslan Iskakhov, and Vancouver locked up @Linus Karlsson.
Even with three of the more notable prospects that were set to expire signing, there is still some intriguing talent whose exclusive rights are set to expire on Wednesday, leaving them either re-entry draft eligible if they are a 2002 birthdate in the CHL or a free agent if they are older.
Advertisement
Ad
Advertisement
Ad
Let’s look at five different prospects who could be of interest.

Drafted by the Calgary Flames in the fifth round back in 2020, it’s a bit of a surprise to see that Ryan Francis has yet to be signed. A diminutive winger listed at 5-foot-9 and 170 pounds, Francis was seen as one of the better value picks of the 2020 draft having scored at over a point-per-game in his draft year with 24 goals and 72 points in 64 games.

Since then, Francis has remained one of the QMJHL’s top playmakers and has taken positive steps over the past two seasons.  He scored 25 goals and 65 points in 54 games this season with the Saint John Sea Dogs, the top offensive team in the QMJHL. While he wasn’t the top contributor on the team, that honour goes to Islanders draft pick William Dufour, Francis was still a top offensive piece that saw his even strength primary point production remain extremely high while improving significantly in his on-ice goal share results.
Advertisement
Ad
Advertisement
Ad
Notably for Francis, he is a late 2001 birthdate, having been born December 2, 2001. As such, he was eligible to play in the AHL this season and actually began the year with the Stockton Heat, playing four games before being re-assigned to Saint John. This means if the Flames do not sign Francis by Wednesday’s deadline, he will become a free agent as he does not have any junior eligibility remaining.

It’s not too often a first round pick finds themselves as part of the group of prospects whose exclusive rights are set to expire at the June 1 deadline, but that’s exactly the case for Minnesota prospect Filip Johansson.
Advertisement
Ad
Advertisement
Ad
Drafted in 2018 with the 24th overall selection, Johansson was seen as a reach at the time and has failed to impress a great deal in the Swedish hockey system. After two lacklustre seasons in the Allsvenskan and the SHL following his draft year, Johansson has put together back to back solid seasons in the SHL with Frolunda. He scored 11 points in 47 games in 2021-22, as well as a strong postseason with five goals and seven points in nine playoff games.

If not for a specific rule, Minnesota probably signs Johansson simply due to the fact they invested a first round pick in him. The problem for Johansson is that if the Wild do not sign him, they instead receive a compensatory pick in the 2022 Entry Draft for losing the rights to a first round selection.
Advertisement
Ad
Advertisement
Ad
For the Wild, Johansson is a fine depth prospect, but his value as a prospect is exceeded by the value of adding a top 60 pick in this year’s draft. Essentially, they’ll be trading Johansson for the 56th overall pick this year, a move that they will happily do and will be confirmed when he goes unsigned following Wednesday’s deadline.
After this point he will become a free agent, and given his pedigree as a former first round pick, it will be interesting to see if anyone takes a swing on him. He’s an average sized right hand defenceman and though his scoring results haven’t been anything amazing, Johansson has shown consistent improvement over the past three seasons.
At 22 years old, though, Johansson’s results both in terms of his scoring rate and underlying numbers are nothing to write home about. He ranked seventh in SHL scoring among U22 defenceman and his 52.6 per cent Corsi for was near the back half on his team. Though he had a strong postseason, the overall mediocre production probably keeps him an NHL free agent for now.
Advertisement
Ad
Advertisement
Ad

Filip Johansson scored 3 goals in 47 regular-season games in the SHL this season.

He now has 4 goals in 6 SHL playoff games including goals in 3 straight #mnwild pic.twitter.com/0Dj534U6Z1

Back in North America, Philadelphia sixth round pick Connor McClennon has done nothing but put up points in his time in the WHL. He scored 49 points in 42 games during his draft year, again scored at a high rate last season with 33 points in 24 games, and has finally put together a full season of games which did not impact his scoring rate at all in 2021-22.
McClennon scored 43 goals and 81 points in 62 games this season with the Winnipeg Ice, often playing alongside top prospect for the 2022 draft in Matthew Savoie. Listed at 5-foot-8 and 161 pounds, McClennon is a goal scorer rather than a playmaker, a big more uncommon for a player of his size. His 43 goals this season ranked sixth in the WHL with a very high rate of scoring both at even strength and on the powerplay.
Advertisement
Ad
Advertisement
Ad

McClennon is a 2002 birthdate, which means if he does go unsigned by the Flyers prior to the deadline on Wednesday, he will re-enter the NHL draft and be eligible to be selected in the 2022 draft. If he goes undrafted, then he would become a free agent with one year of junior eligibility remaining.
I can’t see why a team that would like McClennon enough to draft him wouldn’t then sign him given his production over the past two years, but the Flyers have yet to lock him up. He’s been a top even strength goal scorer for three years now in the WHL and has done enough to earn an NHL contract, we’ll see whether that will be with Philadelphia or another team following Wednesday’s deadline and subsequently the 2022 draft.
Advertisement
Ad
Advertisement
Ad

Tampa Bay has already signed one prospect whose rights were set to expire in Jaydon Dureau, but the Lightning have another interesting draft pick in Declan McDonnell who has set to be signed.
McDonnell, a 2020 seventh round pick, had a strong year in the OHL split between the Kitchener Rangers and Barrie Colts with 62 points in 63 games. He found another level upon joining the Colts, scoring 39 of his 62 points in the 36 regular season games he played with Barrie.

McDonnell’s production doesn’t blow you away when considering he is a DY+2 in the OHL, but digging a bit deeper reveals his strong play. Of his 47 even strength points in 2021-22, just five of those were secondary assists. Using Pick224.com’s estimated time on ice, McDonnell was a top 10 even strength scorer on a per minute basis.
Advertisement
Ad
Advertisement
Ad
Slightly undersized at 5-foot-10 and 190 pounds, on paper McDonnell is a typical Tampa Bay Lightning prospect, so it’s surprising to see that he hasn’t been signed yet. He was voted as a top three worker in the OHL’s Eastern Conference in the 2022 OHL Coaches poll to give you an indication to the type of player he is.
If signed by Tampa, McDonnell has the profile of a player where in two or three years, he’ll be filling a role on the Lightning’s third line and making people say “who is this guy and how did Tampa do it again?” If he does go unsigned, though, McDonnell will be a re-entry for the 2022 draft as a 2022 birthdate and a free agent following that if he were to go undrafted.
Advertisement
Ad
Advertisement
Ad

Declan McDonnell (#25 in navy) fires it home in the center slot for his 19th goal of the OHL season! pic.twitter.com/HXOzVTTFnt

The final player we’ll take a look at today is San Jose’s Linus Öberg, a 2018 seventh round pick out of Sweden.
Over the past three seasons, Öberg has consistently put his shooting on display. He scored 12 goals in 11 games at the U20 level in 2019-20 to earn a promotion to the SHL with Örebro HK and has maintained a spot in their lineup since. This year, Öberg finished second on the team in goals with 17 and fourth in scoring with 26 points, coming in 52 games played.

Öberg’s 14 goals at even strength was tied for seventh in the entire SHL and was tied for the most among U22 skaters in the league. Only Detroit prospect Elmer Söderblom scored more goals than Öberg in total during the 2021-22 season among U22 players. In total U22 scoring, Öberg ranked third behind Söderblom and Sabres prospect Filip Cederqvist.
Advertisement
Ad
Advertisement
Ad
While Öberg’s on-ice goal share results were also superb last season, it should be noted he had an individual PDO of 101.2. His Corsi for of 51.6 per cent does indicate he was pushing play in the right direction.
With 26 points in 52 games in a league as strong as the SHL, Öberg actually ranks as the top prospect yet to be signed using C.J. Turtoro’s NHLe conversions. If unsigned by San Jose, Öberg will become a free agent as he is soon to turn 22 years old.

Data and information from Elite Prospects, CapFriendly, Pick 224
More from The Leafs Nation:
POINTSBET IS LIVE IN ONTARIO