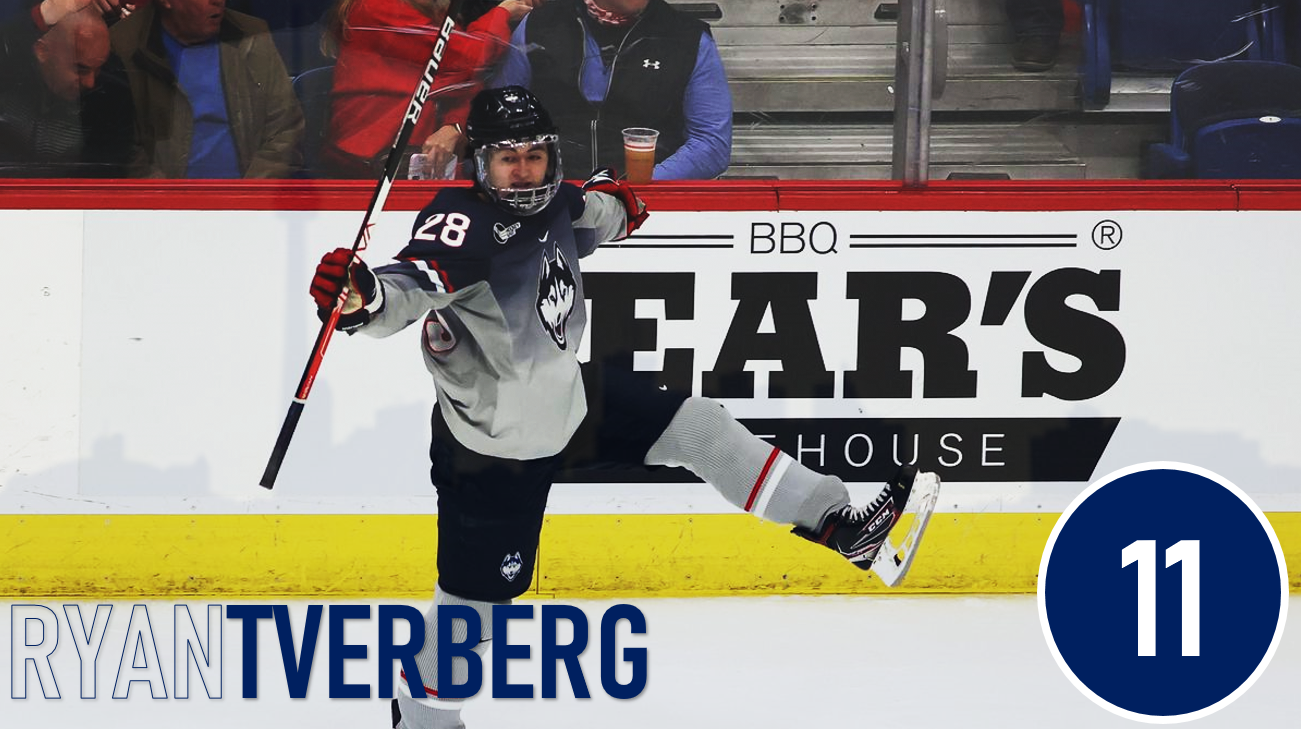 By Kyle Cushman
5 months ago
“Your favourite Toronto Maple Leafs prospect you don’t know about yet.”
That’s the tagline I led with each time I wrote about Ryan Tverberg in the 2021-22 season for our TLN Prospect Roundups, which occurred often given the success he had last year. Over the course of the 2021-22 season, Tverberg went from an intriguing late-round swing to a legit prospect in the system with his breakout campaign at the University of Connecticut.
One of the biggest risers year over year, Ryan Tverberg goes from not even landing as an honourable mention on the TLN Top 20 rankings in 2021 to knocking on the door of the top 10 this time around.

RW | UConn (H-East) | Age: 20 | 6-foot-0 | 190 lbs | Shoots: R
Acquired: 2020 Draft, 213th Overall | 2021 Ranking: N/A
Way back on Day 2 of the 2020 NHL Entry Draft, it appeared the Leafs were done following their 11th selection of the draft. It was a busy day for Toronto, moving up and down the draft board, but with 11 picks already made and no selections remaining for the team, it was more than fair to assume they were done at this point.
But Reid Mitchell, Director of Hockey and Scouting Operations for the Maple Leafs, had other plans. He was pushing hard for a player out of the OJHL with a solid but unremarkable profile. The player was average in size, listed at 5-foot-11 and 180 pounds, and had average production considering the league he was playing in, with just over a point-per-game.
Of course, that player was Ryan Tverberg, becoming Toronto’s 12th and final selection of the 2020 draft when the Maple Leafs traded a future seventh-round pick to Boston to make the selection.
Just over one year later, Tverberg was a Team Canada camp invite for the World Juniors in the midst of a campaign that would land him on First Team All-Hockey East and make him a Second Team All-American and Hobey Baker nominee.
While a couple of OJHL players are drafted every year, it’s rare to see a forward score at only a point-per-game rate in the OJHL and go on to see this success so quickly into his NCAA career. Looking over the past decade, Tverberg’s .889 points-per-game with UConn (32 points in 36 games) is the fifth highest scoring rate for an OJHL alumnus in their DY+2 NCAA season. Of this group, Tverberg had the lowest scoring rate during their draft season in the OJHL, by a fair margin.

Not only has he defied the odds this early, Tverberg excelled in 2021-22 despite only having 14 NCAA games under his belt heading into his sophomore season. Originally a Harvard commit, Tverberg switched to UConn following the cancellation of Harvard’s 2020-21 season due to COVID. As a result, Tverberg trained with a BCHL team for the first semester and joined UConn in the new year.
Sure, Tverberg was an intriguing prospect, but nobody expected this kind of production from him this quickly. In his 14 games in 2020-21, he scored seven points as a bottom-six forward. It was anticipated that Tverberg would be used in a similar role in 2021-22…until his play gave the coaching staff no other option than to give him more minutes.
Tverberg was one of the best 5v5 players in the NCAA this season, with 27 of his 32 points coming at even strength. His season would look even better on paper if UConn had a competent powerplay, as the Huskies had a bottom five powerplay in the NCAA, clicking at just 12.4 percent.