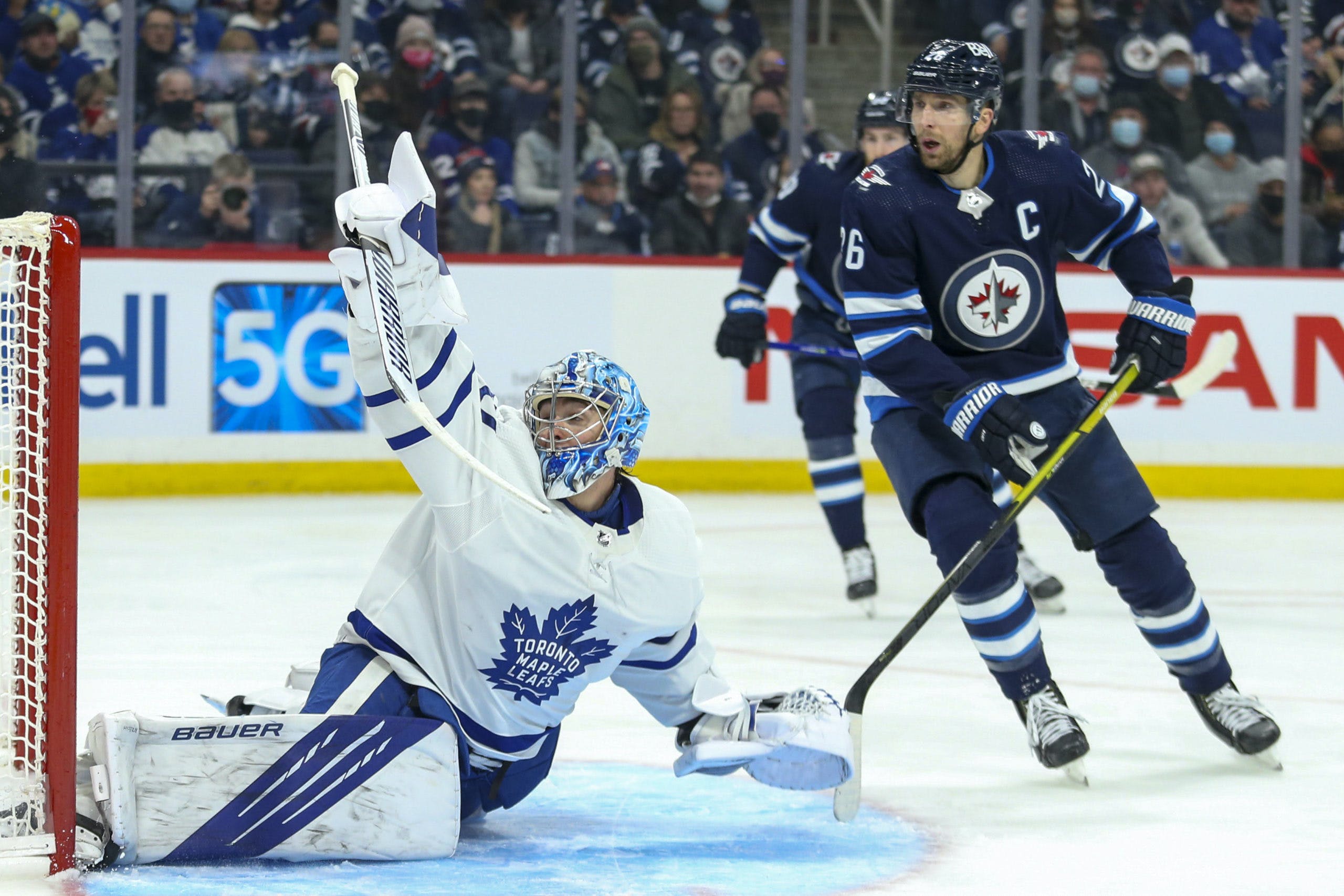 By Jon Steitzer
6 months ago
The TLN prospect rankings are well underway, we’ve already knocked off our no votes, honourable mentions, and the first five prospects on our list. The thing you might remember from when we began this series is that we have purposely kept goaltenders out of it, as they are clearly their own thing. Rather than all of us trying to debate the value of a potential 20 game backup vs. potential bottom pairing defenseman vs. defensive specialist forward, we’re going to admit that it’s hard enough to compare goaltenders to each other let alone skaters.
So instead here are our top five affiliated goaltenders within the Leafs organization that aren’t established NHL goaltenders. So if you are looking for Matt Murray vs. Ilya Samsonov takes, you’ll have to check back likely in September. We do have goaltenders under contract with the Marlies on our list so, there’s that.
The one that thing really needs to be considered by everyone is that we have no idea what impact a goaltending coach change will make. With the exception of Dennis Hildeby, most of these goaltenders were brought in to work with Steve Briere and whether they are a fit for Curtis Sanford will be an interesting transition.
Here are our top five “Leafs” goaltenders outside the NHL.

Recently news came down that Akhtyamov wouldn’t be in the KHL to start the year and would begin the season the Russian minor league (VHL). This isn’t really surprising given that Akhtyamov only had one game in KHL last year and didn’t go well. Generally speaking, last season was a collection of setbacks for Akhtyamov, with his save percentage declining and he didn’t see as much time in the top Russian league as he did the previous year.
Still, last year was about getting reps, and Akhtyamov played a lot more and was healthy, both encouraging signs, and given that he’s a 20 year old goaltender, and has plenty of time to get things on track, he remains a somewhat exciting prospect.
Akhtyamov is under contract for another season in Russia, but given that he was over scouting out Toronto earlier this summer, it seems like the trip to North America could be coming soon.
Of note, the Leafs also have Vyacheslav Peksa in Russia, and the 19 year old has still been playing and excelling in the Russian junior league (MHL). It will be interesting to see if he too can establish himself and soon be ready to come over to North America to work with the Leafs.

We had a tie for fifth place in our goaltender rankings, and Petruzzelli, like Akhtyamov is still a bit on the raw and unproven side of things. He’s been outstanding at the ECHL level, certainly had a strong finish to his NCAA career in his final two seasons, and as I’m sure many will note, you can’t teach 6’5.
Still Petruzzelli did have a struggle with health last year, just like pretty much every Leafs goaltender did, and when he was called up to the Marlies, he was an adequate replacement and didn’t establish himself as someone who would be challenging the status quo.
Petruzzelli is going to change some stiff competition from the other goaltenders under AHL contract, and since Luke Cavallin didn’t make our list, I will say a goaltender like him that thrives when playing a lot could make it tough to take the net back from him if he excels on The Rock.

Dryden McKay is another one of the goaltenders not actually under contract with the Leafs, but one that people are undoubtedly going to have a close eye on. All four years of McKay’s seasons in the NCAA were dominant, but last year finished with a record number of wins and the Hobey Baker award for best men’s collegiate hockey player. There was also that whole thing about him being an alternate goaltender for the Men’s Olympic hockey team, but that led to the challenging part of McKay’s year and he is presently suspended by the US Anti-Doping Agency for testing positive for a banned substance:
Once the time is served it will be interesting to see what the Leafs can do with a goaltender who has a tremendous history of success but seems to be held back by the fact he’s a little smaller than most professional goaltenders. Given that Sanford is a goaltender similar in size to McKay and he had a productive NHL career, he could be the ideal coach to get the best out of Dryden.
McKay is already 24, and that combined with his strong resume might put him ahead of Cavallin and Petruzzelli in the Leafs goaltending depth chart. With Woll not likely ready to return at the start of the season the will be an opportunity to see who else can hang with the Marlies, but McKay’s suspension will likely overlap that time as well.

Last season I didn’t think anyone expected Källgren to see time in the NHL. Why would he? The Campbell and Mrazek tandem looks great, Woll was the exciting prospect, and Hutchinson would surely be the Plan D. Well Plan E was needed and honestly, Källgren did better than anyone could have hoped for. He stole his first start for the Leafs, he held the fort as well as Campbell and Mrazek were doing at the time of their struggles, and likely defined his role as being a Hutchinson type replacement.
Maybe I’m defining his role prematurely as Kallgren will only be turning 26 in October, and now with some NHL experience and some fresh perspective on his goaltending from a new coach, there might be more to unlock here.
Kallgren will get the opportunity to show what he can do to start the season. He will have the net for the Marlies to start with Woll injured and McKay suspended. He also does find himself in a situation where the path back to the NHL could be there via Matt Murray’s injury history.

If it was for the comparison to Ian Scott, Joseph Woll’s injury history during his time as a Leafs goaltending prospect would have looked unimaginably ridiculous. Last season Woll was limited to just 19 games. Fortunately, those 19 games were the best of his pro career, and the now 24 year old still looks to have a good shot at an NHL career.
Woll benefited from getting four games with the Leafs last season, and while not looking like a standout ready to make an immediate impact, he did look like a guy the Leafs can be ready to call on as a depth option when needed, and with a strong year this season, he could be on the radar for a backup role with the Leafs in the next couple of years.
Joseph hasn’t really stood out at the AHL level, but the Marlies goaltending job isn’t the easy gig it once was. His busiest year with the Marlies was his rookie season when he put up a .880 save percentage during a time when he wasn’t ready for that amount of pro work, and the next two seasons are Woll bringing himself back on track.

With some recognizable names still on the draft board sliding into the fourth round, the initial reaction to the Leafs selection of Dennis Hildeby was “who?” He didn’t appear on any draft lists, largely because he’s not just an overager, but he’s in his draft+3 year and will be turning 21 next month. Most “what the hell are the Leafs doing?” questions were immediately answered when taking a look at how Hildeby has performed in the past season and the fact that he’s been trending upwards for three years. This years .931 save percentage in the SHL was hard to ignore even if it is just based on 7 games. It’s worth noting that Hildeby also had a .931sv% in the Swedish junior league.
Now, Hildeby isn’t without a ton of risk. The fact that he had 19 games last year is due to easing him back into hockey after having surgery on both his hips following the 2020-21 season. Hips are pretty important for hockey and goaltenders especially, but he was committed to getting it addressed early to have his best shot at a solid hockey career and it seems to be paying off for him.
Hildeby will be back with Färjestad this season, hopefully playing a bigger role and getting more than seven games. His coach there has a history of producing NHL talent in net, and with the crowded crease situation and new direction with Curtis Sanford, it’s probably best not to rush Hildeby.
At this point Hildeby’s combination of pro success, size, and age make him seem like the netminder with the most potential and he’ll be an exciting prospect to track this year.
Data from Elite Prospects
More from TheLeafsNation.com