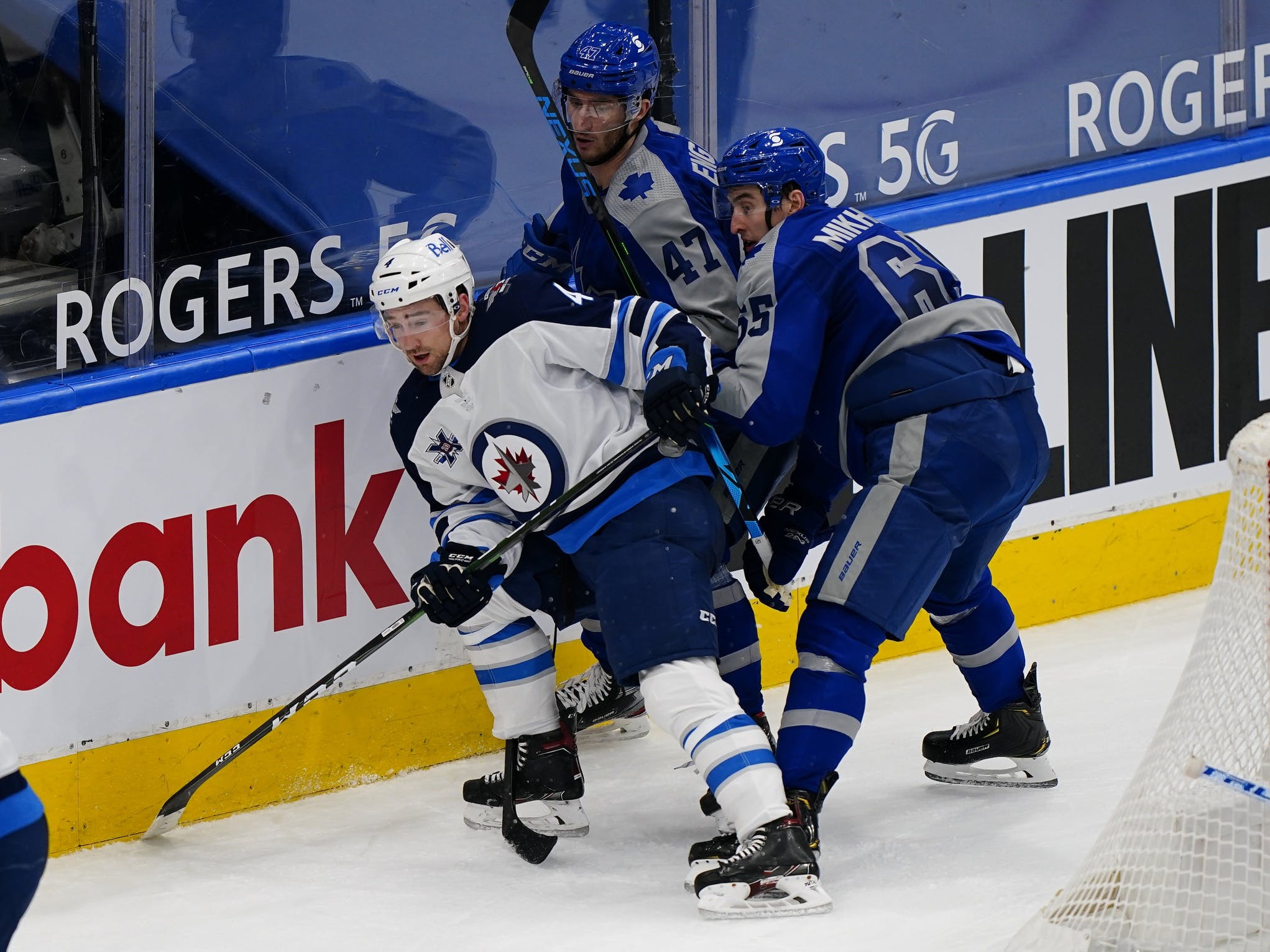 By Ryan Hobart
1 year ago
This year’s Leafs roster has been relatively without controversy in terms of who gets starting positions. It seems that public opinion generally sides with Sheldon Keefe’s roster choices. There was @Justin Holl’s healthy scratch, but otherwise the decisions have all been pretty straightforward.
A lot of that has to do with the team performing at a very high level. Other than @Nick Ritchie and the aforementioned Holl, there isn’t anyone on this roster that’s been below expectations so far this year.
However, relatively soon, @Ilya Mikheyev will be returning to the lineup, and that will pose some difficulty for Keefe. Right now it seems that @Pierre Engvall will be Mikheyev’s top competition for ice time, despite Engvall probably being the 11th best healthy forward on the team, with recent call-up @Joey Anderson biting at his heels and recent re-acquisition @Kyle Clifford being a step behind the undervalued 4th-liner we once knew.
Engvall and Mikheyev fill a similar role for Toronto, being defensively capable, speedy, poor-shooting-but-offensively-capable wingers. Anderson and Clifford are also defensively capable, poor-shooting-but-offensively-capable wingers, and Anderson is not a slow skater by any means. Where the difference lies is that Anderson and Clifford bring a certain bite to the game that the Leafs value. It’s for that reason that it seems that one of them will have a spot in the lineup and one of Engvall and Mikheyev will have a spot in the lineup, not both, in either case.
When comparing their usage, last year Mikheyev was used in a very similar role to what Engvall has been used in so far this year, though Mikheyev has had the odd chance in the top-6 while Engvall has had a few demotions to 4th-line minutes:

For these reasons, it’s prudent to compare the two players and see which one deserves that spot, if that is in fact how the roster decisions shake out. On an emotional level, it’s really hard to pick a favourite here. Mikheyev is such a likeable character that is so sorely lacking in the NHL in general. His love for soup has earned him a cult following. However, as a counter argument, look at this man:

Let’s start simply and build out more complicated as we go. We’ll start with some facts that generally point toward Mikheyev earning the spot:
And some facts that point toward Engvall playing:
The simple facts of the matter seem to generally lean toward to Mikheyev getting the job, but there’s an argument either way on the qualitative facts. As framed by the title, it’s hard to argue that you’re going especially wrong either way.
To get into a more quantitative realm, where I prefer to operate, we’ll start with their respective player cards, as provided by JFreshHockey. These cards use a Wins Above Replacement (WAR) model developed by TopDownHockey.

The first and most important thing to note is that Engvall and Mikheyev have had different roles in their careers, with Mikheyev generally playing higher in the lineup. It’s also interesting that, though from an eye-test perspective, you’d consider Engvall to be a poor finisher, the stats bear out that he’s actually done a decent job at converting his shots into goals.
Engvall is also not much of a playmaker, and has notably played with poorer teammates and against poorer competition, while Mikheyev’s primary assists are very good, which could partially be driven by the higher quality of teammates (QoT).
Interestingly, the WAR model developed by Evolving Hockey paints a different picture:

This graphic shows that Mikheyev is adding to Toronto’s ability to compete in all areas except having basically no impact on the powerplay (where he has rarely played). He is shown to be the player who is above-replacement-level-er (to use a scientific term I made up). In Engvall’s case, he’s break-even on even strength defense, and negative when it comes to drawing penalties (“DRAW.GAR” is drawing penalties, not draws as in faceoffs), the former being contrary to TopDownHockey’s model and popular opinion overall.
The last quantitative tool I’m going to use is HockeyViz’s Isolated Impact, which is similar to a WAR model in that it tries to isolate teammate impacts, the result of that isolation is just presented in a totally different format.
Here is Pierre Engvall’s last 3 years of Isolated Impact:

And here is Mikheyev’s for the last 2 years:

Engvall’s first season showed real promise defensively, but that went away as he moved into more of a 3rd line role and wasn’t use against the weaker competition anymore. He’s had a slightly positive impact offensively these last two years, but it’s definitely not anything to write home about.
Comparatively, Mikheyev’s first season saw him have a pretty significant positive impact on offense, but that drops off in his second season as he was shifted into more of a defensive role. He was mildly successful in that role, being slightly positive on expected goals for (xGF) and slightly negative (that’s a good thing!) on expected goals against (xGA).

I wouldn’t say that any of this really tells me anything other than that both players are fairly mediocre. The title frames this decision as a coin flip, which doesn’t it make it any easier for the coach involved with actually managing these two human beings, but it makes it very easy on me. I don’t have to care whether Keefe gives this third line left wing role to Mikheyev when he’s healthy, or keeps Engvall there. Both players have similar on-ice impact, so I could not care less which one gets the job.
If both get playing time, that doesn’t matter really either, as displacing Kyle Clifford or Joey Anderson from the lineup isn’t going to move the needle really, either.
The only thing we can maybe hope for here is that @Nicholas Robertson gets healthy and is able to come up and steal a job, as that will definitely be more exciting than this debate of six of one, half a dozen of the other.
Uncategorized
Recent articles from Ryan Hobart