All-Canadian Preview: The Ottawa Senators are the division’s punching bag 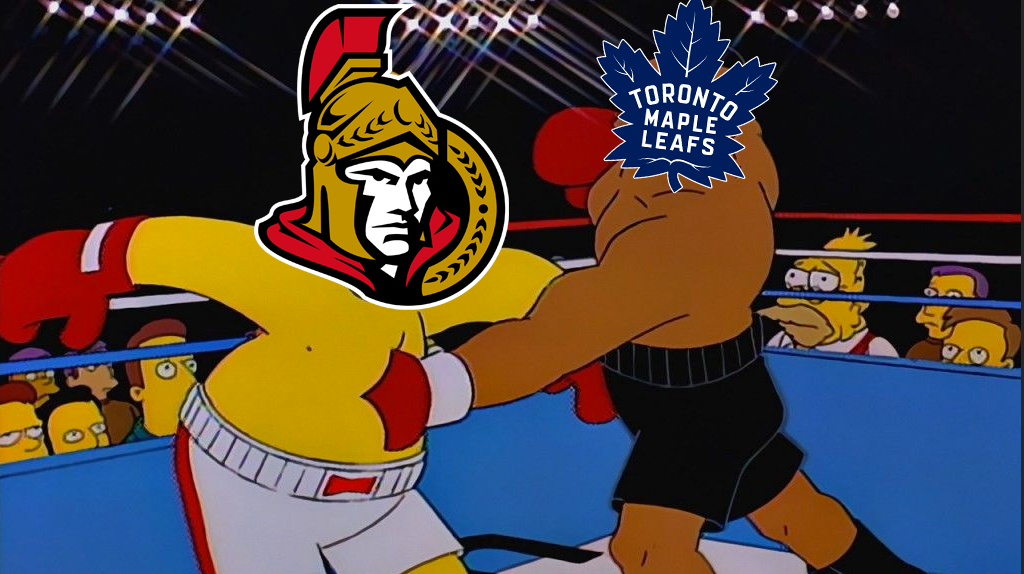 By Cam Lewis
1 year ago
One of the best things about the NHL’s realignment for the 2021 season is the fact the Leafs will get to face their baby siblings from Ottawa nine times. That should be nine wins.
The key word here is should.
Heading into the season, Ottawa is pretty much unanimously projected to finish at the bottom of the All-Canadian Division. But, to be fair to them, the Sens boast a lot of exciting young talent and that could make them more of a pain in the ass than they were last year.

25-34-12 (62 points), 7th in Atlantic Division
Goals For: 191 (24th), Goals Against: 243 (30th)
4-7-1 vs Canadian opponents
1-1-0 vs CGY, 1-0-0 vs EDM, 1-1-0 vs MTL, 0-2-1 vs TOR, 1-1-0 vs VAN, 0-2-0 vs WPG
The 2019-20 season was another tanking year in Ottawa.
Since reaching the Eastern Conference Final in 2017, the Sens have completely blown up their roster and have bottomed out in three consecutive seasons. Everyone from that playoff run — Erik Karlsson, Mark Stone, Mike Hoffman, Kyle Turris, etc — is now gone. The final nail in the coffin for the 2017 Sens came in 2020 when J.G. Pageau was dealt to the Islanders at the trade deadline and Craig Anderson was let go as a free agent.
In pursuit of Alexis Lafreniere, the Sens finished with a 25-34-12 record, good for second-last in the league. They were nowhere near able to out-tank the Detroit Red Wings, but that didn’t matter anyway because “Team E” won the draft lottery. Ottawa ended up with the No. 3 and No. 5 overall picks, one of which came by way of the San Jose Sharks from the Karlsson trade.
With those two picks, Ottawa added highly-skilled German forward Tim Stutzle and the smooth-skating American defenceman Jake Sanderson. They join a young core consisting of Brady Tkachuk, Thomas Chabot, and Erik Brannstrom who the Sens hope can return their team to relevance .

Notable Additions: Tim Stutzle, Matt Murray, Evgenii Dadonov, Derek Stepan, Austin Watson, Braydon Coburn, Alex Galchenyuk, Erik Gudbranson.
Notable Subtractions: Anthony Duclair, Craig Anderson, Anders Nilsson, Bobby Ryan, Ron Hainsey, Mark Borowiecki, Mikkel Boedker.
The Sens made a lot of moves this off-season. Are they any better? That’s sort of hard to say.
Stutzle, last year’s No. 3 overall pick, is expected to join the team this season, which will be a nice addition to Ottawa’s top-six. Another bonus with Stutzle is that he’s coming off a nice performance at the World Juniors, so he won’t be as rusty as a bunch of his teammates who haven’t played a game since mid-March.
Elsewhere, the Sens acquired former Stanley Cup champion Matt Murray to help solve their goaltending woes, they signed forward Evgenii Dadonov to add skill to their top-six, and they acquired a handful of veterans like Derek Stepan, Braydon Coburn, and Erik Gudbranson to help insulate their young talent.
At a glance, it looks like the Sens are better now than they were last year. But we also have to consider who they lost.
The team’s two top goal-scorers from 2019-20, Anthony Duclair and Pageau, are no longer with the team, so the additions of Dadonov and Stepan to the top-six are pretty much a a wash. Same goes with the blueline, where Coburn and Gudbranson are essentially just being swapped in for Ron Hainsey and Mark Borowiecki.
The key for Ottawa taking a step forward and being a pesky young team rather than a punching bag will be internal progression from their young players. If Tkachuk and Chabot can continue to improve, rookies like Stutzle, Brannstrom, and Josh Norris hit the ground running, and Murray can have a rebound season in net, the Sens could be a pretty decent team.
That, of course, is a lot of ifs and development in the NHL is never that simple. The Sens aren’t going to be an automatic victory each night by any stretch, because no team in this league really is, but the Leafs should be aiming to go 9-0 against this team.
Uncategorized
Recent articles from Cam Lewis