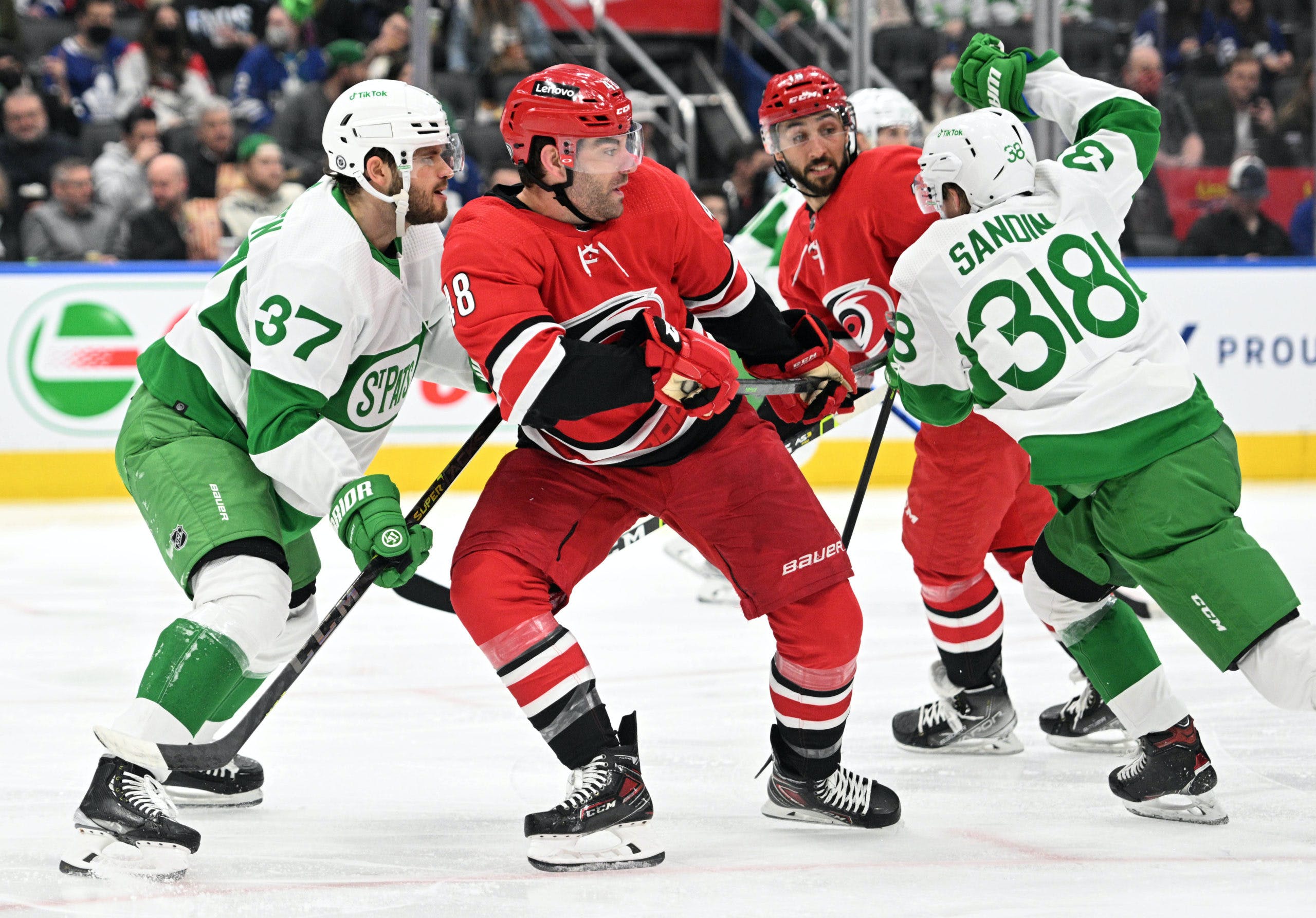 By Jon Steitzer
5 months ago
It doesn’t seem like we are that far removed from Travis Dermott’s post entry level contract and his somewhat inflated 2-year, $1.5M AAV contract. That was a pretty solid bridge deal and one that certainly worked for the Leafs as Dermott failed to take that next step and left them with a moveable dollar amount and a figure that wasn’t hurting the team when he was there. The Dermott deal is just one of the many comparisons that should have us pumping our brakes on anything being out of hand for @Rasmus Sandin and @Timothy Liljegren now that they are up for renewal, but nothing is ever easy with the Leafs, and there is still plenty to consider here.
While we’re being generally positive about these contracts, let’s look at Evolving Hockey’s projected contracts for Sandin and Liljegren:
Sandin projects as receiving a 2-year deal at $1.6M AAV and Liljegren would receive 2 years at $1.25M AAV. Both are a lot better than I’d expect to see and remarkably team friendly. Now that’s just the start of it, and it’s probably worth exploring the entire range of their contracts here.
Sandin’s range goes from $1.016M (on a 1yr deal) to $3.69M (on an 8yr deal) with an average contract of 2.9 years and AAV of $2.025M. That certainly reflects the dramatic shift between going long-term with an RFA vs. a bridge deal.
Liljegren very much mirrors Sandin’s range, but on a micro-level. His range is $1.094 (1-year deal) to $3.142 (8 years) with an average of $1.847M AAV and 2.8 years. The average AAVs for both Liljegren and Sandin seem to be much more likely than the mode selections.
The thing with the Evolving Hockey methodology is it’s based on a silly little thing called evidence, and evidence based decision making hasn’t really caught on in the NHL. Both Sandin and Liljegren are young former 1st round picks, and that last part has a funny way of driving up prices. That’s where comparisons need to factor in a bit.
Here are a few pulled off of PuckPedia that make sense to look at based on RFA contracts given to 1st or 2nd round draft picks playing around 16-17 minutes a night at the time of their deal.
@Henri Jokikaru received a $2.5M three-year bridge deal after averaging 18 minutes a night in the previous year.
@Jake Bean was just averaging 14 minutes a night when he received his 3-year $2.33M AAV deal. Although it’s worth noting this deal came with his second team.
@Juuso Valimaki received a 2-year deal at $1.55M AAV after playing around 15 and a half minutes a night.
@Dante Fabbro was already playing 19 minutes a night when he received his 2-year deal with a $2.4M AAV.
Other examples like @Ryan Lindgren’s $3M AAV contract were based on a defenseman already playing 20 minutes a night, and @Philippe Myers’ soon-to-be-bought-out contract aligns minutes wise with what Sandin and Liljegren are playing and he had some hype about him as a prospect, but he was undrafted. That might make his $2.55M AAV even more suspect.
The main takeaway is that even if the Leafs are having to pay for some potential here, it shouldn’t cost them in a bridge deal.
That brings us back to offer sheets and their potential impact.
Looking at what the high end of the scale is for Liljegren and Sandin, and you are looking at what would be high, but still somewhat based in reality offers of $3.142M AAV for Liljegren and $3.69M AAV for Sandin. I’ll assume both would be based on 5-year deals. Again, contract projection calculations aren’t going to account for GMs paying a bit more to screw over their opposition, so a touch up to $4M to max out the offer at the 2nd round draft pick compensation level would be most likely.
Perhaps the lesson here is that neither contract is too obscene that it shouldn’t be matched by the Leafs, and Toronto being forced to go longer term with good defensemen isn’t a terrible thing. It just messes with their short term plans, and messing with Toronto (and seemingly Kyle Dubas in particular) is something that NHL GMs haven’t been shy about doing.
Offer sheets really just take the idea of trading Kerfoot and Holl from something you consider doing to something that has become a necessity to do and couple those with moving Mrazek, it’s not impossible for the Leafs to still be competitive in the goaltender replacement market as well. Basically, the past instances in which I’ve discussed the possibility of offer sheets on these defensemen were overblown. Matching wouldn’t be the end of the world.
So stepping away from that possibility leaves us with the Leafs very likely committing around $4M between the pair of defensemen for the next couple of years. There might be a mild inflator to expedite the process and avoid external complications, but still, if that number is $5M, the Leafs can comfortably absorb that.
The only other challenge presented by two to three year bridge deals is that they would expire at a time when Matthews, Marner, Nylander, and Tavares are all up for their contracts. Though you could also look at that as more flexibility at a time when they need it most and one potentially aided by more cap space.
More from TheLeafsNation.com