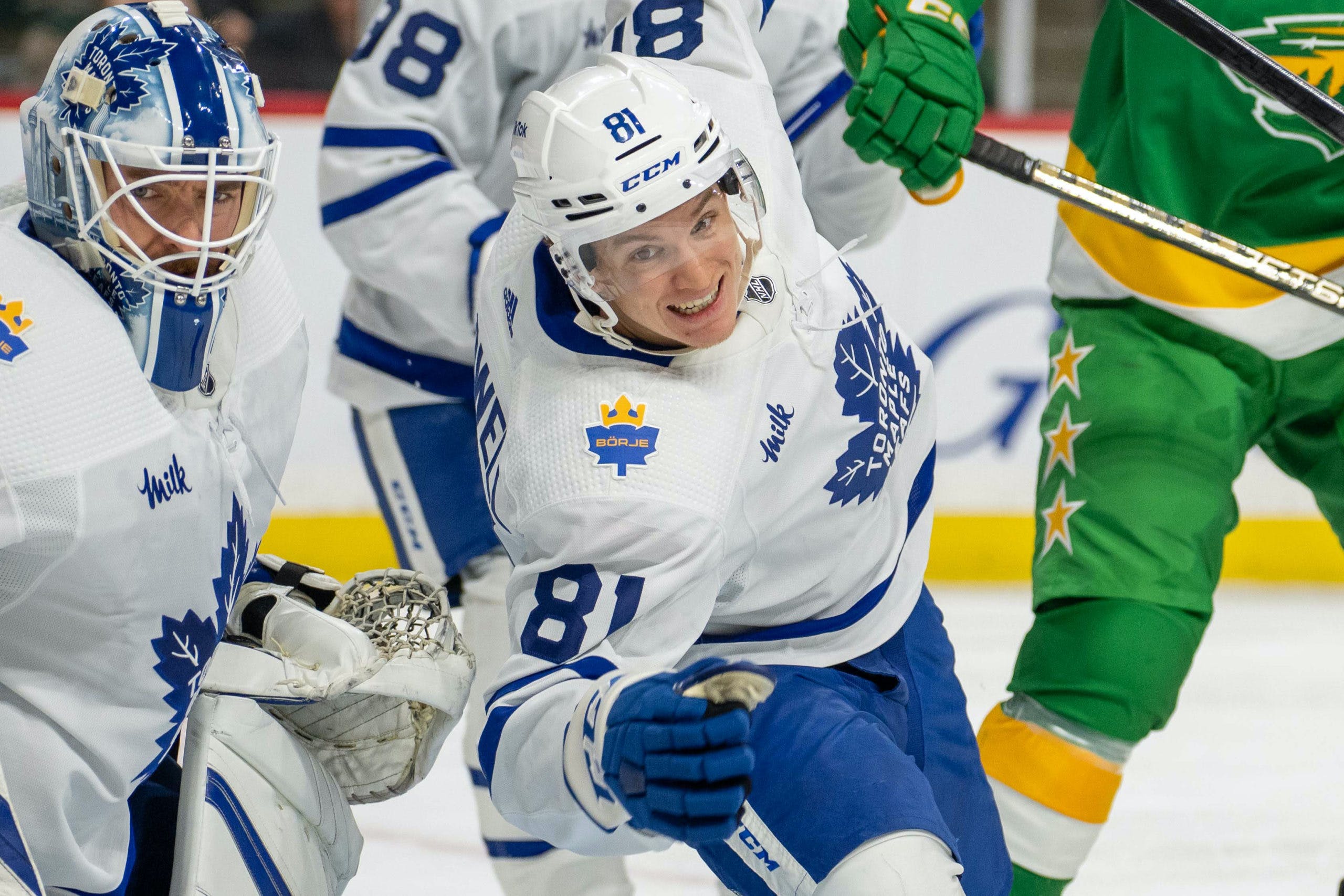 By Steven Ellis
2 months ago
Talk about a “welcome to the NHL” moment.
November 26. Toronto vs. Pittsburgh. It’s Mac Hollowell’s third NHL game, and he’s lined up on the third pairing with Victor Mete. In comes Evgeni Malkin, one of the best forwards of his generation, and Hollowell has to stop him. Malkin, like he’s done to so many others, made a quick move that made Hollowell look like a human statue, allowing No. 71 to get past and in a scoring position. Fortunately, Mete was back there to prevent a goal, but that’s definitely a moment Hollowell won’t forget.
“Just one of those plays, 1-on-1. He got me that time, hopefully, next time I’ll get him,” Hollowell said with a smile.
It’s been an eventful week for Hollowell, who made his NHL debut last week against New Jersey. He’s played in four games so far, winning all of them as the Leafs continue to navigate a blueline that’s missing Morgan Rielly, Jake Muzzin and TJ Brodie. Hollowell, 24, has adjusted well, earning love from his teammates early on.
“The big Mac, he’s the man. He’s solid back there. I told him after the game he is undefeated in the NHL so far,” Matthews said after Toronto’s win over Detroit.
Hollowell was far from a sure bet to ever play in the NHL. Hollowell was drafted just a few months before his 20th birthday and had to play his way up from the ECHL to earn an opportunity. Then there’s his 5-foot-9 frame, which is relatively undersized for a defenseman in the NHL today. He got passed over by numerous defensive prospects since joining Toronto’s system until Morgan Rielly’s long-term injury finally opened the door for Hollowell recently.
But a unique opportunity to live with Auston Matthews, William Nylander, Joe Thornton and Rasmus Sandin as part of a quarantine house in 2020 and 2021 really helped Hollowell align with the right people. Thornton, in particular, had a close bond with Thornton despite a near 20-year age gap, creating a special friendship that allowed Hollowell to learn from one of the NHL’s most respected NHLers.
Hollowell said Jumbo Joe has kept a close eye on Hollowell’s play this season. Thornton isn’t signed to an NHL deal, and likely won’t play in the big leagues again, but he’s still keeping a close eye on his old buddies.
“He kind of forces out of your shell a little bit,” Hollowell said. “He messaged me after my first point, just told me to keep things going here.”
And then there’s Matthews, who, at the time of living with Hollowell, was starting to really show his true star potential. So it’s fitting that Hollowell’s first NHL point was an assist on Matthews’ 11th goal of the season on Monday, with Hollowell getting the puck out of his zone to create the scoring chance.
“He’s a top guy on this team, a top guy in the league,” Hollowell said. “He’s just always kept it real cool with me. He’s never been too big for me and he’s always been a great guy.”
That type of veteran leadership can mean a lot for a young player trying to claw their way into an NHL lineup. And it took longer than he likely hoped, but Hollowell is here now. Living with those teammates is something he valued, even if they were all at different stages of their career. But Hollowell seems have gelled in well with the Leafs, based on just what we’ve seen early in games and in practices. For someone coming in for spot duty, that’s a nice advantage to have.
Hollowell’s NHL future isn’t really clear. Connor Timmins is in the system now and could be slotted in in the near future. Hollowell is an inexpensive depth option that’s done an excellent job of filling a need, but doesn’t have the size to play a shutdown role. They have enough defensemen that can move the puck, so it’ll be interesting to see if he’s sent back to the Marlies in the near future. It might fully be out of his control thanks to Toronto’s defensive depth, which has allowed them to stay afloat despite injuries to three-quarters of the top four.
That’s a topic for another day. It’s good that Hollowell has some solid people in his corner trying to help him succeed. It also helps that GM Sheldon Keefe drafted him to the OHL when he used to run the Soo Greyhounds. That’s an incredible support system to lean on, and having good friends can go along way in the NHL.
Wednesday will be Hollowell’s first real opportunity to play in front of friends and family. He grew up a Leafs fan, played down the road at Coca-Coliseum for most of his pro career, and he’s playing well. It’ll be a special night on Wednesday, and you can bet his good buddy Joe will be keeping a close eye.
Editorials
Recent articles from Steven Ellis