Could the Leafs be eying Rickard Rakell? 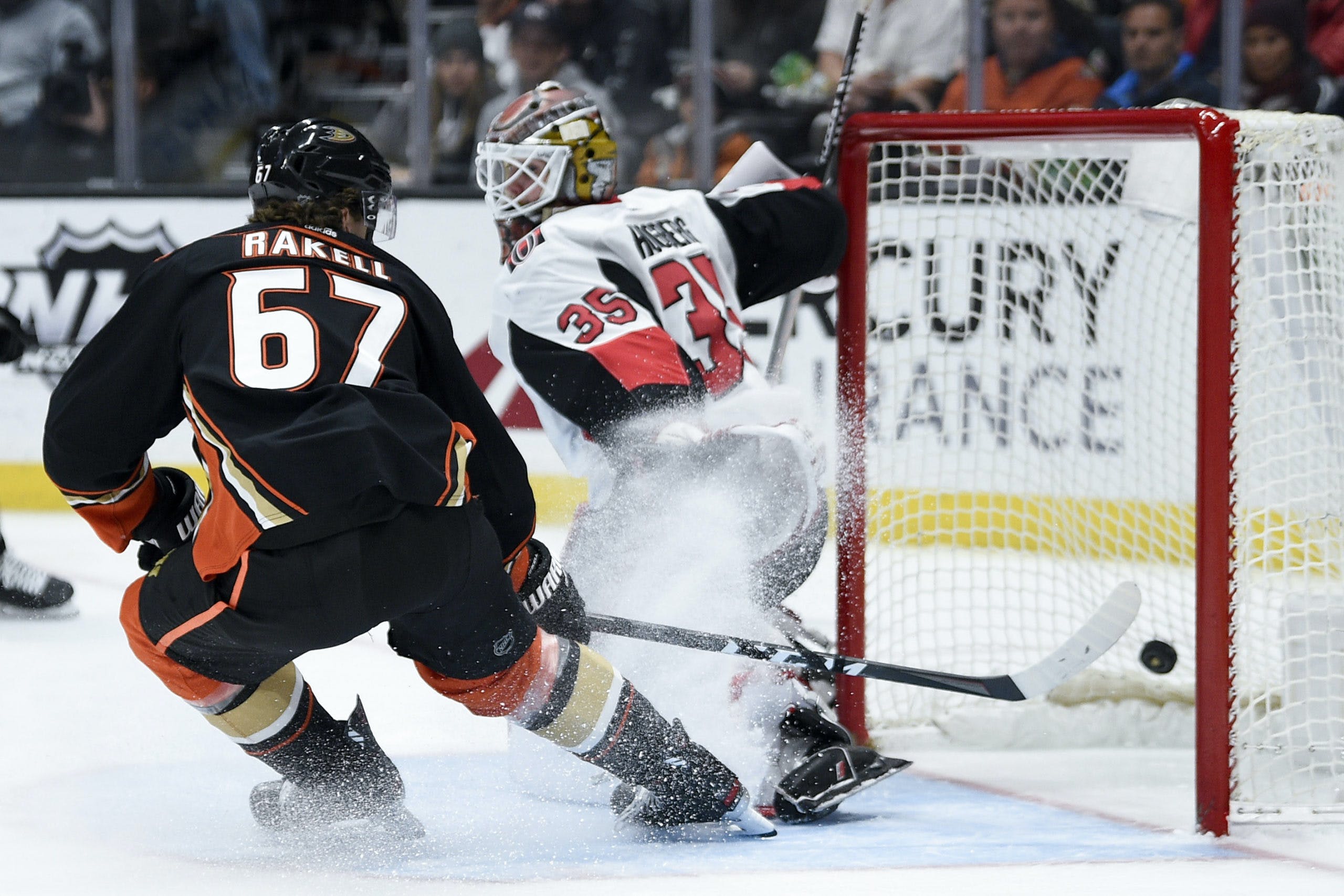 By Brian Reid
1 year ago
While much has gone right for the Toronto Maple Leafs early on this season, a quick rash of injuries coupled with depth forwards failing to meet the lofty expectations of “just chip in here and there, we literally have Auston Matthews” has left the team, at times, looking out of kilter. And despite the trade deadline being over two months away, the Leafs front office supposedly is already looking to add.
On his 31 Thoughts Podcast, Elliotte Friedman mentioned that he believes that the Leafs have a particular forward in mind, but he has not been able to confirm, a sentiment he doubled down on during an appearance on Tim & Sid. Friedman specifically mentions it would be a winger of high enough caliber to play with either Matthews and Marner or Tavares and Nylander, the latter pair having been affected the most by the early season shuffling.
In typical fashion, fans of the Leafs have begun scouring the roster pages of teams expected to be outside the playoffs, trying to determine who the mystery winger could be. The most common name is Los Angeles Kings winger Alex Iafallo, and while it is not hard to see why (established trade history with the Kings, expiring contract, the Kings have cap space available to retain salary and are also horrendously bad) the first name to come to my mind was a different Pacific Division winger playing in SoCal on a middling team.
Enter Rickard Rakell.

Once a perennial contender in the West, the Anaheim Ducks find themselves in a period of decline, having not made the playoffs in either of the last two seasons and being a victim of a first round sweep the last time they did three years ago. Despite hanging around the middle of a weak West Division early on, they currently sport a -9 goal differential (2nd worst in the division) and their two point cushion on the fifth place Arizona Coyotes is due to having played three extra games (each team trailing Anaheim has games in hand on them) and two of those games resulting in an overtime loss. While it cannot be assured that the Ducks will falter, there are warning signs that their time in a playoff position may be fleeting, which could make the 27-year-old winger available should they look to sell.
Rakell is off to a slow start this season, having just one goal through Anaheim’s first fifteen games, but that is largely do a career low shooting percentage which, at the time of writing, sits at an even 2%, compared to a career average of 11.5%. Rakell scored a career high 34 goals in 2017/2018, and while that too may have been unsustainable, it does show he is more than capable of contributing at a top level and could provide a boost to Toronto’s second line and powerplay unit.
While many look to Kyle Dubas’ trade history with the Los Angeles Kings to strengthen their belief of Alex Iafallo being the Toronto’s trade target, there’s a little quirk of both deadline deals that Dubas has struck with the Kings that provides a look into things the general manager seems to value when striking a trade. Despite the conventional logic being that contending teams spend their assets to bring on expiring contracts that they believe can put them over the top for a one-year playoff run, both trades with the Kings (Jake Muzzin in 2019 and Jack Campbell in 2020) involved a player with at least one extra year coming to the Leafs. This is a qualification that Rickard Rakell would meet, with his contract running through the end of the 2021/2022 season carrying a $3,789,444 cap hit.

This is where things get tricky. Given their cap situation, any trade involving the Toronto Maple Leafs would likely require either significant money going the other way or their trade partner retaining a chunk of salary. And while the Los Angeles Kings would be able to do this with no issues, the Anaheim Ducks are actually in a comparable cap situation to the Leafs, making a swap between the two teams difficult. Given his aforementioned cap hit, any trade for Rakell would likely have to involve Alex Kerfoot ($3,500,000) going the other way as part of the deal. While this may seem to be a purely “to make the money work” move, with the contracts of Ryan Getzlaf and David Backes set to expire at the end of the season, a center signed to a bit of term at a reasonable cap hit may be appealing to Anaheim. While that obviously would not be an appealing move straight up for Anaheim, the Leafs have a decent enough prospect pool, as well as their first and second round picks in the upcoming draft to work with. I typically don’t like posting hypothetical trade proposals, but for the sake of having one up, let’s start with a basis of Alex Kerfoot, Kalle Loponen, and the 2021 2nd with conditions attached that can increase it to a 1st round pick based on playoff success.

Where would Rakell slot in?

Second line right wing flanked by John Tavares and William Nylander seems like the logical fit. While the Matthews and Marner duo has been stellar, flowing seamlessly from Joe Thornton to Zach Hyman with no real steps backwards, the second line has struggled to find consistency, having rotated from Jimmy Vesey to Ilya Mikheyev to Wayne Simmons and now back to Mikheyev. While Simmonds found success there, giving the line a third scoring threat could be beneficial in his absence, while dropping Mikheyev to a third line role which is more suitable to his skill set. This leaves Jimmy Vesey free to go back to Harvard to play hacky sack with some Alpha Gamma Betta lax bros or something (or join the Taxi Squad, do any of us really care anymore?)
While there are probably a few players out there who require less in terms of assets and cap gymnastics to bring in, the appeal of adding a year and a half of former 30 goal scorer at a cap hit below $4 million is intriguing. Though Rakell’s numbers may not reach the highs they did in 2018 again, the talent clearly is there, and pairing him with linemates the caliber of John Tavares and William Nylander (or even Auston Matthews and Mitch Marner) could pay dividends.
Also, it would be nice to partially undo one of the most lopsided draft day trades the Leafs ever made.

Yeah, have fun with that Pittsburgh.
Uncategorized
Recent articles from Brian Reid