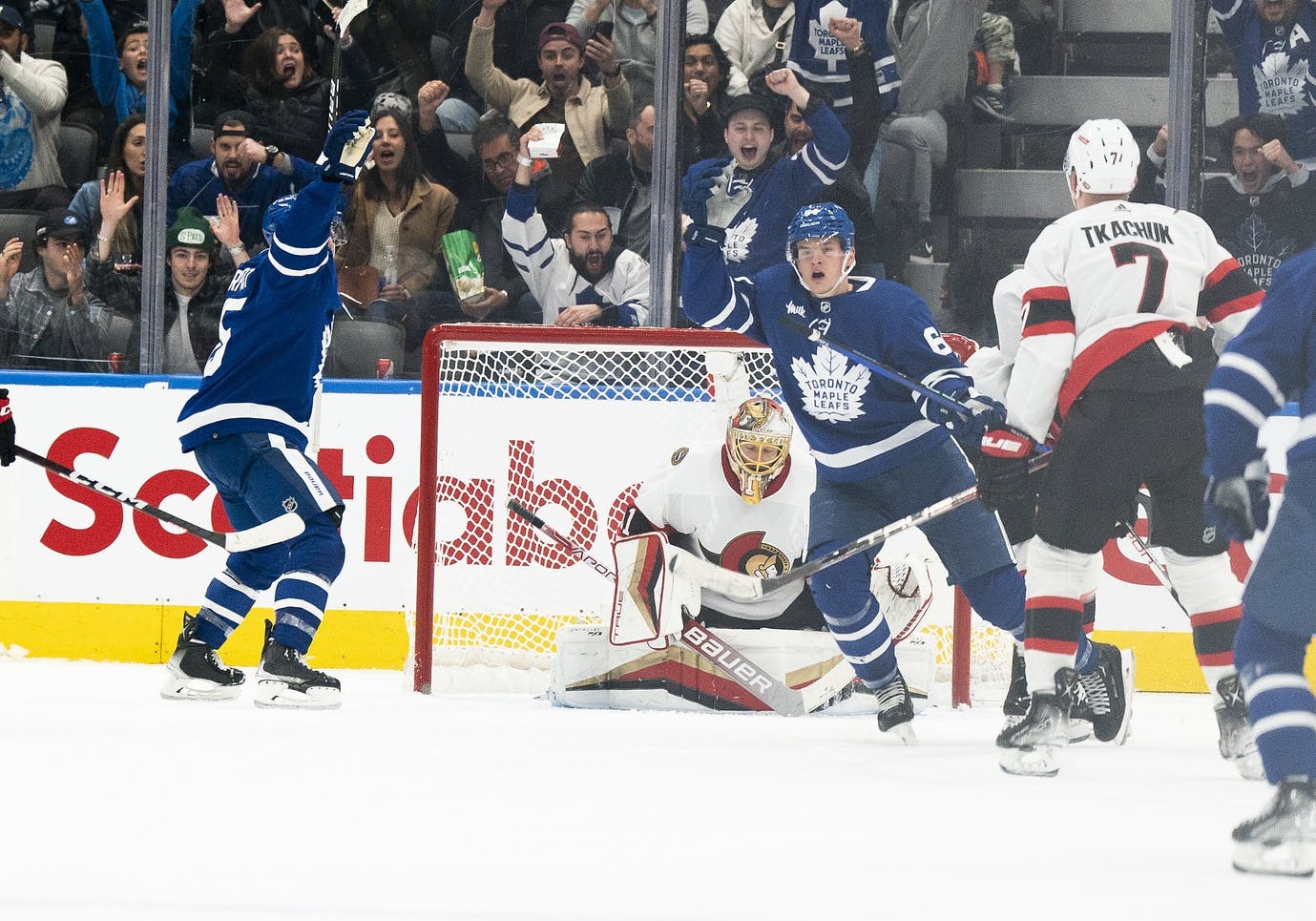 By Steven Ellis
3 months ago
When asked to describe what David Kampf brings to the Toronto’s lineup on Saturday, Maple Leafs coach Sheldon Keefe was quick to say “stability” and “consistency.”
That’s all you can ask for from a fourth-line forward like Kampf, who scored his first goal of the 2022-23 season in a 3-2 win over the Ottawa Senators. Kampf wasn’t brought in to produce, but with 11 goals and 26 points last year, he has managed to play the best hockey of his career while bringing energy to Toronto’s bottom six.
And it’s something that Keefe appreciates.
“He’s reliable and consistent,” Keefe said. “He seems to have a knack… I don’t know if he’s scored an unimportant goal for us. He just finds ways to score big goals in key times. So that’s a nice characteristic to have.”
In Kamp’s case, it was a late second-period marker – a re-direction off of a Jake Muzzin feed – that capitalized on a flurry of momentum, giving Toronto something to cheer about after trailing since the ninth minute of the contest.
Kampf has been a member of Toronto’s sparkplug line which includes Zach Aston-Reese and Nicolas Aube-Kubel. It’s not a line that’s going to instill fear in opponents on a nightly basis, but they’re darn hard to play against. So any night like the trio had on Saturday is a big confidence booster, especially on more quiet nights for the team’s top line.
When the Leafs signed Kampf ahead of the 2021-22 season, he was coming off of a one-goal, 12-point season. He had never hit double digits in goals and had a career-high of 19. So not only did he top those numbers last year, but he has started off as a noticeably important member of Toronto’s lineup each game so far.
Simplicity is the name of the game for Kampf, and that’s what makes him best.
“Scoring is not what he does, it’s not his thing,” Keefe said. “Pucks in the offensive zone, there’s an opportunity there, get your stick down there ready to redirect it. That’s a simple play that we practice quite frequently. And in that moment in the game, that’s what it called for and he was there.”
Kampf’s line is Toronto’s shutdown line, and with Aston-Reese and Aube-Kubel not being standout puck movers by any stretch, Kampf does need to carry the load more as a transporter down the ice. It stood out a bit more during the pre-season and has carried on early in the campaign. Kampf spent some key time with Ilya Mikheyev and Pierre Engvall, where Kampf could sit back more and being more a complementary role. It’s still early, but his play early suggests he’ll be relied on to get pucks out of the zone a bit more this season, and it’s something he has already looked good at early.
So actually getting a goal on the board – and in this case, quite an important one – is a nice added bonus when you realized his group was paired up against Drake Batherson, Brady Tkachuk and Tim Stutzle for most of the night and handled them quite well. In fact, Kampf scored with Ottawa’s top line on the ice, not the other way around.
Kampf’s not going to put up many points this season, but it’s hard not to cheer for a guy when he does, especially against a rival. It’s goals like that that can be big confidence boosters, and, heck, who knows? Maybe another career year is on the horizon.
Editorials
Recent articles from Steven Ellis