Do early season games matter for the Maple Leafs? 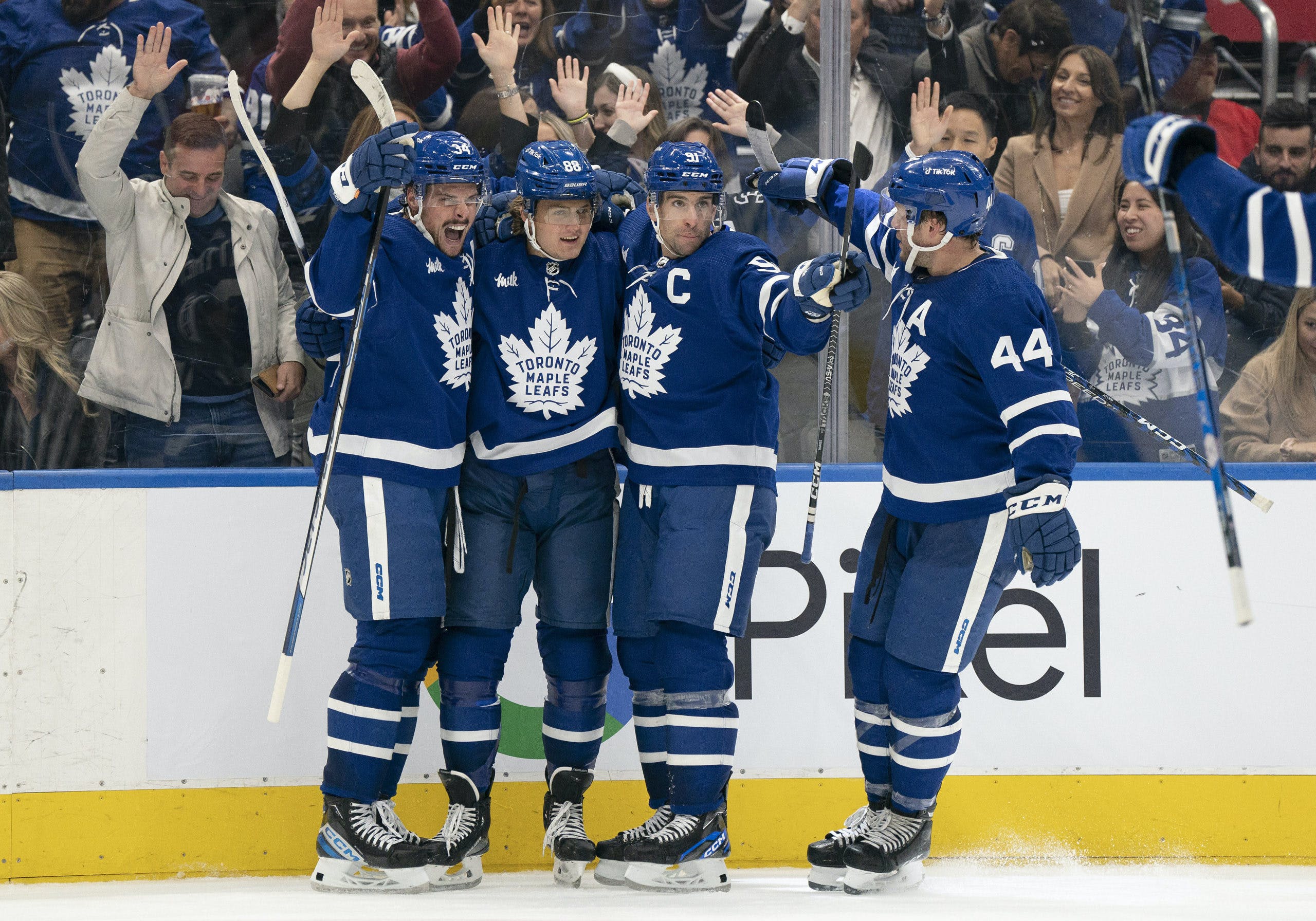 By Jaden Ho
3 months ago
It’s the beginning of a new hockey season, meaning it’s the best possible time for overreacting. Is your team undefeated? They’re a cup contender. Winless? Better hunker down for a long season of watching Connor Bedard highlights and playing draft lottery simulators. Of course, we all know it’s ridiculous to draw conclusions about anything based on the beginning of the season. This is especially true for the Leafs, as their season will be judged on playoff performance. But that doesn’t necessarily mean early games are entirely meaningless. Getting off to a good start is essential, setting the tone for a long 82-game season. But just how meaningful are early season games? How difficult is it to overcome a slow start? To hold on to standings position after a hot start? Let’s take a look at some teams in recently who show us some answers.
We’ll start by going six years back, to the 2016-17 season, taking a look at the three most recent seasons that were on a “normal schedule” unaffected by the pandemic. Taking a look at the standings on December 1st, the Montreal Canadiens sat atop the Eastern conference, while the Chicago Blackhawks had the top spot in the West. By the end of the season, the Canadiens had fallen to fourth in the conference, but still won the Atlantic division, and the Blackhawks retained their spot in first in the West, seeming to indicate that the early season games did matter for those at the top of the league.
More interesting than both of these teams, however, is Washington, who were sixth in the east on December 1, but ended the season running away with the Presidents trophy. A slow start didn’t seem to bog down the Capitals at all, as they finished 9 points ahead of Chicago in the race for the best regular season.
In the middle of the pack, there was very little turnover of playoff teams after December 1, with Toronto and Calgary being the only two non playoff teams in December to make the playoffs come April, knocking out Tampa Bay and Los Angeles. The 16-17 season was, from top to bottom, a shining example of why the first couple months of the season are important.
to the 2017-18 season. As of December 1st of that year, the Tampa Bay Lightning were top dogs in the Eastern Conference, while the Winnipeg Jets took the number one spot in the West. Fast forward to the end of the season, and the Lightning remained atop the East, with Winnipeg only falling one spot to second in the West. On the other side of the coin, Buffalo and Arizona were at the bottom of their respective conferences (a testament to how long those two teams have been bad). They both would stay mired in the basements of their conferences for the rest of the season. So at the very extremes, 2017-18 seems to indicate that October and November are very important.
Things look different in the middle, however. A good example is the Washington Capitals. On December 1st, they sat in 6th in the Metropolitan Division, six points back of the Division-leading Columbus Blue Jackets. By the end of the season, the Caps had made their way to the top of the division, eight points ahead of the Blue Jackets. There were six teams who were not in a playoff spot as of December 1st who found their way into the playoffs by season’s end: Washington, Philadelphia, Boston, Colorado, Anaheim, and Minnesota. So if your team has been middling and is on the outside looking in, fear not, 17-18 says theres hope.
We’ll move on to the 18-19 season, Tampa Bay once again led the East as of December 1st, with Nashville leading the west. By the end of the season, Tampa Bay remained atop the east with a fantastic 62 win season, leading to a long playoff run (checks notes) of a first round sweep. Nashville finished second in the west. Los Angeles and New Jersey were the bottom feeders in their conferences, and would remain there, with LA ending up last in the West, and New Jersey second from the bottom of the east. So once again, the best of the best and the worst of the worst seem to remain where they are from December onwards.
The middle is once again more interesting, a notable example being the Anaheim Ducks. As of December 1, they were just one point back of the Calgary Flames for first in the Pacific division, but fell all the way sixth by the spring, finishing the season 27 points behind Calgary in first. The Ducks were one of four teams that fell out of the playoffs from December onwards, along with Buffalo, Montreal, and Minnesota, meaning that three quarters of playoff teams in December were playoff teams all season.
So with three recent season in mind, how much stock should we put into the early season games? We can pretty reliably assume that teams who are at the very top or the very bottom of the league will maintain their spot at the beginning of December the rest of the way. The middle is a little bit more up in the air, but on average, only four teams will fall out of a playoff spot after the two month mark, meaning if your team can secure a spot by December, they’ve got a three in four chance of making the playoffs at the end of the year.
So maybe we aren’t overreacting so much at all, the early season matters, a hot start can spur on a surprising season, while a cold one can snowball into a disaster. While we all know that this season will be judged purely on what happens in the playoffs for the Maple Leafs, every game counts the same, and they had better play like it.
Editorials
Uncategorized
Recent articles from Jaden Ho