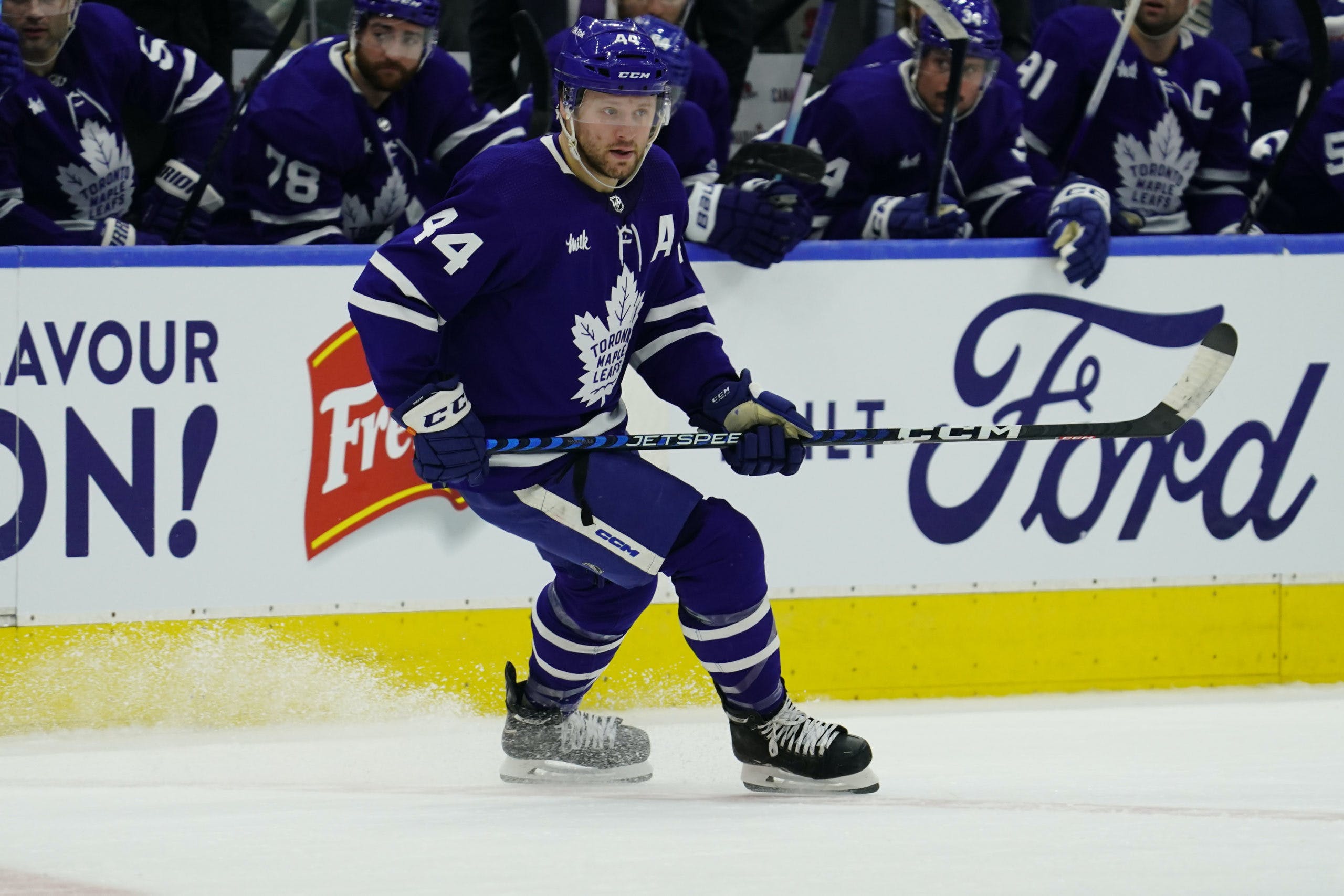 By Jon Steitzer
26 days ago
The Leafs playing one of their worst games of the year was certainly softened by Team Canada picking up gold in the World Juniors tournament. If you hadn’t switched over to primarily watching the gold medal game by the time the third period rolled around in the Leafs game, I don’t know what to tell you. You are certainly committed to pain.
And if you didn’t watch the entirety of the Leafs game, good news. Here are a few numbers that can fill in the blanks for you.

Normally a Corsi chart doesn’t sum up the night so perfectly but this is a pretty accurate tale of what happened. The Leafs came on very strong at the start of the game and had to deal with Martin Jones standing on his head. Coming out of the game against Edmonton, it looks like Jones is riding a bit of a heater and it continued against the Leafs. The first Seattle goal really took the wind out of the Leafs sails, and by the time the game was 3-1 the Leafs were fully checked out.

The gap in save percentage between Matt Murray and Martin Jones tells a lot of the story here. Martin Jones was playing one of his best games of the season while Matt Murray was playing one of his worst. Interestingly enough compared to Samsonov the other night who was undone by poor performance on High Danger chances, primarily on the power play, Matt Murray was bad across the board. His .750 HDSV% was better than what Samsonov had the other night, but his Mid Danger was just at .500 and his low danger was a dismissal .867 as well.
Reasonably you can hang a lot of last night on the goaltender, where that wasn’t true with Samsonov, at least not to this extent.
Murray’s performance, like Samsonov’s has been declining over his last five starts, but has been a bit more sporadic than Samsonov’s. He does have two strong outings and one near .900 outing in his 2-3-0 stretch, and while there is a desire to hit the panic button given what we’ve seen in goaltenders declining midseason in the previous two seasons the purpose of having two capable goaltenders is to see if one of them is comfortable to take the reins and pull themselves out of it. With two sets of back-to-back games coming up for the Leafs, the next two starts for each goaltender might decide who gets the bulk of the workload in the second half of the season.

I’m not sure if it is ever possible for an offensive defenseman to get a fair shake in Toronto. Larry Murphy was run out of town. The same was largely true of Bryan McCabe and Jake Gardiner. There were even far too many detractors of Tomas Kaberle, who might have been the best Leafs defenseman of my lifetime.
Anyways, with Rielly being on the ice for a back breaking goal and Jared McCann having a noticeable gap on Rielly as the first Leaf back he drew a lot of criticism again last night. No criticism of his partner. Some criticism of Murray, but Rielly took the brunt of it for being the first player back on what was a great stretch press from Jaden Schwartz. This was the back breaking goal so of course it draws extra criticism.
The clip shows Mark Giordano down belong the Kraken goal line on a somewhat confusing pinch as the Kraken gain control and the play quickly moves back towards the Leafs end. Rielly does react to shift in possession, but fails to catch McCann, and a well placed shot beats Murray. Maybe Rielly needs to be more aware that a Kraken player is behind him, but that is also something that should have been covered off by one of the Leaf forwards given how deep Giordano was pinched down. In closing, we are probably asking too much of a Rielly, and he the criticism of him for last night is based largely on this one goal while his numbers tell a different story.
There are many valid criticisms of Rielly’s play and the eye test supports a lot of them again last night, but his play wasn’t resulting in pucks going into the back of the net. At least not last night.
It may or may not be a coincidence that the Leafs goaltending came off the rails around the same time that Morgan Rielly returned to the Leafs lineup, but since Rielly’s return he’s had positive CF%, HDCF%, and xG% differentials. It’s just his GF% at 33.3% that is troubling and his .941 PDO likely means that it’s not going to stay this way forever.
There are frustrations that come with an offensive defenseman being the 1D, but the Leafs know what Morgan Rielly is at this point. He’s their longest serving player and they know he isn’t suddenly going to start breaking up two on ones or make the best coverage decisions in his own zone. The Leafs have accepted that and believe his puck control justifies his shortcomings.

It wasn’t a great night for the Leafs bottom six forward group and the balanced attack of the Kraken largely did them in. Matchups involving 3rd and 4th lines heavily favour the Kraken, and that the approach that makes a ton of sense for an expansion team to roll with. Aston-Reese, Kampf and Kerfoot were each out for 2 5v5 goals against, with Zach Aston-Reese and Engvall also being scored against on the penalty kill. The Leafs fourth line again had two players with sub 40% Corsi For, with the Hunt only having 42 CF% as well. Some minor adjustments and experimentation with this group seems to make sense, but as the Leafs look to enhance their lineup towards the trade deadline it seems far more likely that bringing in players that push the underperformers down in the lineup or out of the lineup is the plan.
Toronto plays again on Saturday against Detroit before flying to Philadelphia for a game on Sunday.
Editorials
Recent articles from Jon Steitzer