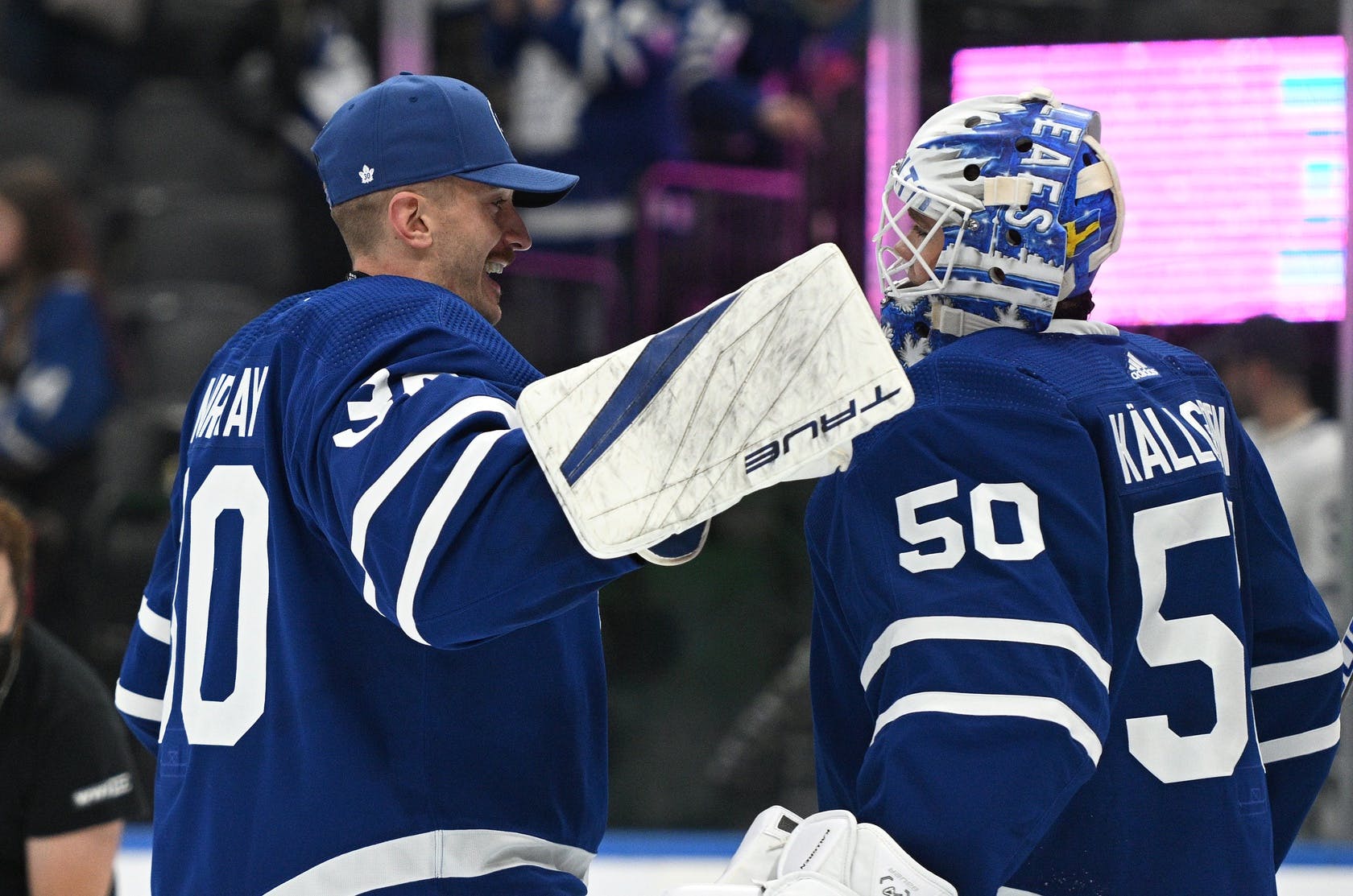 By Jon Steitzer
2 months ago
Thanks to a Sunday battle with a stomach bug I’ve decided to tackle this week’s Leaflets a day late. I’m sure you didn’t notice, but generally my collection of half thoughts goes up Monday morning instead of Tuesday. If there is one reader out there going “WHERE ARE MY LEAFLETS?” this update is for you.
That’s enough preamble, let’s get to the half thoughts.

If there is a time and place to overwork Matt Murray history has taught us that it is in the playoffs. And history has also taught us that keeping him healthy enough to get to the playoffs will be a challenge too, so despite his price tag and despite the fact that he in theory is the better goaltending option compared to Erik Kallgren, I’d hope the Leafs are cautious about easing him into their lineup.
We already know that Murray will be the starter for the Leafs tonight, and while Samsonov was at practice on Monday, his return hasn’t been announced either. That possibly means seeing more of Erik Kallgren than we like in the next couple of weeks, but with the Leafs on pretty much an every other night rotation, splitting the workload seems like a good idea for a goaltender that hasn’t hit the 30 game mark in the past two seasons (and in reality probably won’t hit it this year either.)
Murray will certainly want the two Pittsburgh games in the next 7, but other than that giving him one or two more seems like the max, despite whether Samsonov is ready or not. Buffalo seems like the no brainer, and if after the first Pittsburgh game and the Buffalo game the Leafs are feeling confident in Murray, the second New Jersey game might be a good option as well.

Getting the youngsters into the lineup

We spend a lot of time talking about how it is important the Leafs move on from players like Alex Kerfoot or Pierre Engvall in order to free up some cap space and/or contract space for the Leafs. One of the things that we don’t focus enough on is how they seem to be blocking a number of players who the Leafs should want to get a look at.
To some extent, I’m not sure if it’s been a blessing or a curse that the one area of the Leafs that has stayed healthy this year are their forwards as it has prevented the Leafs from giving serious opportunities to Nick Robertson, Pontus Holmberg, Alex Steeves, and others early in the year to see what they can provide for the Leafs, and as quick as Leafs fans are to turn against players like Kerfoot or Engvall because their games aren’t exciting doesn’t mean that they aren’t serviceable players. (Though admittedly the Leafs seem to be falling into the age old trap of overcommitting to penalty killers.)
As much as I hate the idea of poo-pooing depth but Kerfoot and Engvall at $5.75M have a lot less appeal than $5M center and Adam Gaudette.
Of course, getting to where the Leafs don’t have Kerfoot and Engvall but have added a $5M player (or $10M that was 50% salary retained) is the tricky part.

In praise of the Leafs defense (with one exception)

One of the interesting stats to consider while Muzzin is on the LTIR, Brodie is out for the next couple of weeks, and the Leafs have been without Liljegren and Benn for the majority of the season is that the Leafs are 8th in the league for best Corsi Against/60. That’s with a full season of Justin Holl.
Now, that’s 5v5, and doesn’t factor that the Leafs are decidedly more middle of the road when it comes to high danger chances, but it is encouraging to see that the blueline is getting by.
When it comes to defensemen struggling with CA/60 and HDCA/60, Justin Holl is where the struggles lie. Some of that is Keefe deploying Justin Holl beyond his means and a dialed back to third pairing responsibilities Justin Holl could still be useful.
However, it also seems that if Jordie Benn continues to perform adequately the easy choice will be to move up to the pressbox when TJ Brodie returns.
Editorials
Recent articles from Jon Steitzer