How Morgan Rielly has done against North Division competition 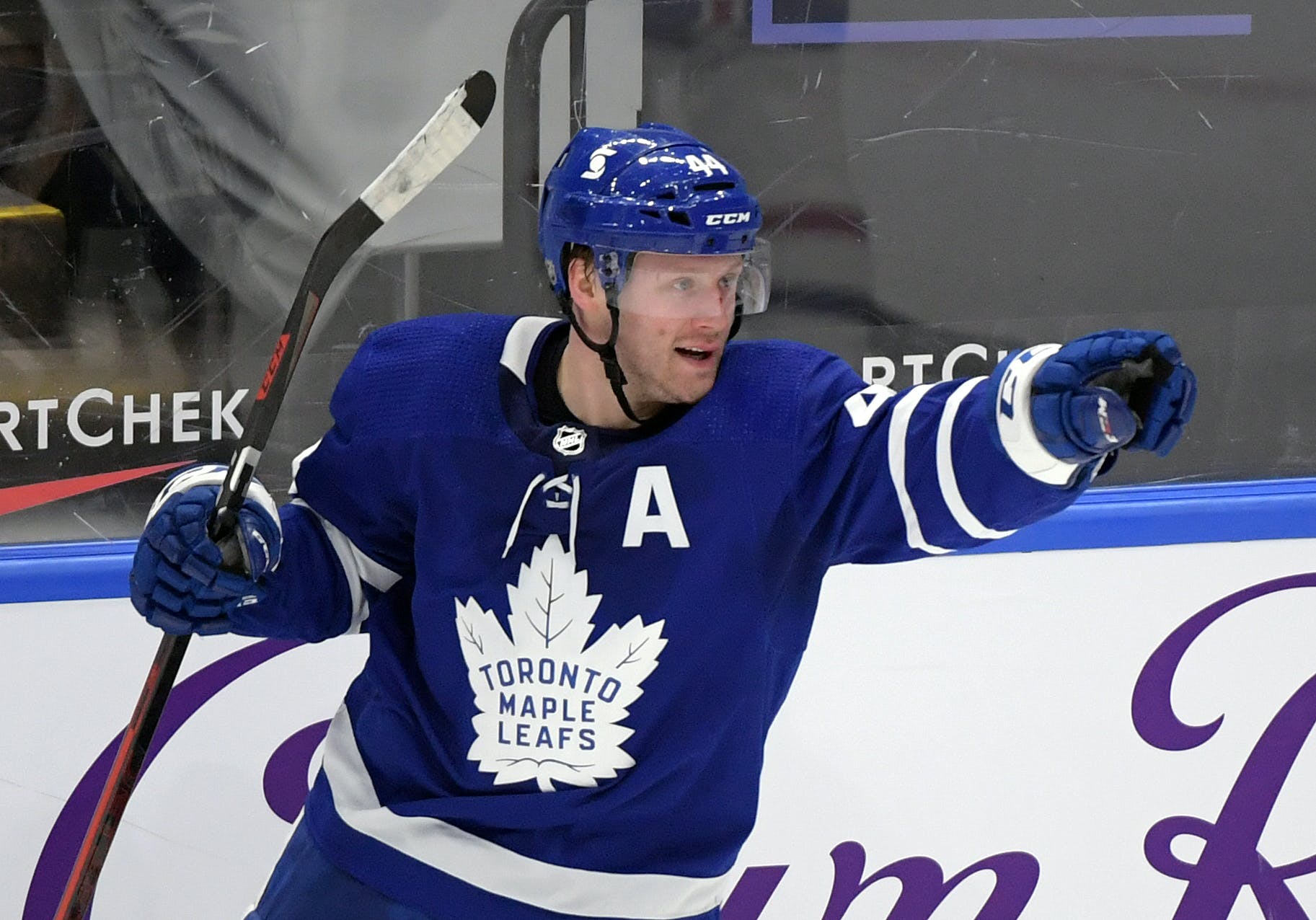 By Jon Steitzer
1 year ago
It was just over a month ago that I decided to explore what the Leafs have in Morgan Rielly. The reality then is the same as it is today, Rielly is a talented offensive defenseman, that will always let us wanting more from him in his own zone. I think everything was summed up pretty well there, and my ultimate that the Leafs need to move from him over the summer remains unchanged.
A lot of that was looking at Rielly heading into the trade deadline, and now we find ourselves in a different situation, and that’s looking at how much of a liability Rielly will be heading into the playoffs from a defensive perspective, and if his offence outweighs that issue. At no point am I going to attempt to make a case that Rielly doesn’t belong in the Leafs top six. No matter how you slice it, Rielly deserves to be in the lineup, but as line matching increases, does Rielly need to be deployed differently, and is T.J. Brodie the ideal defensive partner for him?

At this point the North Division playoff teams are pretty much set. Unless the wheels completely come off for Montreal and either Vancouver or Calgary pull off a hilarious miracle, the playoff teams will be Toronto, Edmonton, Winnipeg, and Montreal. It’s worth taking a look at how Rielly has fared against that competition, and here are his 10 ten most frequent forward opponents.
So from the looks of things, Rielly does pretty well against the Jets stars (and Andrew Copp), he’s frequently pinned down in his own end against the Oilers top lines, and while the above table doesn’t show too much of it, Rielly also struggles against the top two Montreal lines as well. Of the competition listed, the only players that the Leafs had bettter outcomes with Rielly on the ice instead of other pairings, was with Connor, Schiefele, and Copp, although it was just a modest improvement in the case of Connor.
Considering that Rielly is half of the top pairing, the fact that you are experiencing the puck consistently moving in the wrong direction when he’s on the ice is probably a huge red flag. While the time that Brodie has spent away from Rielly has been minimal this season, his numbers do show a modest improvement against this competition, and his outcomes are better when or closer to the Leafs numbers when he’s not on the ice.

While there is an increasing frustration to Rielly’s play on the powerplay, his offensive numbers are fairly consistent with where he’s been over the past four seasons, save for his career year when he had 20 goals and 72 points. Rielly is even where we should expect him to be on the powerplay.
When it comes to the offense it appears that Rielly has been producing his mainly against the non-playoff bound teams, although the sample size in these splits leave a lot of room for change over the remaining games, not unlike his defensive numbers as well. Still, having underwhelming numbers against Winnipeg and Edmonton here, in addition to having underwhelming numbers against Montreal and Edmonton from a defensive perspective probably raise some concerns over where Rielly should fit in during the playoffs.

Do Rielly and Brodie stay together for the playoffs?

We’ve already seen a failed revised pairing of Rielly and Holl that seemed to make both of them play worse, and I’m sure we can scrap that idea going forward. I would have been a champion of pairing Rielly with Bogosian, but his injury has made experimenting with that an impossibility. With that in mind, I now wonder if the Leafs might be better off trying Rielly with Ben Hutton, a defenseman who seems like he could compliment Rielly in a manner similar to how Rielly played with Ron Hainsey. The issue there is who now comes out in order to try that, and do the Leafs gain anything out of a potential Sandin-Brodie pairing, or a Dermott-Brodie pairing. My guess is there is some potential merit to Sandin-Brodie pairing that can be utilized as a base pairing, but there is the opportunity to include Rielly in more offensively critical situations instead.
While Rielly’s play can be an issue, the Leafs are better off if they are utilizing him to his fullest. That means putting him in situations where he can provide increased offensive pressure. The problem with doing that is it nullifies a lot of responsible play Brodie has in the offensive zone because he needs to play even more conservative than you want him to. A player like Bogosian or Hutton might give the Leafs the opportunity to have the best of both worlds from time to time.
In reality we’re probably not going to see Rielly-Brodie broken up at all, and Rielly over his career has been very much a what you see is what you are going to get from him player defensively. He’s not going to drastically improve because we want him to over the next couple of weeks. It will likely come down to deployment. It’s probably no secret the Leafs will begin line matching a lot more come playoff time, and Muzzin and Holl will see the top line regularly. The fact that Rielly and Brodie will be seeing the second line is already a plus, though not an absolute fix. The key might also be to put Rielly out with forward lines with players capable of covering his gaps. Players like Foligno and Hyman might give Rielly an opportunity to continue his riverboat gambler style of play, and not get called on it. That just probably needs to be communicated more than it has been this year.
Rielly is a good player and when defense is the name of your position and it’s not your strength it’s easy to throw some shade in Rielly’s direction. The fact that he’s still a solid offensive producer, but not at the pace he was under Babcock points to a bit of disconnect between the way Rielly plays and the way Keefe deploys him, given that Keefe doesn’t seem to have any issue with putting Rielly out there, perhaps the issue falls more with the coach than the player, since we’ve all known what Rielly is for some time. Seeing Muzzin play with Brodie, and Rielly with Holl for a game points to Keefe knowing a few other options should be explored, but at the end of the day, we’re likely going to see Rielly with Brodie because that’s what we’ve always seen, and there’s plenty of evidence that shows the Leafs can survive North Division matchups with it. There’s also something to be said for Rielly-Brodie being a solid option against the teams that haven’t faced them all year if Toronto advances that far in the playoffs. There’s always hope, although questionable defensive play is something the Leafs have a history of being exposed on in the post season.
Data sourced from Evolving Hockey, Hockey Reference, and Natural Stat Trick.
Uncategorized
Recent articles from Jon Steitzer