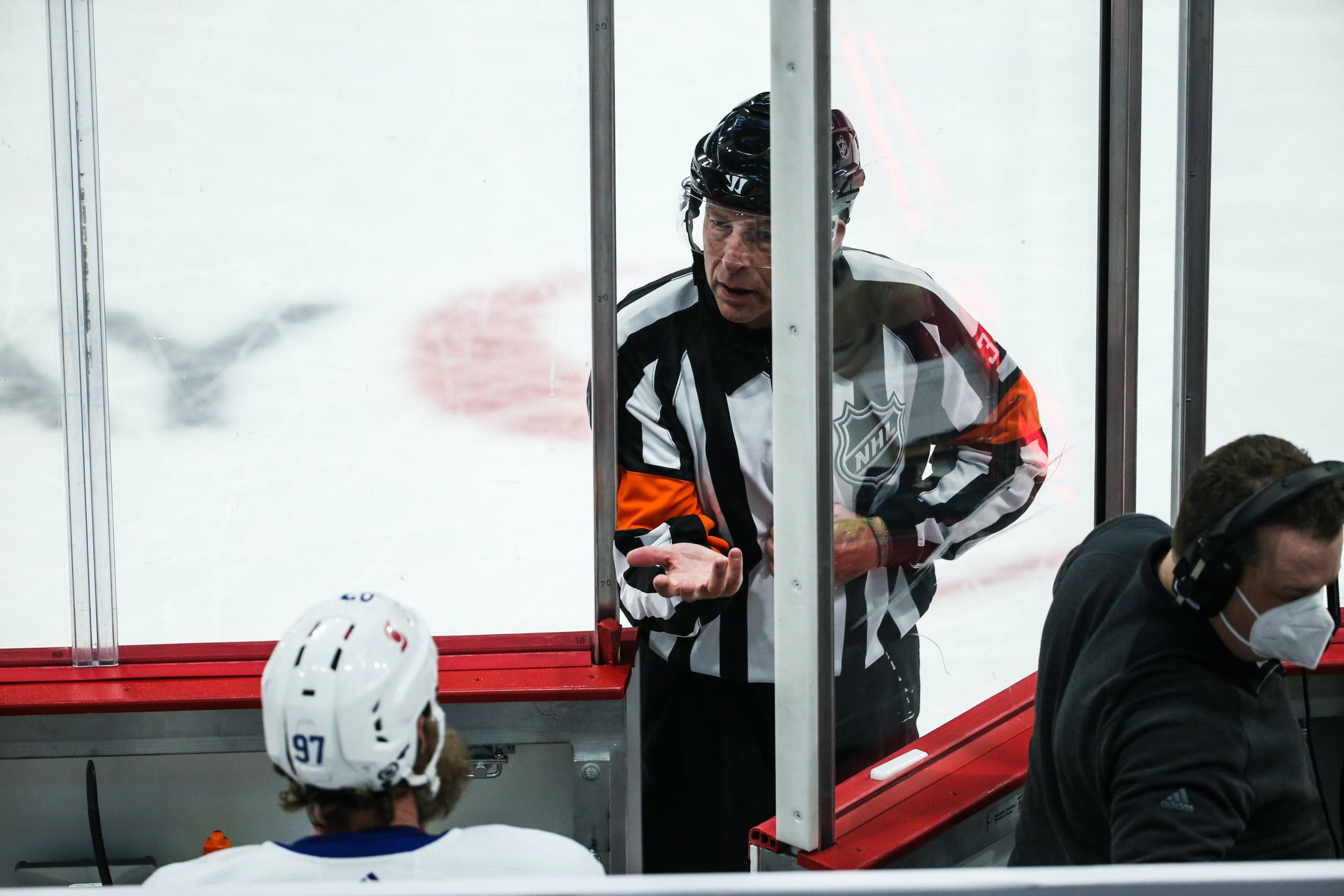 By Jon Steitzer
1 year ago
The Leafs have a solid roster. That’s assuming that hooks, holds, trips, slashes and all the other things that top talents around the league have to put up with were actually called by officials. Even ignoring how disgraceful the Leafs powerplay was, the increased time their opposition would be playing short handed would probably benefit the Leafs, who are good enough at 5v5 to get away with an inexplicably bad powerplay. Hell, even the bad powerplay would probably be improved with increased calling of obstruction penalties deterring what generally happens in front of the net when there’s a man advantage.
Of course, asking the NHL to make a move towards calling its rulebook seems like a very big ask. There are plenty of teams already built of the idea that penalties are at best a tit for tat trade that takes place throughout the game and as long as you don’t something truly heinous like shooting the puck over the glass, there’s no need for punishment. There’s also the matter of whether the players truly want this as there are no shortage of players hanging around the league solely on their ability to look innocent enough while slashing the opposition’s hands.
That brings us to today. As the Leafs once again remake the roster it’s important to acknowledge the crossroads the league is at. Not since the dead puck era has there been such a push for the rulebook actually being used. If the league does decide that it’s time to play by their own rules, the Leafs already have a foundation for improved outcomes. Four capable offensive talents, a number of capable puck moving defensemen, and a bottom six forward group that relies on positional play, speed, and reach, rather than brute force to limit the chances from their opponents.
Counter to that, the NHL hasn’t always been quick to do what’s best for the sport. With new TV deals in the states, goal scoring and power play chances, and building off the star power of the leagues best players would make a lot of sense. Of course they seem more focused on preserving game runtime, and the fact that there could be a learning curve with some slow moving penalty laden games to start the year seem to be scaring the league off the better long term decision. At times it seems like the NHL is like if the NFL marketed their sport around the offensive line.
Still, it’s the NHL and stubbornly holding back their own product is what they’ve done for years. We’re going to get a small taste of change at best and things will largely remain the same, and in that case there will be a bitter pill that needs to be swallowed by many, and that is size does matter.
Size does matter in the NHL even if the NHL did start calling the rule book, because there will always be a place for players that make you keep your head up on the ice, but more and more, especially in the playoffs when the rulebook becomes even more of arbitrary concept we’ve seen the benefit of having giants sit on the leagues most talented players. As much as you might hate the kind of hockey, don’t you hate losing in the first round even more and perhaps it’s time for the Leafs to embrace it. Not embrace it like paying David Clarkson $5M/yr embrace it, but that happy medium where you find some depth that does dirty work kind of embrace it.

So who’s available that fits with the current state NHL?

@Cedric Paquette is an unrestricted free agent in Carolina who definitely fits with a tougher bottom six type role. His possession metrics aren’t terrible, and with averaging about three hits per game during the regular season he’d be a tough guy by Leafs standards. He also has the benefit of clearly having enough talent to belong on a NHL team.
@Nick Bjugstad might come with a discount compared to his last somewhat insane contract. At 6’6 he’d make a lot of Toronto area uncles happy, even if he was only throwing around one hit per game. He did throw 20 hits in the six playoff games for the Wild this year, so Bjugstad could just be an exercise in patience for the Leafs.
Someone like @Michael Raffl also provides that increased bottom six toughness at a likely affordable price, without doing damage to the overall roster. He cost $1.4M last year and he’s probably not going to be even that expensive next season.
As for defense, well, finding a potentially rugged defensive defenseman has never been that hard in the NHL, but finding one that you don’t hate poses an interesting challenge. @Jamie Oleksiak probably will get the most attention for what he can do, but players like @Jordie Benn, and @Kevan Miller will probably warrant some consideration too. Of course the Leafs would also be wise to consider bringing back @Zach Bogosian.

Now if the NHL alludes to things changing…

Now it never hurts to have a few guys around who know how to throw heavy hits. A little Pierre LeBrun Big Boy brand hockey isn’t a bad thing, if you start calling the rule book, you have to make sure those players can keep up and aren’t reliant on holding and hooking to make up for their speed deficit. If Zach Hyman and Blake Coleman were valuable before, their price would be through the rough in a by the book NHL. At the same time, this pretty much ends Zdeno Chara’s career at this point.
Like I said, earlier, if the NHL moves towards calling the rulebook, the Leafs are already in a great place. Not that they are squeaky clean, perfect little angels, but seldom has the Leafs game been about slowing down their opponent.
If that is the direction the league goes in, free agent options like @Mikael Granlund and @Nikita Gusev might be the better fit, as loading up on secondary scoring and positionally sound forwards would probably be wise, the lack of size wouldn’t hurt Toronto.

The reality is the Leafs are in a situation where no matter the circumstance, a bit more edge wouldn’t hurt them. Even if skill remains the name of the game, as it probably should, some skill players that aren’t afraid of making contact from time to time could benefit them. I’ve been pushing a @Michael Bunting agenda for a while, and think that he fits with the idea of player willing to cheat a little, but has the talent to be of value in scoring situations as well. Someone like @Mark Pysyk as well makes sense from a depth perspective as well.
I guess the conclusion I’m coming to is that just because there is an increasingly loud voice for the refs to call the rulebook precisely, it doesn’t mean that the NHL is going to do it. We might get an October plan to crack down on obstruction calls, but the data shows that goes away in time (via @ineffectivemath).

(In case you were wondering how the Bruins have remained consistently good despite losing the talent they have.)
Building a team around a properly called rulebook seems like a great idea if you are going with a number of one or two year contracts, or looking for a good start out of the gate for the season, but ultimately, you need your cheaters. Though you probably still want to find ones that can still play hockey fairly well, just in case.
Uncategorized
Recent articles from Jon Steitzer