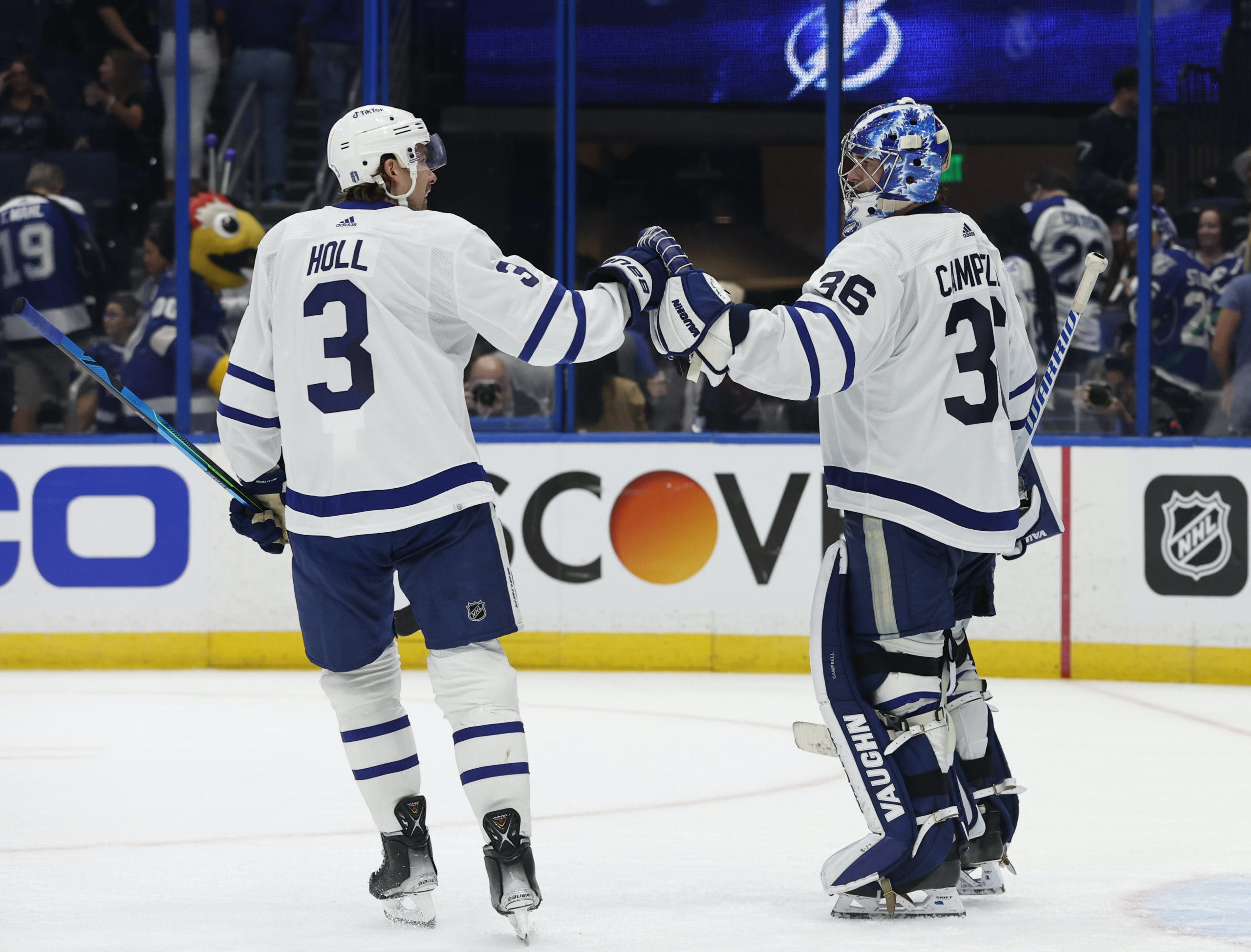 By Jon Steitzer
8 months ago
One of the best practices in Toronto is ignoring anything that comes out of Steve Simmons’ mouth. At worst it’s going to make you stupider, at best you’re giving attention to someone who should be fading away into obscurity. Press conferences are a different beast though, and if he actually gets called on to ask a question, we all have to suffer. That’s what happened after Game Four.
So here we are, dissecting what we should actually think of Justin Holl. A player who once again sparks the hated eye test vs. stats debate, but a player who deserves the due diligence of having his performance examined after a pretty bold take.
Let’s start with the here and now of it, and look at the Leafs defensemen in the playoffs. It’s a small sample and Rasmus Sandin hasn’t even had a chance to factor into this conversation yet, but let’s assume some recency bias and look at who the Leafs worst defenseman might be.

So with the worst being highlighted in yellow and the best is highlighted in blue, we can see that Holl’s only shortcoming seems to be the lack of playing time. That also could point to him being sheltered and that’s going to skew his numbers a bit, but Toronto also utilizes him on the penalty kill, so there’s that too. Interestingly, Holl has been on the ice for the fewest expected goals against them and has the best xGF%. His Corsi has been adequate, but his high danger Corsi is the second worst after the terrible numbers that Liljegren has put up. Still, if you are looking at this table, it seems like either Liljegren or Lyubushkin are the worst defenseman of the series.
Now, that’s not going to fly with a lot of people who are very excited about Liljegren and want to see a lot more of him. And that’s also not going to fly with people who want the “Russian Bear” aspect of Lyubushkin’s game and feel that his size and physicality are too important to come out of the lineup. Holl can be a vanilla option to either one of them, and also has to contend with the appeal of the mystery box (i.e. bringing Sandin into the series.)
Here’s how Holl compared in the regular season to the Leafs blueliners:

So there isn’t anything that had Holl standing out as the worst, he just wasn’t the best either. By the numbers most Leafs defensemen don’t warrant being thrown under the bus, it does highlight that there has been some drop-off for Liljegren and Lyubushkin doesn’t really have the offense aspect to his game to balance out the numbers. Also, Muzzin is certainly taking steps in the playoffs to show he’s still a player, although TJ Brodie helps a lot with those numbers.
The numbers bring us back around to the eye test with Justin Holl, and from my own set of eyes the biggest issues with him seem to be that he doesn’t move his feet enough and he reacts to plays a little slower than others. He makes up for it by being positionally sound, but his reaction and starting from stopped often put him behind the play. He does fall into that Martin Marincin type of player where the numbers say he’s fine, but he can be a hard player to watch at times. I can appreciate the sentiment of those who feel he should be the odd man out because of that, or at least I can appreciate it to the point where we need to look at other players through just as harsh a lens.
You could easily accuse Morgan Rielly as being overwhelmed against the best offensive talent of the Lightning. Ilya Lyubushkin has been caught not moving his feet and reacting slowly just as often as Holl has, and Liljegren really did look out of his element in the first couple of games and as much as you want to see him get another chance, that chance can wait until Game One of the second round.
Holl just doesn’t have Rielly’s offense, Lyubushkin’s physicality, or Liljegren’s upside going for him in the conversation. He’s an easy dog to kick, and that’s frequently what happens.
For Holl’s part, he put together a strong Game Five in response to Steve Simmons’ remarks and showed why he deserves to be in the Leafs lineup. It would be nice to see that same level of play continue in the more challenging road setting for Game Six.
Data Sourced from Natural Stat Trick
More from TheLeafsNation.com
POINTSBET IS LIVE IN ONTARIO