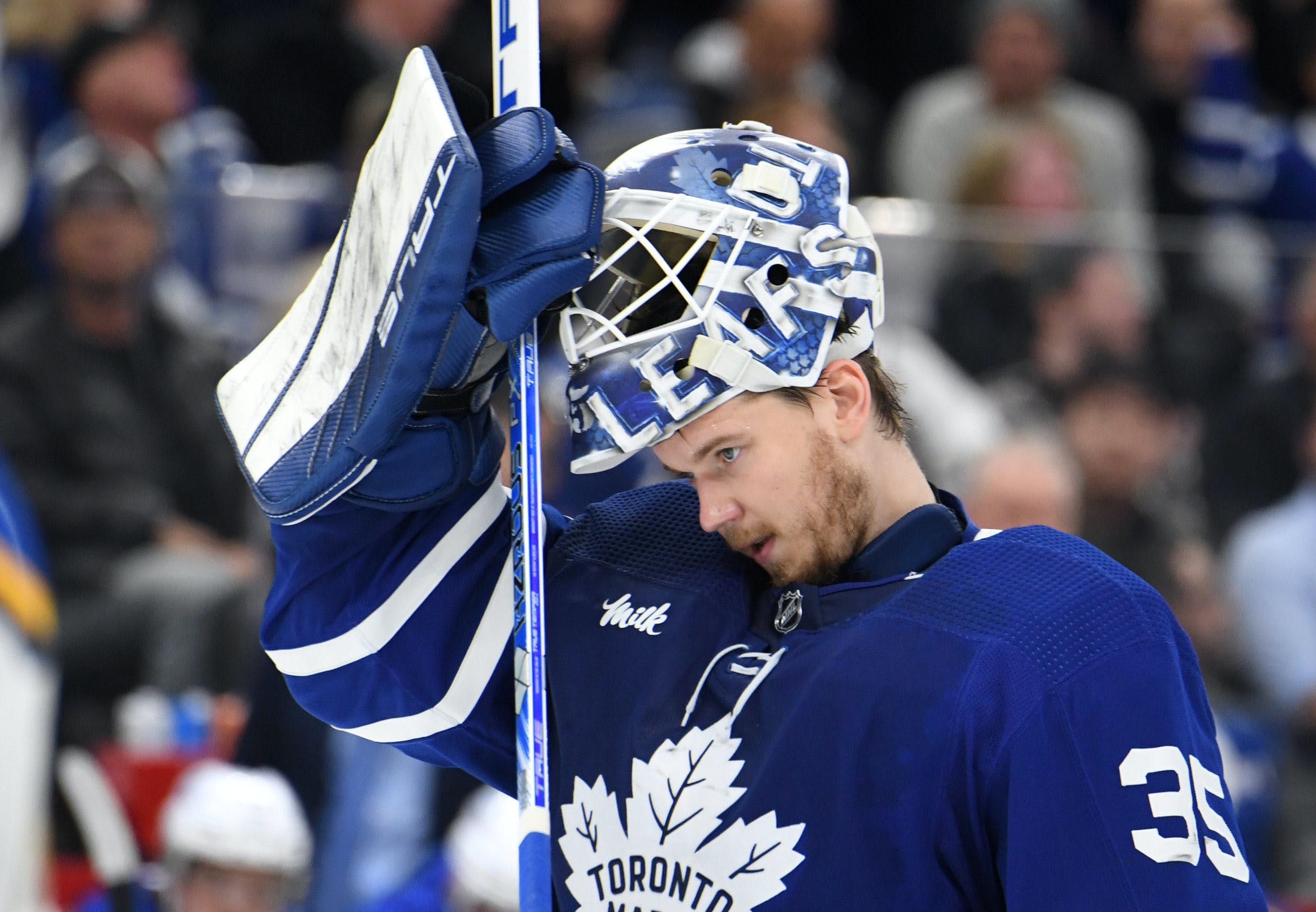 By Steven Ellis
13 days ago
It wasn’t that long ago that Ilya Samsonov was putting up Vezina Trophy-caliber numbers.
It was a small sample size, for sure, but few goalies had the numbers that the 25-year-old Russian had in the first half of the season. By mid-December, Samsonov’s .953 5-on-5 save percentage was top in the league, and he was near the top in every other category. But in his next five games from Dec. 15 – Jan. 7, Samsonov had a .867 save percentage and minus-4.73 goals saved above average at 5-on-5, placing him 64th out 68 goalies and last out of the 33 goalies to play five games in that span. Matt Murray wasn’t much better, but Samsonov was at the absolute bottom.
Samsonov’s starts have been a bit sporadic, but after stopping every shot sent his way in the final two periods. plus overtime, against Florida in a comeback effort on Tuesday, coach Sheldon Keefe elected to go back to Samsonov on Thursday against Winnipeg. Murray’s struggles as of late has definitely been concerning, so this is a perfect opportunity for Samsonov to steal a game and get back in the win column.
Samsonov has a 13-4-1 record overall with two shutouts, giving the team more than ample value at $1.8 million. But he’s a pending RFA, and with Joseph Woll tearing up the AHL, we’re starting to get to the point in the season where talks about the future come into play. But that’s a story for another day.
For now, it’s about getting momentum back in the crease. And that’s hard to get when you got two guys swapping nearly every game. It’s great when they’re both playing fantastic like they did earlier in the season. But when everything is going wonky, the spotlight returns to the same position that has seemed to be a sore spot over the past few seasons.
In Keefe’s eyes, the decision to return to Samsonov after Murray started earlier this week was all status quo.
“I think in case like this, the (starting goalie) decision is easy,” Keefe said Thursday. “Sammy came in and did a terrific job for us (Tuesday). Murray is coming off playing two in a row so this made sense.”
But for Samsonov, the lovable first-year Leaf with a penchant for great post-game quotes, every start is a new opportunity for him to attempt to steal the crease. With Murray struggling to remain consistent, the door remains open for anyone to be the 1A. Someone is going to have to take control ahead of the playoffs, and , just based on full-season performances, Samsonov has a solid argument to become that guy. He’s confident and playing the best hockey of his career, living up to the hype that made him one of the best young goalie prospects in the league.
Right now, it’s all about how he responds to bad games, and he’s had a few of them recently. So there’s no better opportunity to restore the fanbase’s belief in him than a big game against a Winnipeg team with an incredible performance. Samsonov made 30 saves in a big 4-1 performance in October when filling in for an injured Murray, and that’s when he started to turn heads. He’ll remember that, and after saving Toronto’s bacon earlier this week, he’ll be riding high.
Again, every start is an opportunity for Samsonov to prove he’s the man. He’ll start tonight, and likely get the start against the New York Islanders on Monday if the Leafs are going to continue bouncing between the two goalies. The Rangers, Senators, Capitals and Bruins are all on the docket in the near future, so there are some significant opportunities to show off.
But tonight, against a dangerous Jets squad, all eyes will be on Samsonov.
Editorials
Recent articles from Steven Ellis