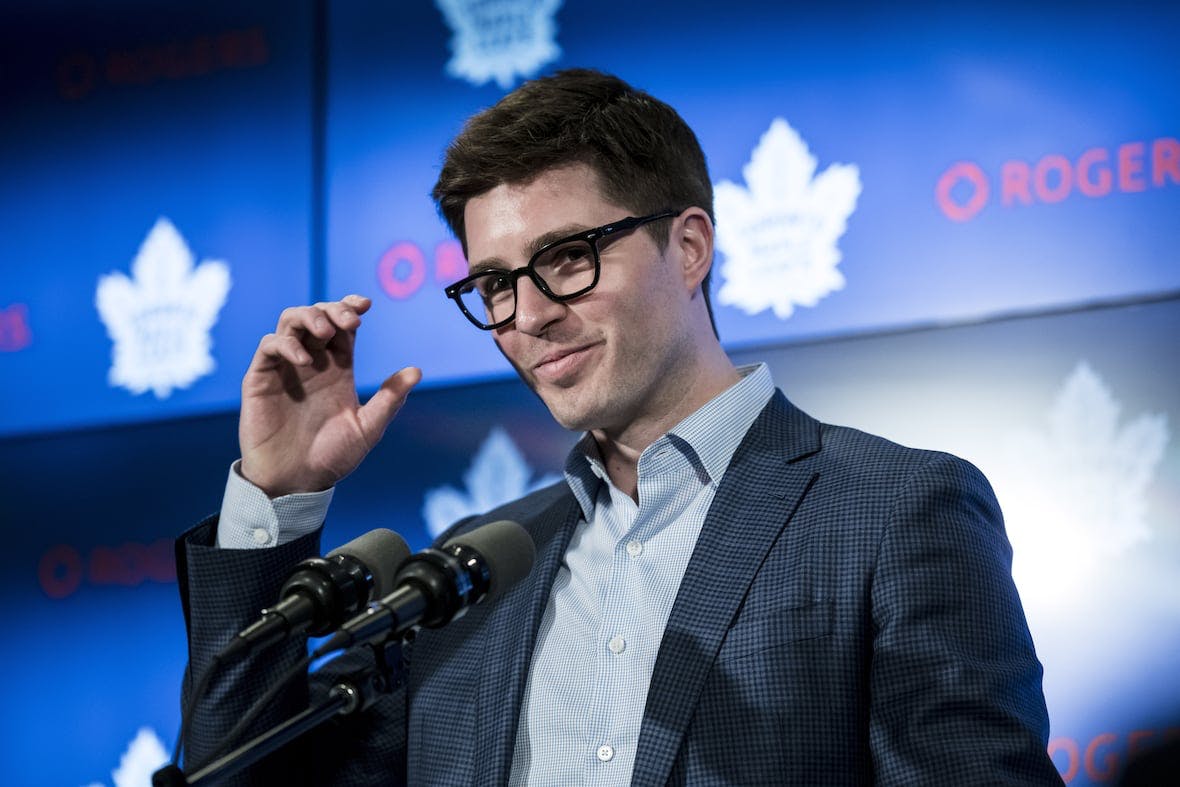 By Tony Ferrari
1 year ago
The Toronto Maple Leafs are usually one of the more active teams in NCAA free agency thanks to the fact that they seldom blink at the thought of opening up their wallets and their penchant for exploiting the ‘untapped markets’ of the NHL prospect pipelines. They have been fairly quiet the last few years, however, signing only two NCAA free agents in the past four years. This year they kick off their activity by signing Notre Dame forward Alex Steeves, a junior who has steadily improved every year with the Fighting Irish.

The Scouting Low Down

One of the first things that become evident when watching Steeves is that the combination of puck skill and creativity is quite high. There are moments in games when the New Hampshire native seems to have the puck on a string and he is teasing defenders by pulling the puck in and out, evading the defensive stick, and creating space for himself. The ability to manipulate a defender’s positioning is integral to the success of a player that plays the game as Steeves does offensively. He looks off defenders like an NFL quarterback on the powerplay, selling that he’s doing one thing before pivoting to his true intention.
A good, not great skater overall, the newest Leafs prospect has solid agility and mobility when it comes to maneuvering and evading pressure. He would benefit from improving his explosiveness to aid in getting a bit quicker off his first few steps but his overall mobility is perfectly fine. Anticipation and awareness allow him to get to his spots with relative ease, exploiting the holes in the defensive structure. He lacks the speed to truly burn defenders to the outside with consistency as well.
He gives an honest effort in his own end, playing with energy. He loses his positioning at times and he may not always fill the passing lane perfectly but he stays active, gets his stick on the ice, and works to turn play around. He is a solid bumper option in transition and he understands when he has the room to run and when his best option is to turn to his teammates to allow them to work transition up ice with a bit more speed. He should continue to try and hone in his defensive game because that will allow him to provide a bit more value, specifically lower in the lineup in order to provide a clearer path to the NHL.
With 15 goals in 29 games, Steeves led Notre Dame in markers by almost doubling up his frequent linemate, Landon Slaggert who had eight. He doesn’t have a big booming shot or a lethal release but he does have crafty hands and the ability to shoot from unique positions. The deception that is so prominent in his stickhandling transfer over to his release. Whether a puck is in his feet or he is reaching to a puck after a quick deke to the inside, Steeves can get a well-placed shot on net with the flick of his wrist.
As a playmaker at the NCAA level, Steeves seemed to have the requisite skill to make the passes but often seemed to be trying to do a bit too much. He had the ability to make that big, highlight-reel pass but there was also a propensity to turn the puck over. He needs to reign in the desire to try to make the ‘wow’ pass and resign himself to making the right pass.

As with every NCAA free agent, the expectation should start out fairly low. His contract is set to come into effect for next season, meaning that if we see the Irish’s leading scorer in Toronto, it likely comes on an Amateur Try-Out contract with the Toronto Marlies. Starting his pro-career at the AHL level is to be expected and it will allow the young American the opportunity to work with the Toronto development staff on the areas of concern that have been identified by the team. This could also give him an opportunity to get into a few AHL contests as well,
A strong training camp prior to next season will go a long way to showing that the 21-year-old is ready for a full-time role with the Marlies. Honing his craft in the minors is going to be key for his development as he will need to adjust to the speed of the pro-game.

Shot Chart from Steeves 2020-21 season with Notre Dame courtesy of InStat
After a season or two in the AHL, Steeves should be primed to earn himself an opportunity with the big club. He isn’t likely to land a role in the top-six with the current roster outlook and the prospects in the pipeline ahead of him in the pecking order. His deceptive puck skills and the enthusiasm that he plays with at both ends of the ice should give him a path towards filling the bottom-six scorer role that the Leafs seem to enjoy employing. He could be an asset of a secondary powerplay unit as well with his ability to engineer offense with the extra space and time. Steeves does and decent job of working himself and/or the puck into good shooting positions. Exploiting the middle of the ice a bit more will go a long way but the feisty forward has shown the ability to thrive in tight as well.

At the End of the Day…

The success rate of college free agent signing is spotty at best. For every Tyler Bozak, there are ten Mitch Hults’. The fact of the matter is, the realistic role and production that can be expected are similar to what recently departed Leaf and the 2016 offseason prize Jimmy Vesey provided. The ability to put up replacement-level or slightly above replacement-level production and an energetic game at both ends of the ice should allow him to play at the next level. His deception and offensive creation are clearly his biggest strengths but he does have some refinement to make and he’s going to need to take a step in order to make it to the NHL. It comes down to the player’s passion and drive to improve.
Does this trade win the NCAA agency period this year? Probably not. Is Steeves an interesting and intriguing prospect that checks a lot of the boxes that Dubas seemingly looks for? If you can get a couple of games out of him on a cost-controlled deal the next few seasons. Filling the bottom-end of the roster with entry-level and cost-controlled deals will be key with the way the Leafs’ big boys making the money they do. Signing Steeves give you options going forward as he develops and comes into his own in a couple of years.
Uncategorized
Recent articles from Tony Ferrari