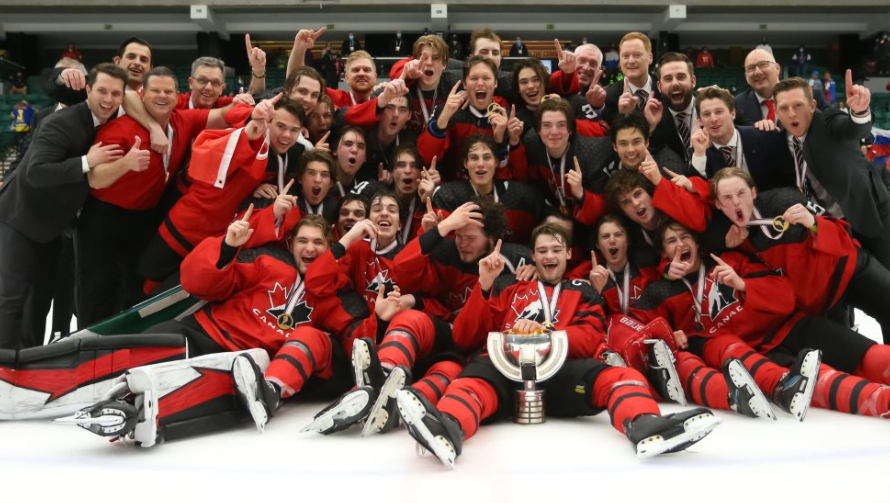 By Tony Ferrari
1 year ago
Comments
Well, that was fun. The World Under-18 Championships came to an end last night in a great gold medal game that saw Canada and Russia renew their rivalry for world supremacy, at under-18 hockey. Canada faced off against Sweden in their semi-final and handled them quite easily, although not as easily as their 12-1 win in the round-robin. With super-prospect Connor Bedard leading the way with a hat trick, goaltender Ben Gaudreau making 16 of 17 saves, and captain Shane Wright, the Canadian kids blew out the Swedes 8-1. It’s not often you can blow out a team twice in the same tournament but it’s not often that the Canadian roster is as loaded as this one is.
In whats become the norm in Group B, the other semi-final was much more dramatic. The Russian squad, powered by their own super-prospect Matvei Michkov, looked to be one of the most dangerous offensive teams in the tournament. Having played the Finns in the round-robin – Russia’s sole loss at the U18s – they knew what to expect. With a pair of goals from captain Nikita Chibrikov and Ivan Miroshnichenko, as well as Michkov pitching in, the Russian team went up 6-3 through 50 minutes of play. That’s when the Finns did what they do, stick around and make it scary. First, it was the Finnish captain Samu Salminen who scored to pull within two goals nearly immediately. The deficit became one shortly after when 2022 draft prospect Joakim Kemell scored with just under three minutes to play. That would be all that the Russian’s surrendered though and they were off to the gold medal game.
Advertisement
Ad
Advertisement
Ad
That sets up two incredible matchups for the medal rounds. The Swedes and Finns battle it out for bronze in a rivalry that’s been ongoing for ages. The Scandinavian brethren always put on a good show against each other and this one should be no different with high-level prospects such as Fabian Lysell, Isak Rosén, and Simon Edvinsson on Sweden’s roster while Aleksi Heimosalmi, Samu Tuomaala, and Samu Salminen highlight the Finnish club. This matchup unfortunately didn’t wind up being all that incredible.
In the gold medal game, Canada and Russia have an immense amount of talent on both rosters. Both have a 2023 NHL Draft eligible-super prospect in Bedard and Michkov, who both finished near the top of the tournaments scoring. Both have a potential top-10 pick in 2022 with Wright – the likely number one – and Miroshnichenko both playing extremely well throughout the tournament. Both rosters have a boatload of 2021 talent as well with a list that spans much of each of their rosters. This was a very fun game to watch as a fan and a scout. Talent was on display all over the ice.
Advertisement
Ad
Advertisement
Ad

The bronze medal game was set to be a classic and it wound up a blowout. The Swedes, who underperformed at points during the tournament, finally seemed like their talent matched their results. Putting up eight goals was impressive but shutting the Finns out as well meant they played a lot of good hockey throughout the night. It started early and often with Rosén opening the score just five minutes into the game. With Simon Robertsson scoring again late in the period on an assist by Lysell, the Swedes went into the first intermission with a two-goal lead.
Sweden’s top defender opened the scoring a few minutes into the third period. Mattias Havelid let go of a shot from the top of the circles and Edvinsson banged in the rebound as he was coming out from below the goal line. Less than two minutes later, the Swedes tacked on another as Albert Sjoberg took a drop pass off the rush and sniped it farside. The Swedish dominance was seemingly setting in. The second period went on scoreless from there. After 40, the Swedes had built up a commanding lead.
Advertisement
Ad
Advertisement
Ad

🇸🇪 Simon Edvinsson (#2021NHLDraft) takes a shot from the point and it trickles past Koskenvuo. https://t.co/0tCiMx3QON pic.twitter.com/pFUePnjqbz

The third period was where things broke really open. The Swedes began to pour it on. They scored about every five minutes through the period. With Oliver Moberg (5:53 in the third), Noah Hasa (11:19), Noah Ostlund (14:55), and Rosén (19:23) all scoring in the third period, the Finns had clearly been outmatched on the tournaments final day. The Swedes found a way to fight through inconsistencies to win the day and take home the bronze medal. It’s not gold but at least they won their final game.

Canada v. Russia. The matchup seemed destined with the ridiculous talent on each roster. The game would be highlighted by the two 2023 draft-eligible phenoms in Connor Bedard and Matvei Michkov. Who better to kick off the scoring than the Russian star? In typical Michkob fashion, he is able to pounce at just the right time. Gathering the loose puck off his teammate’s deke and then showing that he’s just better than most players by beating Canadain netminder Ben Gaudreau clean from the slot.
Advertisement
Ad
Advertisement
Ad

Who else to open the scoring for Team Russia? #U18Worlds

🇷🇺 Matvei Michkov (#2023NHLDraft) picks up the loose puck and rips it into the twine for goal number TWELVE.https://t.co/IrFisl0sEe pic.twitter.com/hk6htg0ZpH

With timing that will make this game an instant classic to look back on in a couple of years when we are looking at the 2023 draft. Bedard saw what Michkov did and decided he was ready to show just what he’s all about. Showing speed, skill, strength, and just the will to score all on one play. It’s safe to say that two teams are going to be ecstatic in a couple of years when these studs are draft eligibles.

Russia would take the lead back on a nice shot by Dmitri Buchelnikov, his first of the tournament, beating Gaudreau on the high blocker side from just off the slot. Russia carried the lead for much of the first period. Play was fairly even although the Canadians did slightly outshoot the Russians. Before the period could end though, Canada’s captain Shane Wright tied the game up. On a powerplay late in the period, Wright rotates to the top of the faceoff circle and then starts to fade into the circles before a pass comes to his stick. Turn, fire, celly. The Captain Canada gets the game knotted up with under a minute in the first period.
Advertisement
Ad
Advertisement
Ad

Back and forth we go!!

The second period was a bit of a weird one. With Canada taking three penalties in the period, they put themselves down a man repeatedly but weren’t burned for it. They would add two goals as well to go up 4-2 mid-way through the frame. Brennan Othmann with a sharp angle snipe and Logan Stankoven with a wicked wrister, the Canadians looked like they were taking control by the end of two.
The third period featured a bit of a fight back from the young Russians. With the Canadians yet again putting themselves down a man, the Russians capitalized finally as Vladimir Grudinin pulled the Russian squad within one goal in the final. The game was a battle for both teams and the 4-3 score was indicative of it. Both teams wanted the gold. But only one could prosper. With under a minute to goal and the Russian netminder pulled, Connor Bedard finds Shane Wright – because of course – to score the empty netter and secure the Canadian’s first gold medal at the U18s since 2013.
Advertisement
Ad
Advertisement
Ad

GOLDEN YARDSALE! Canada locks up the Gold Medal at the Men's #U18Worlds! 🥇 pic.twitter.com/0TXjVenLPv

The U18s were one of the most fun tournaments of the year. They always provide incredible excitement, drama, and buzz for the draft. This year in particular is going to be important as players such as Gaudreau, Ethan Del Mastro, and others on Canada’s roster have only played these games this year because of the OHL COVID shutdown.
Matvei Michkov, Connor Bedard, and Shane Wright wound up being the tournament’s top scorers. Three players who could all return to the event next season. Michkov approached Alexander Ovechkin and Cole Caufield’s tournament record for goals in a single event. He had 12 and needed 14 to match the record. Shane Wright missed two games and still tied for the team led in scoring, two points back of Michkov for the tournament lead. Tied with Wright was Bedard who matched McDavid’s U16 total from the 2013 event that saw Canada last capture gold. To say the future of hockey is bright would be an understatement. We have superstars and legends on the rise and we just watched the first matchup between the next generation. Get excited hockey fans.
Advertisement
Ad
Advertisement
Ad