It’s early, but things are encouraging when it comes to Ilya Samsonov as the Leafs’ long-term option 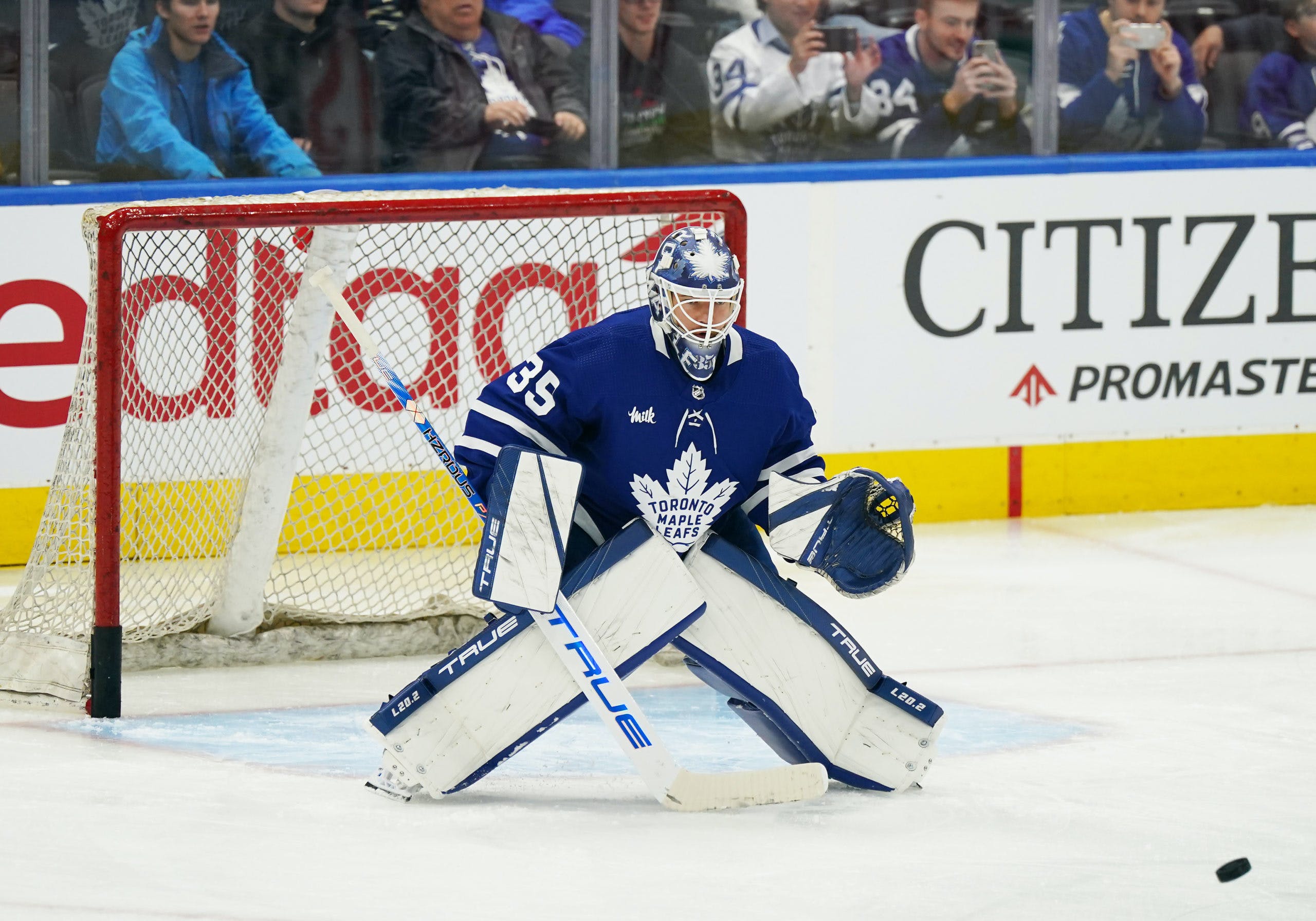 By Jon Steitzer
1 month ago
To say that that the expectations bar was set low for Leafs goaltending coming into this season is a bit of an understatement. The narrative was that Matt Murray was an oft-injured, borderline AHL goaltender on a terrible contract. To some extent, I personally took the bait on that, hook, line, and sinker.
For Ilya Samsonov it was his generally underwhelming record to date (as a 25-year-old) with the Capitals and if Washington, the team that knows him best, was ready to walk away from him that he couldn’t be that good.
Both Samsonov and Murray have proven their critics wrong in their small (somewhat injury-plagued) samples and while the memory of small samples of Jack Campbell is still fresh in the heads of  Leafs fans, there is something particularly appealing about Samsonov as the long-term option for the Leafs in net and that is his age.
Ilya Samsonov being at the top of the league in most major goaltending stats (albeit through 11 games played) is damned encouraging and the fact that he’s doing it at an age when most goaltenders begin to hit their stride certainly inspires some hope that this could be who he is as a goaltender. The Leafs having the potential to look up a consistent netminder for the prime of their career is something the organization hasn’t really accomplished in a long time. Toronto has been great at bringing in established goaltenders to have significant multi-year success stories for the Leafs, but you really have to go back to Felix Potvin to find a youthful netminder with the full trust of the team.
It is the potential long-term upside of Samsonov that has me wondering if we see the Leafs lean on him a bit more than Matt Murray throughout the remainder of the season. Samsonov always seemed like he had a bit more potential to be the workhorse than Murray, given that Murray has never been able to avoid injuries, even in his best years in Pittsburgh. There is a bit more motivation to give Samsonov the net more from that maintenance perspective as well.
Murray, of course, is partially here because of his playoff success or at least that’s how that narrative goes. It seems reasonable the Leafs want to keep him in optimal condition for that if they aren’t 100% ready to hand the net to Samsonov yet at that point either.
Now, this season is absolutely the priority, but I don’t think it’s completely unfair to look ahead to what comes beyond this year and Samsonov’s expiring contract obviously fits into that. And while people bringing up the Nylander contract is a bit of a downer, I feel the Samsonov contract is a bit more favourable, both because it’s an RFA contract and because as good as Samsonov has been so far this year, the Leafs will still be able to leverage a bit of uncertainty to keep it from ballooning too far out of control.
The Leafs also find themselves in a situation where if it does balloon out of control they wouldn’t lose an asset for nothing. And if Samsonov is indeed the goaltender of the future and they need to pay him as such, the Leafs do have options beyond just the available cap space that can make it work without a summer of screaming about cap hell ahead of us (but it’s far too early to start talking about any of those things.)
Right now it’s easy to appreciate that it’s difficult to lean in one direction more than the other in net. Samsonov and Murray have both done well, Samsonov may be doing better, but not so much that you want to take opportunities away from Murray. Eventually, though the Leafs will need to choose who is their 1A and at the latest, it will be evident come playoff time when we see who starts game one. The best-case scenario is that Samsonov continues to make his case for the job.
Editorials
Recent articles from Jon Steitzer