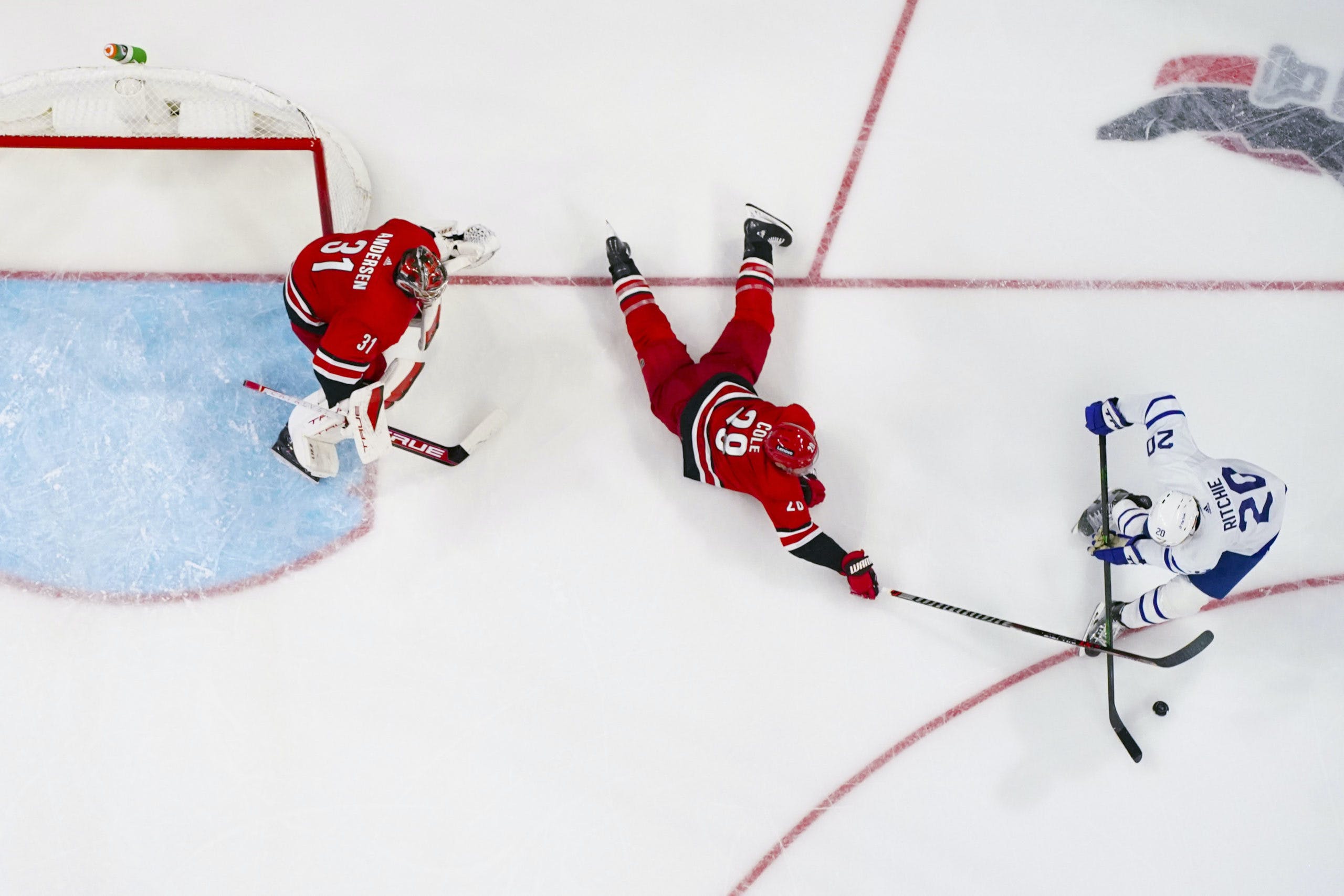 By Jon Steitzer
1 year ago
I feel like this article is begging to be met with sunk cost fallacy responses, even if it is remarkably premature. After four games of Nick Ritchie, I pleaded for the need for Leafs fans to be patient with him and for the Leafs to find a role better suited to Ritchie’s talents. Now here we are nine games later and Ritchie is still barely functioning, this time in a fourth line role and not many fans are singing his praises. Still, I feel there is benefit in taking some time to make Ritchie work, even if all he’s given us in his first 13 games is frustration and further evidence that the Leafs were right to select William Nylander ahead of Ritchie in the draft.
The scoresheet evidence that we have that Nick Ritchie is a Leaf is limited to one assist so far. A secondary assist on a Michael Bunting powerplay goal. That probably serves as another interesting tidbit in the summary of Ritchie’s struggles, and that’s despite his inability to produce offence he’s still cemented to the second powerplay unit. At 5v5, Ritchie has only been on the ice for one goal for and presently sits at a 16.67% GF%. That is unfortunate to say the least, and he’s presently sitting at 94.4 PDO.
At least there seems to be some acknowledgement from both the Leafs and Ritchie that so far things haven’t gone well… (via Mark Masters of TSN)

“Just getting used to playing with different guys,” Ritchie said of the challenge. “There’s been some chances. I made a few plays that could’ve went in. Just trying to get around the net more and hopefully I can do that in the next few games.”

I think what both Ritchie and Keefe have stated ring true of what needs to be sorted out when it comes to Ritchie. Ritchie is still finding his footing with the Leafs and working with a number of different players, none of whom have really played with a player like Ritchie during their time with the Leafs and to Keefe’s point of part of it being on the Leafs to get him there fits with the fact that the Leafs don’t have a spot for a power forward in the style that has been successful for them the past few seasons. Perhaps the best utilization of a power forward on the Leafs would be Wayne Simmonds early in the 2020-21 season before his wrist injury when he was a solid contributor on the Tavares line.
When it comes to looking at who the Leafs have tried to get Ritchie to click with it’s probably more important to look at who Ritchie hasn’t had much of an opportunity to work with. Ritchie has rarely played with any of Kerfoot, Nylander, and Bunting. The players on the list are intriguing because Kerfoot plays a style similar to frequent Boston linemate Charlie Coyle, and William Nylander working with Ritchie on a line with Tavares and Ritchie might also provide the necessary play driving element that was missing in the early days of the season.
There are a few truths that need to be considered when it comes to Ritchie:
The thing with Ritchie as well is that if you don’t buy in to the notion that the Leafs need to player a tougher, gritter game the idea of acquiring Ritchie, playing Ritchie, etc is not going to sit right with you. It becomes easier to look at him as a player that didn’t work on the 1st line, isn’t working on the 4th line, and doesn’t have the resume that warrants a better opportunity, and for that reason I can fully appreciate the sunk cost fallacy argument, even if it is premature.
Ritchie needs to be better and thankfully the Leafs and Ritchie are acknowledging that. The good news is that it’s game 13 and there is plenty of time to explore what Ritchie is or isn’t capable of for the Leafs.
Data sourced from Natural Stat Trick, Hockey Reference, PuckPedia, and NHL.com
Uncategorized
Recent articles from Jon Steitzer