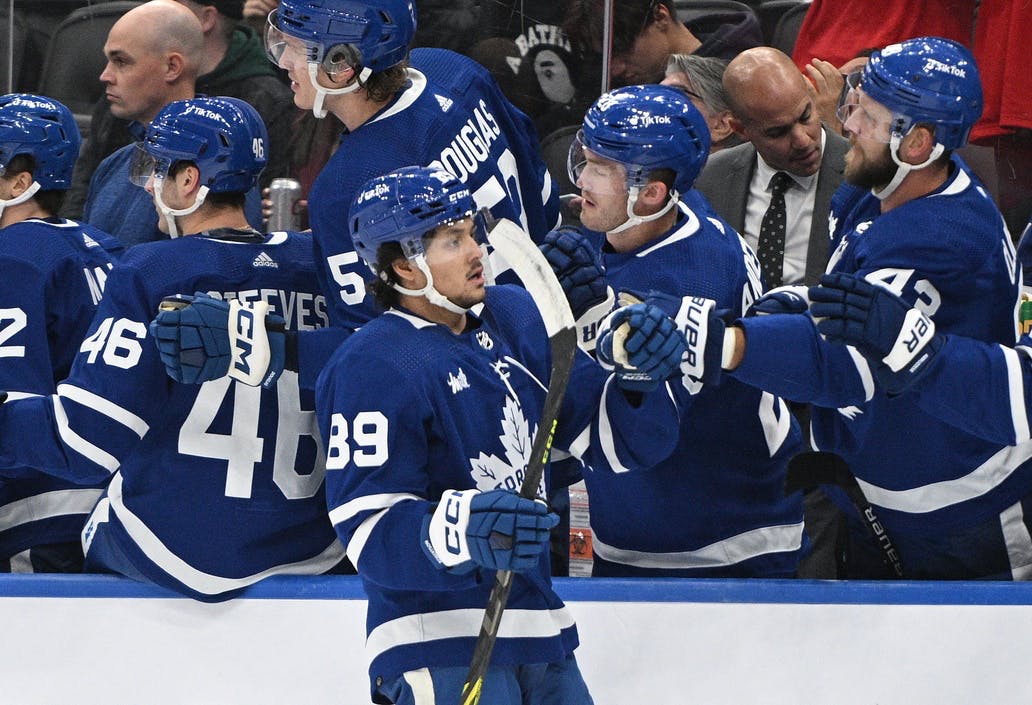 By Michael Mazzei
4 months ago
Alex Kerfoot and Calle Jarnkrok made some changes to their resume as they were forced to play defence after two blueliners went down with injuries. Then the Leafs proceeded to shut the door for a 3-0 win against the Canadiens on Wednesday night.

William Nylander had another solid game and was noticeable at both ends of the ice. He was making quick strides leading the rush, protecting the puck effectively, and generating plenty of scoring chances. He was even playing with an edge as he laid a few hits as the game progressed and was playing well on the penalty kill.
Nick Robertson came into this game with something to prove and he played with a purpose, scoring the opening goal of the game off a wicked wrister from the left circle. He was making crisp passes on the power play and showcased his deadly release all game long. He was looking to prove he is deserving of a shot on an NHL roster and answer Sheldon Keefe’s call for an increased drive. It’s safe to say Robertson did exactly that.
Denis Malgin ended up leading the team in scoring with a goal and an assist and continued to build his case for a spot on the opening night lineup. Alex Steeves played well and were generating many scoring chances, Nick Abruzzese scored a power-play tally late in the third, and Pontus Holmberg was making his presence felt at both ends of the ice.
Most importantly, Matt Murray was solid in the crease in his first 40 minutes wearing the Blue and White. He only faced 16 shots in that span and the majority of the chances were hardly challenging, but he delivered when called upon. Erik Kallgren was also solid in the final 20 minutes, where he came up big during a penalty kill late in the third period.
Murray and Ilya Samsonov’s first appearances were encouraging, to say the least, so one can only hope that the steadiness can carry over to the more meaningful games. A more confident Kallgren will certainly help improve the goalie depth even further.

The injury woes continue to pile on for the Leafs, as they lost Jordie Benn and Carl Dahlstrom in the first period that forced them to go with four defencemen for the majority of the night. As a result, Keefe turned to Kerfoot and Jarnkrok to get reps on the backend for the majority of the night.
At this point, the Leafs will need to put bubble wrap around all of their remaining players just to get through the rest of their preseason. Before the puck drop, they were already without John Tavares, Pierre Engvall, Jake Muzzin, Adam Gaudette, and Timothy Liljegren. Combine that with Rasmus Sandin remaining unsigned and the Leafs are now significantly shorthanded before the start of the regular season.
While it was quite amusing to see the Leafs trout out four defencemen on the penalty kill and an encouraging sight to see Jarnkrok and Kerfoot remain effective on the back end, the Leafs cannot afford to see more of their depth go down with injuries. In the meantime, expect to see guys like Victor Mete, Mac Hollowell, and Filip Kral get a longer look as the preseason progresses should Benn and Dahlstrom be out for a while.
At the very least, this should help speed things along with the Sandin negotiations.

As mentioned earlier, Nylander was by far the most impactful player for the Leafs in the game and got an assist for his efforts. Malgin led all of the team in scoring on the night and has further improved his chances of making the team. Murray and Kallgren stood tall when called upon.
But it was Kerfoot and Jarnkrok working double duty that stole the show and were by far their best players on the night. This game could have gone south quickly with the remaining four defencemen being forced to double shift, but the two Swiss Army knives kept things in order and looked good doing it. Kerfoot and Jarnkrok demonstrated their versatility in a big way, proving that they can fill in as blueliners in desperate situations. It certainly helped that TJ Brodie, Morgan Rielly, and Mark Giordano worked well alongside them.
Curtis Douglas certainly stood out as he was making some plays and came close to scoring a goal, but his skating remains a work in progress. He has made impressive strides in his development and is coming off a 34-point season with the Marlies. Randi Milani, the Leafs’ skating consultant, has done a great job helping Douglas become a better skater and another season of work could help him propel his way into the conversation as the top call-up candidate for next year.

Robertson has always had an elite release and this was another excellent shot that opened the scoring which ultimately proved to be the game winner. Should he keep producing, the Leafs will have no choice but to keep him on the opening night roster.

Keefe said after the game that Benn suffered a groin injury while Dahlstrom had a shoulder injury, which will keep both players out of commission for a while. Don’t be surprised if the Leafs decide to experiment with the defensive pairings for the rest of the preseason to try out different combinations.
Up next, the Leafs make the trek up to Belleville for a game against the Senators on Friday night. You can catch the action on Sportsnet One with puck drop scheduled for 7 p.m. EST.
Stats from Hockey-Reference.com and Natural Stat Trick.
More from TheLeafsNation.com
News
Recent articles from Michael Mazzei