Just what are the Leafs getting in David Kämpf? 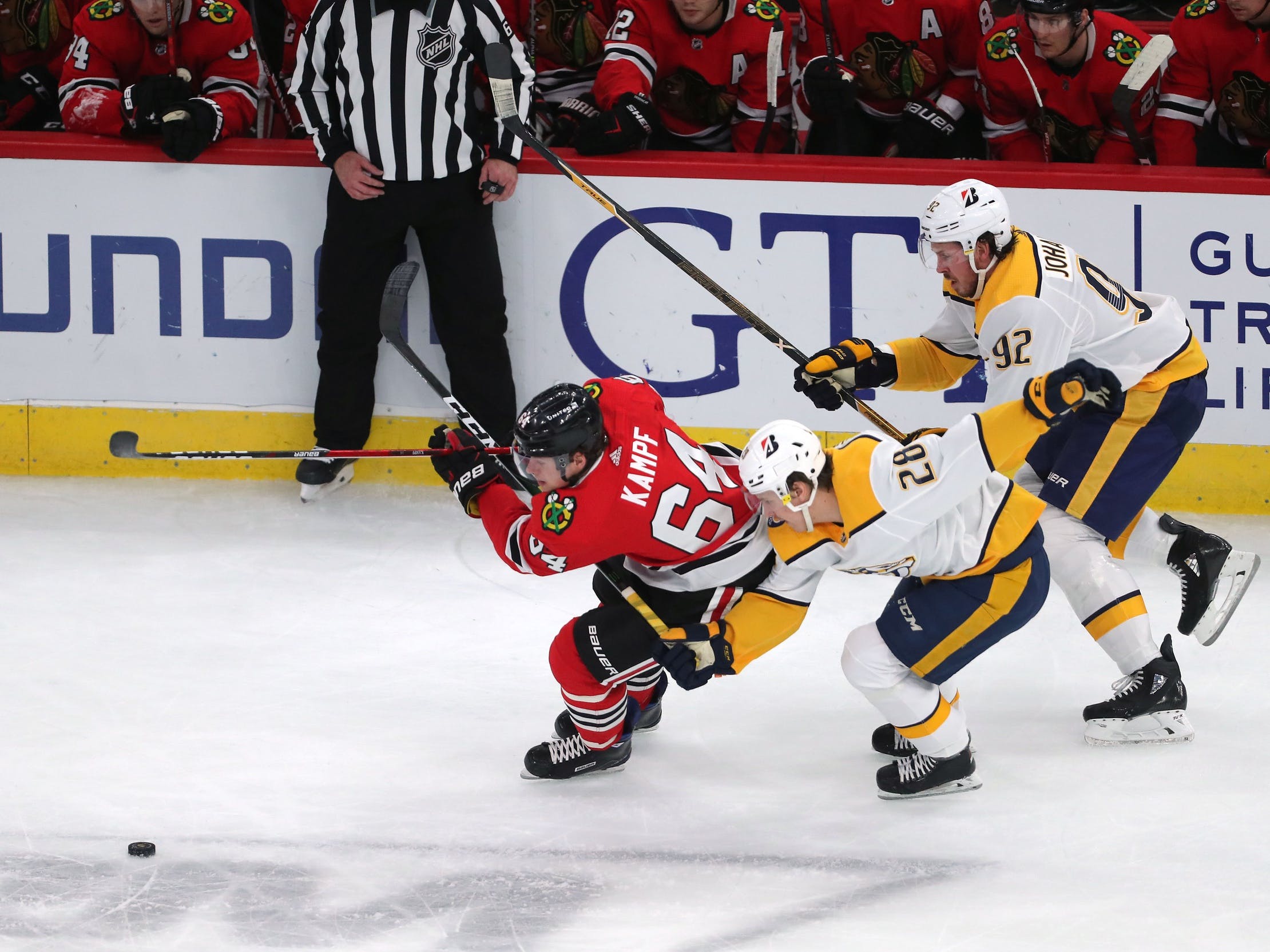 By Ryan Hobart
1 year ago
One of the least known additions to the Leafs’ roster for next season is the former Chicago player, David Kämpf. The center has amassed four relatively quiet seasons in Chicago’s bottom-six at the NHL level.
The Leafs announced at the start of free agency that they’ve signed Kämpf to a two-year contract at $1.5M per year. While Kämpf isn’t the top-six add people were clamoring for (those two open spots appear to be a competition between Mikheyev and new adds Käse, Ritchie and Bunting), the newly acquired center will likely be a staple on Toronto’s fourth line next season.

In order to understand what the Leafs are getting in this new acquisition, we must start with where he came from.
While he doesn’t come from Krypton or get a bunch of shrapnel in his chest, David Kämpf has his own origin story worth telling. Born in the Czech Republic, Kämpf came up through the junior Czech leagues with the Pirati Chomutov organization. He spent nearly his entire development with Chomutov’s various development programs through U16, U18, U20, Czech 2, and eventually the Czech Extraliga, their premier league. He also played on the Czechian World Juniors team in both the 2013-14 and 2014-15 seasons.
In the Extraliga, Kämpf finally developed an offensive touch in the 2016-17 season, 4 years after his draft year, scoring 31 points in 52 games. Following this developmental growth spurt, he was signed as a free agent by Chicago in 2017, and began his North American career in the AHL with the Rockford Ice Hogs. Partway through the 2017-18 NHL season, he was called up to play for Chicago in the NHL, and hadn’t left their roster until now.
When his entry level contract expired after 2 seasons, Chicago extended him for another two at $1M per year, and then he left for a chance on the open market, where Kyle Dubas and the Maple Leafs picked him up.

Let’s start the on-ice analysis with how Kämpf was used in Chicago. This can often be good context for the rest of the statistics we’ll look at to gauge how good Kämpf was, and can be expected to be. From Evolving Hockey, the chart below shows his zone starts for the last four seasons:
You can see the trend quite clearly that once his rookie season was over, Kämpf started to be used more in a defensive role. While he’s obviously not on the level of someone like Pierre-Eduard Bellemare or Manny Malhotra of a defensive zone faceoff specialist, he’s still not getting very many opportunities to start shifts where it’s most fun: in the offensive zone.
This can also be a symptom of the fact that Chicago has not been very good in the few seasons Kämpf has been there, and so they likely have more defensive zone faceoffs than offensive zone ones to dole out.
For ice time, this helpful chart from hockeyviz.com shows that Kämpf was typically a third liner for Chicago, with some forays into a second line role, likely when injuries forced him to.

The last piece of context we need is what kinds of players Kämpf was typically playing with. His most common linemates this past season were Brandon Hagel and Dominik Kubalík. Let’s look at how that combo played together using hockeyviz.com’s Environment Distiller tool.

You can see that this combination was pretty effective for Chicago, having a positive effect at both ends of the ice (negative xGA/60 is a good thing).
However, from Natural Stat Trick’s Line Tool, we can see how Kampf played when he was away from those two, and how they played without him:
This table shows again that the Kämpf, Kubalík, Hagel combination was good for Chicago. It also shows that when Hagel and Kämpf are playing without Kämpf, in a similar amount of ice time, they’re significantly worse.
But, the most telling, most concerning, and most statistically significant data in the table above shows that Kämpf has been significantly worse when not playing with Hagel and Kubalík. This is something to keep in mind when looking at the stats that look at all of his playing time together.

Now that we have the context we need, let’s take a look at how Kämpf performed in the last three seasons for Chicago. We’ll leave out his rookie year, since was saw above that his usage was a bit different, and the effects of coming into the league could skew what we think of him now.
From Evolving Hockey once again, the charts below show the following, in separate tables for clarity:
We can see that in his rookie season he had his best performance in terms of CF%, and then his CF/60 really drops off, causing a similar drop in the CF%, which is the ratio between CF/60 and CA/60. Throughout his career he’s never had a good GF%, meaning that he’s usually getting outscored. Overall, not a pretty picture.
This table shows essentially the same table as above, but expressed as Relative to Teammates (RelTM). This compares Kämpf’s numbers to the average numbers his teammates have. Looking at this, we can see if the numbers from the first table are being pulled up or down because of strong or weak teammates.
A couple things are interesting about this, like his low RelTM CA/60 in 18-19, as it’s much lower than the other years. This means that he’s a positive defensive influence compared to his teammates. We can also see that the goals, shots, and Corsi were significantly better this past season than years prior. We sort of covered this earlier when we noted how good he, Hagel and Kubalík had been together.
This last table shows Kämpf’s performance in the GAR/WAR model by Evolving Hockey. Each of the “xxx_GAR” columns are different components of the model, which sum together to create the total “GAR” column. The “WAR” column is just a translation of “goals” into “wins”. This glossary helps tremendously with understanding the table.
This model appears to not like David Kämpf very much at all, showing him as significantly below replacement in both of his last two seasons. Because the model takes teammate effects into account, it gives Kubalik (+5.7 GAR) and Hagel (+4.1 GAR) more of the credit for last season’s success, since Kämpf’s stats are pretty rough when not with those two as we showed above.
Normally, with the different components, you can find where a player is excelling, like defensively for instance. So even though they might struggle in other areas, you can note that they’re significantly adding benefit in a certain area. Unfortunately, this isn’ the case for Kämpf, since his only positive component is drawing penalties, and it’s minor at best.

What the Leafs will be counting on is that Kämpf’s poor statistics are a result of his 3rd line role on a not very strong team. In a 4th line role on a stronger Leafs squad, logic dictates that he’ll perform better. How better, though, is an unanswerable question right now. It heavily depends on who joins him on that 4th line, and how the individual person will deal with the transition. While we can do a lot with stats and math, the human element does override in some instances.
Kämpf could have a total turnaround next year and become a good value depth player, or he could fall off even worse than his performance in Chicago. However, what the stats say is most likely, is that he will be a generally negative influence on the team’s performance.
This isn’t encouraging, as Kämpf is one of many pieces the Leafs are adding to improve on the fringes of the roster, yet he’ll seemingly bring things downward. However, the advantage is that he should be playing minimal minutes, he came fairly inexpensively, and there’s no reason the Leafs can’t scratch him if everyone is healthy and either Adam Brooks or Pierre Engvall have that 4C slot locked down. Kämpf is a depth piece, and the season will not come down to whether he’s a -1 WAR player or a +1 WAR player. It will come down to, as it has in the past years, the performance of the Leafs’ stars. But it would be nice to have positive depth to help them out when they’re not at their collective best, and I fear that David Kämpf isn’t that.
Uncategorized
Recent articles from Ryan Hobart