Källgren has been great, but can’t be the goaltending solution for the Leafs 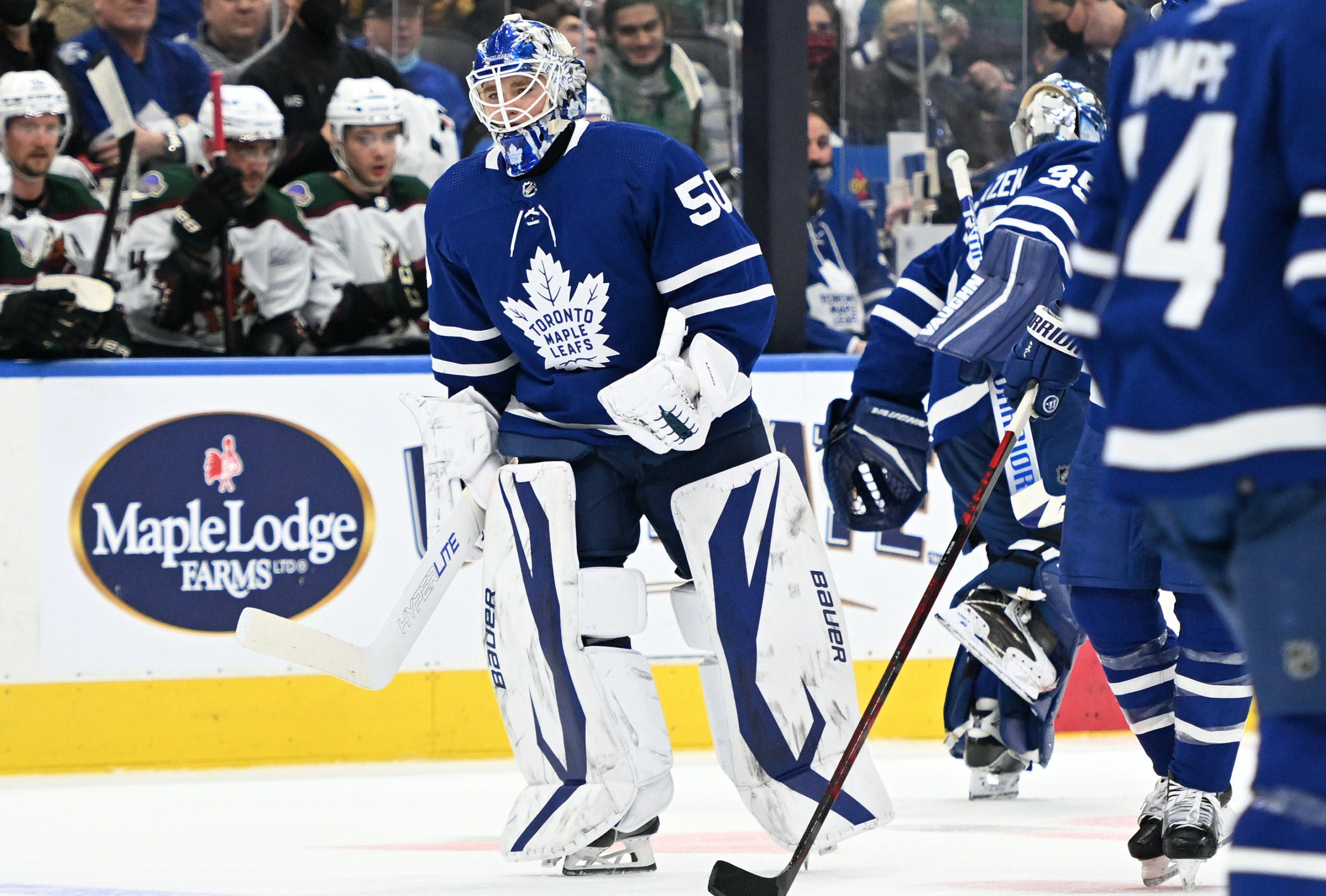 By Jon Steitzer
10 months ago
Let’s start with the fact that the Leafs needed Källgren. Fans needed Källgren. Generally, everyone has a lot more hope today than they did yesterday because of Källgren. In his two and a half games as a Leaf, Källgren has allowed just three goals, has a .963 save percentage and given the Leafs two wins and an overtime loss at a time when we thought the Leafs would be leaning into Mrazek’s .884 save percentage until the equally unreliable Jack Campbell returns from his injury.
The fact that Källgren is getting the start again on Saturday against Nashville is great. He certainly looks like the best path to victory for the Leafs, and they are wise to make the most of that. It’s just a matter of how long it can last.
As a new goaltender in the league, Källgren benefits from shooters not knowing him. That’s a concept that Leafs fans should be awfully familiar with considering how often Toronto gets “goalie’d” by AHL netminders and backups.
There’s also the matter of Källgren’s history showing that he’s not a .963 goaltender (surprise, no one is), but he’s also not really a .920 goaltender at either the AHL or SHL level. He was .911 in the SHL last season over 21 games and has a .904 in the AHL for the Marlies this season in 26 games. It’s probably not a surprise to anyone that this is a streak, but I guess why wouldn’t you want to get as much out of this streak as possible? Källgren did put up a .930 save percentage in his 10 SHL playoff games last season. If this is another case of getting hot at the right time, who are we to say stick him on the bench?
The other piece that is important to consider with Källgren is that with the game tonight against Nashville, he’s played a lot of hockey this year by his standard. Last year in the SHL he finished with 31 games played combined between the regular season and playoffs. This year when you combine his Marlies and Leafs games he’s already at 30 games played. In the past decade, he’s had just three years where he’s played 35 or more games and has crossed 40 games just once. Similar to how workload could have been a factor in the sharp decline of Jack Campbell, there is a chance that Källgren will hit a wall at some point too.
So where does that leave the Leafs?
Well, it leaves them with a goaltender on a hot streak that should be able to hold the fort until Jack Campbell is ready to return. Pushing Mrazek aside definitely seems like it’s necessary at this point, and with the looming trade deadline, it is probably preferable to escape Mrazek’s cap hit than to try and see if he’ll ever play his way out of it. Mrazek has had 15 starts for the Leafs, and only 3 of them are considered quality starts. When the guy is telling us he’s not a fit, you’d hope the front office will listen to him.
Jack Campbell isn’t a lock to be a solution, and that needs to be acknowledged. Having Campbell off to deal with his injury and bringing him back in better condition provides a lot of optimism, and he has some strong months in his history with the Leafs, but he’s not entirely different than Källgren, in that you’re hoping for a goaltender that isn’t actively bad and has the potential to go on a hot streak. For what it’s worth, Mrazek has plenty of hot streaks in his past too. I’m sure it’s on the strength of those that he became a Leaf.
Looking outside the organization, it’s not like there is a goaltender you can point to that would come in and do anything different than what Källgren and Campbell have given the Leafs, but looking still makes a lot of sense. The workload factor and the performance from Mrazek warrants looking for help, just not expensive help.
For Saturday night, however, it seems like enjoying a goaltender on a heater is the best course of action. At 25 years old, Källgren could just be beginning to show the world what he’s capable of in net. So if you’re ready to choose optimism, Källgren seems willing to provide it.
More from TheLeafsNation.com
Uncategorized
Recent articles from Jon Steitzer