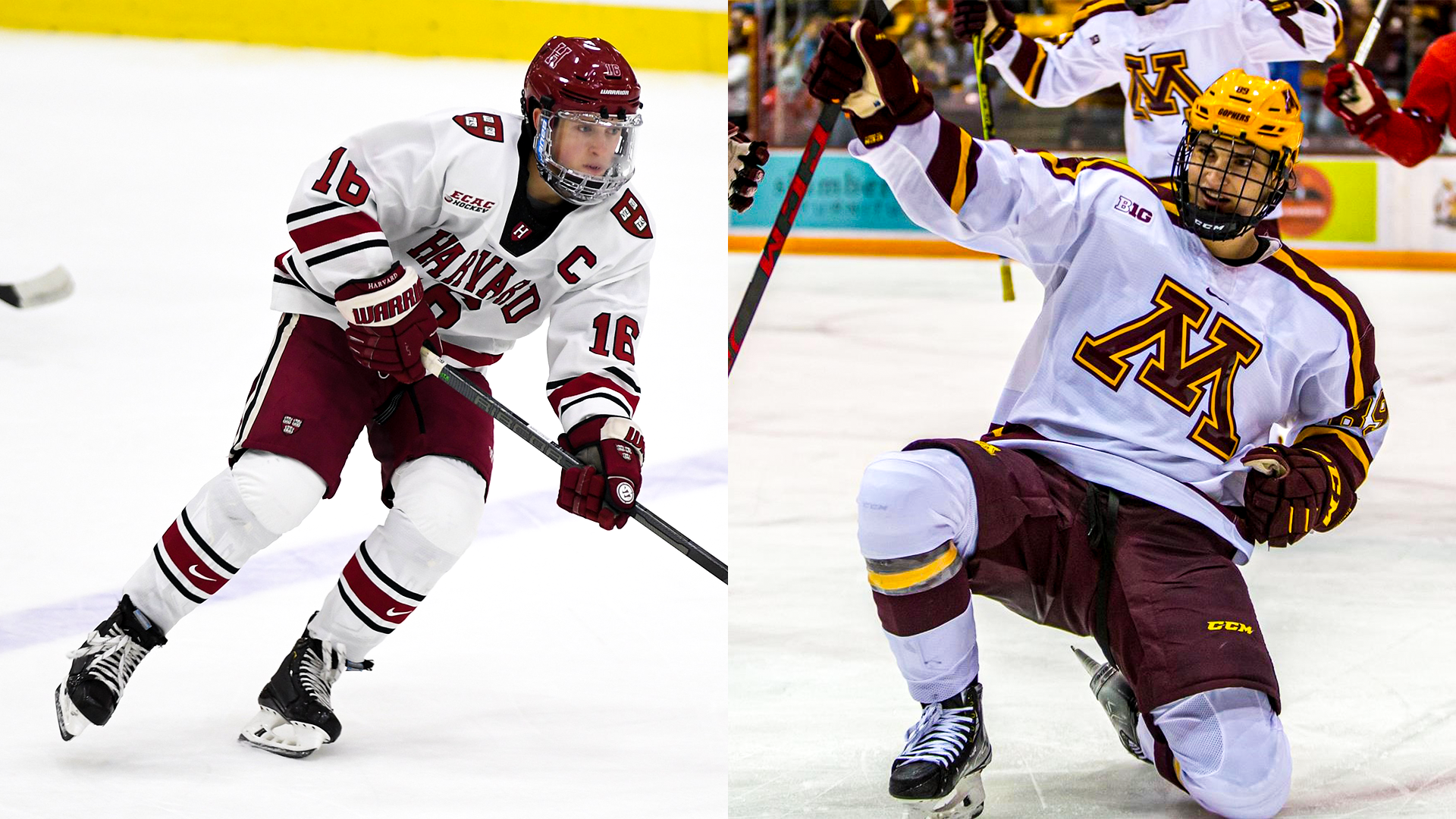 By Kyle Cushman
10 months ago
We’re one day away from the start of one of the most exciting tournaments on the hockey schedule, the NCAA Men’s Hockey Tournament.
For Toronto Maple Leafs fans, this means an opportunity to see multiple high profile prospects compete for the national championship over the next week and a half. Toronto has six prospects playing for four different teams at this year’s tournament, creating intrigue for Leafs fans on top of what is already set to be a phenomenal tournament.

Leading the way for Toronto is Matt Knies, their 2021 second-round pick. Although he is a freshman, Knies has burst onto the scene with the University of Minnesota, immediately becoming one of the most dangerous forwards in the Big Ten conference upon his arrival back in the fall.
In fact, Knies’ performance has been so remarkable this year that despite being less than a year removed from being a second-round draft pick, he earned his way onto Team USA at the Olympics and has been rumoured to potentially be signing with the Leafs upon the completion of his collegiate season.
Knies brings a unique blend of skills to the table. His combination of size (listed at 6-foot-3) and tenacity on the forecheck with an ability to get the puck into dangerous scoring areas has made him an effective offensive player all season long for Minnesota. Knies is relentless in the offensive zone, just as easily bulldozing through you on the forecheck as using his deft hands to deke around a defender and score from a tight angle.
With 12 goals and 29 points in 30 games for the Golden Gophers, Knies will be on full display in their first-round matchup against UMass. He showed his perseverance in the Big Ten championship game last weekend against Michigan, scoring two goals in the final minute as Minnesota fell one goal short against the overall top seed in the Wolverines.
Also appearing for Minnesota is 2019 fifth-round pick, Mikey Koster. A sophomore with the Golden Gophers, Koster plays a more minimal role than Knies, primarily playing on their third pair on his off-side on the right. He’s a fairly unknown prospect at this time, but keep an eye on him if you tune into Minnesota-UMass for Knies. I love his ability in transition up the ice.

The other real marquee player at the NCAA tournament among Leafs prospects is Harvard forward Nick Abruzzese. A 2019 fourth-round pick as an overage prospect out of the USHL, all Abruzzese has done since joining the Crimson is put up silly point totals.
Back in 2019/20 as a freshman, albeit at the more advanced age of 20 years old, Abruzzese led the conference in scoring with 44 points in 30 games. When Harvard cancelled their 2020/21 season due to COVID, Abruzzese elected to undergo hip surgery with a lack of games to worry about.
Despite missing a full season of action and undergoing significant surgery, Abruzzese did not miss a beat this year. On a young Harvard team with multiple freshmen high in the lineup, Abruzzese was leaned on to lead the way for the Crimson. His 32 points in 27 games did exactly that, as he shifted between the left wing and centre positions.
Just like Knies, Abruzzese also featured for Team USA at the Olympics and has been rumoured to be potentially signing with the Leafs come to the end of his collegiate season. With Abruzzese being two and a half years older than Knies as well, I think he’s a much more likely candidate to leave school and join the Leafs.
Also playing for Harvard is freshman defenceman and 2020 seventh-round pick, John Fusco. With just two points in 25 games, Fusco has played a very limited role for the Crimson and will likely see minimal ice-time at the tournament.
Harvard booked their ticket to the NCAA tournament with an overtime win over Quinnipiac in the ECAC championship game, and now face a tough test against a veteran heavy Minnesota State squad. Coming off of a trip to the Frozen Four last year, the Mavericks are a force to be reckoned with the likes of Nathan Smith and Julian Napravnik up front, Jake Livingstone and Akito Hirose on the backend, and one of the top goaltenders in the country in Dryden McKay.
The veteran Minnesota State Mavericks taking on the young, offensive Harvard Crimson is one of the first-round matchups I’m most looking forward to.

The final notable prospect from the Leafs system that will be playing at the NCAA tournament is 2020 sixth-round pick, Veeti Miettinen.
After a stellar freshman season in which he led the Huskies in scoring en route to the Frozen Four final, Miettinen has had a bit of an underwhelming sophomore campaign. His scoring has remained about the same despite St. Cloud State becoming a more offensive team than last year’s edition, dropping to sixth in team scoring.
Still, Miettinen boasts a lethal shot that can change a game at any moment, and his 10 goals and 23 points in 36 games are far from horrendous.
That being said, Miettinen and St. Cloud State are in for a tough matchup. The Huskies were upset in the first round of the NCHC playoffs and now face one of the NCAA’s best defensive teams in the Quinnipiac Bobcats. Quinnipiac goaltender Yaniv Perets’ sub-1.00 goals-against average is a daunting matchup, but if there’s one forward on St. Cloud State to bet on to be able to beat him with a bullet of a shot, it’s probably Miettinen.

The Rest of the Bracket

The final Leafs prospect at the tournament is Western Michigan’s Wyatt Schingoethe, a 2020 seventh-round pick. Schingoethe has had a tough season, going without a point this year and did not appear in the NCHC tournament at all. It is unlikely he gets into a game on the bigger stage that is the national tournament.
Although they do not have any Leafs prospects, it’s hard to ignore the juggernaut that is the University of Michigan. Boasting an unbelievable array of top NHL prospects including first overall pick Owen Power and second overall pick Matty Beniers, Michigan is the team with the biggest target on their back at this tournament. Assuming they don’t have a problem in their first-round matchup against American International (which they shouldn’t), a second-round matchup against either Quinnipiac or St. Cloud State will be must-see stuff.
Finally, if you do tune into Minnesota game(s) at this tournament, also keep an eye on free-agent forward Ben Meyers. He is Matt Knies’ linemate, so you’ll be seeing lots of him. Meyers also happens to be the top NCAA free agent this spring. The Maple Leafs have not dipped into the NCAA free agent pool often under GM Kyle Dubas, only signing Joey Duszak out of Mercyhurst and Alex Steeves out of Notre Dame since 2018, but Meyers is a strong option for Toronto if they go back to the NCAA free agent market for a second straight year.
Here is the schedule for the first round of matchups. While I have you, also check out Ontario’s university hockey! The Queen’s Cup playoffs have been fantastic and tonight are the semifinals. I’ll be on the broadcast for Ryerson vs. Brock, I hope you’ll check it out!
Thursday
Minnesota State vs. Harvard (Abruzzese, Fusco) – 12:00 pm EST
Minnesota-Duluth vs. Michigan Tech – 3:00 pm EST
North Dakota vs. Notre Dame – 6:00 pm EST
Denver vs. UMass-Lowell – 9:00 pm EST
Friday
Western Michigan (Schingoethe) vs. Northeastern – 12:00 pm EST
Michigan vs. American International – 3:00 pm EST
Minnesota (Knies, Koster) vs. UMass – 6:00 pm EST
Quinnipiac vs. St. Cloud State (Miettinen) – 8:00 pm EST
More from TheLeafsNation.com
Uncategorized
Recent articles from Kyle Cushman