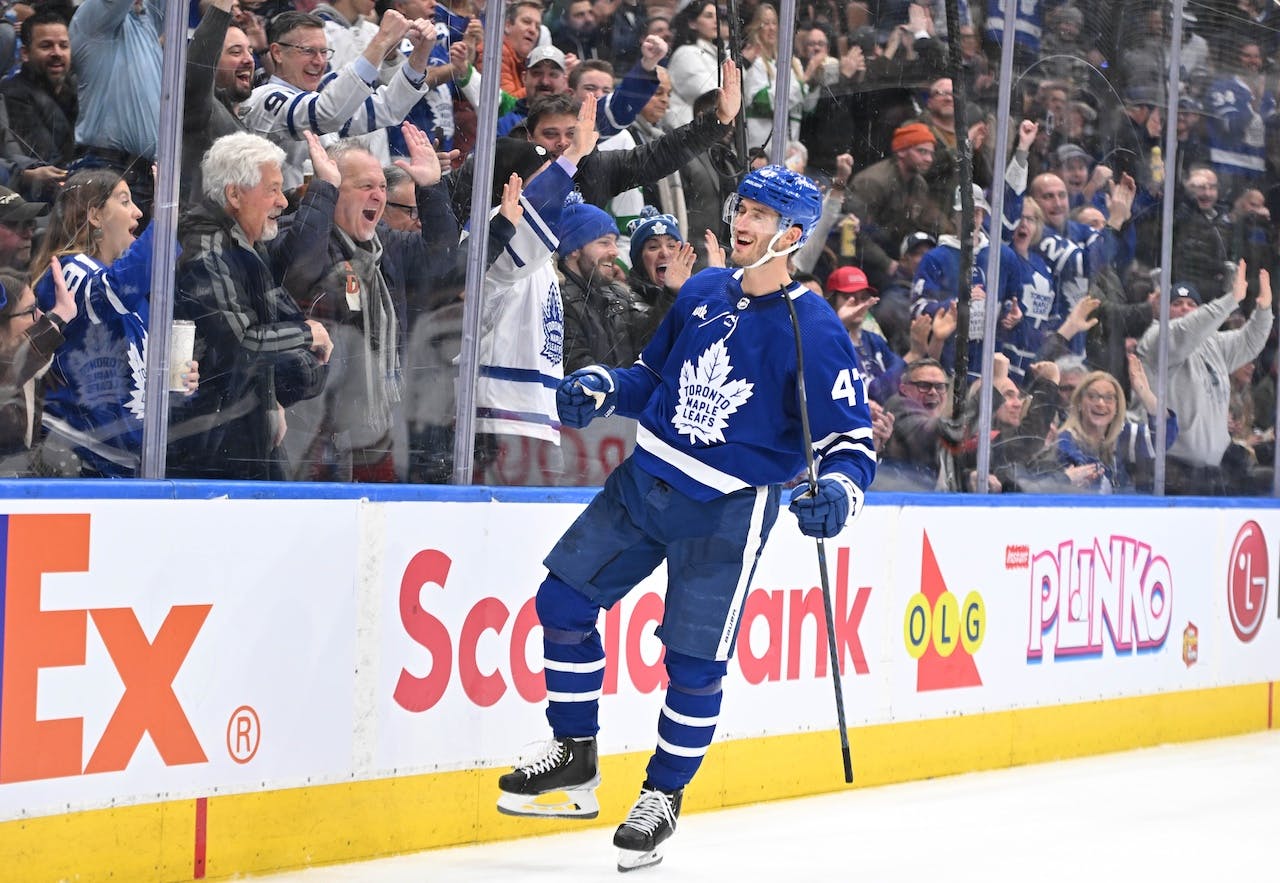 By Nick Alberga
1 month ago
To quote Mighty Ducks: D2, that wasn’t a win, that was a statement.
Mitch Marner notched two assists to extend his point streak to 23 games and Ilya Samsonov made 28 stops for his second straight shutout as Toronto smoked Anaheim 7-0.
In fact, the Leafs, who extended their team point streak to 15 games (12-0-3), have now blanked their opponent in three of the past four outings. Furthermore, they haven’t lost in regulation since November 11th, a 4-2 loss to the Pittsburgh Penguins in the Hall of Fame Game.
Meantime, 12 different Leafs registered at least a point. Alex Kerfoot scored twice while Pierre Engvall tallied a goal and an assist in his return from a one-game suspension. Also, Conor Timmins racked up three helpers and Michael Bunting potted his sixth of the campaign to extend his point streak to a career-high nine contests.
The Leafs went 1-0-1 against Anaheim this season.
Muzzy’s Muzings:
FRONT ROW SEAT
Lucky me, that was the first Leafs game I’ve attended in person at Scotiabank Arean since signing off on Sportsnet 590 The Fan after an OT win against Tampa in March of 2020. We all know what happened after that. What a first game back, right? I’m not the biggest fan of Toronto’s goal song, but I won’t lie, it was amazing to hear it seven times in one night. It’s pretty sad when you get to a point where you start to feel bad for the opponent, but I won’t lie, I was getting there midway through the third period. It’s been a tough year in Anaheim, there’s no doubt about it.
PIERRE ENGVALL
Coming off sitting for one game (suspension), I thought Engvall played his best game of the season. He was very noticeable, and it seemed like every shift he was out there, he made something positive happen. When he plays like that, it’s tough to rip on him. Great development. Furthermore, I think Toronto’s bottom-six/depth players have really stepped up lately, they’re making a difference on a nightly basis.
HOME COOKIN’
For years, I’ve been lamenting the fact that Scotiabank Arena has been an easy place for the road team to play in. Dare I say that’s changing? After this victory, Toronto is now 11-2-3 at home. Considering the Leafs could host a Game 7 down the road, this is a fantastic development. They need to make SBA a house of a pain, much similar to other high-profile buildings around the NHL like Amalie Arena in Tampa. You know it’s going to be a grind every time you go in there.
TEAM WIN
For me, the big picture story since that ugly loss in Anaheim on October 30th has been the team buy-in. It seems like every night, someone new has been chipping in with a big-time goal or play. On Tuesday night, I thought the depth players like Engvall, Kerfoot, Holmberg and Timmins were terrific. In the long run, you know your big boys will be there, but when the supporting cast plays like it has lately, the Leafs are a really tough team to play against. On top of that, the goaltending has been impeccable. I know Samsonov wasn’t overly tested in this one, but he made the stops when called upon, especially in the first period.
Highlight of the Night:
WHAT’S NEXT?
Big heat check game coming up on Thursday night as the Leafs visit the New York Rangers for the first time this season. New York has won four in a row. Toronto went 1-1-1 against the Rangers in 2021-22.
PSA: Don’t forget to check out ‘Leafs Morning Take’ with yours truly, Nick Alberga, and former Leaf Jay Rosehill every weekday morning LIVE at 11 a.m. ET on The Nation Network YouTube page.
Editorials
News
Recent articles from Nick Alberga