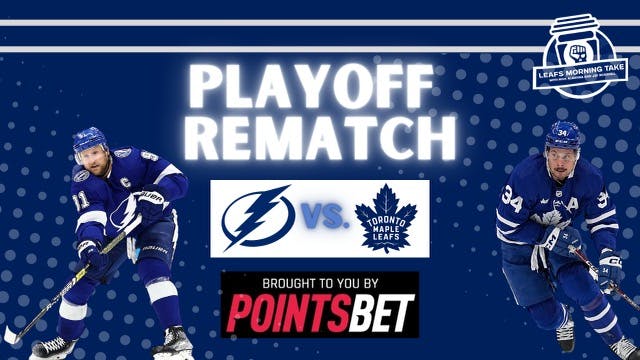 By Nick Alberga
1 month ago
Hello darkness, my old friend.
For the first time since eliminating the Leafs in Game 7 last May, the Tampa Bay Lightning will visit Scotiabank Arena tonight.
And it’s a sneaky big game.
We broke it all down on the Tuesday edition of Leafs Morning Take as Jay Rosehill made his triumphant return to his co-hosting duties.
Suddenly, Toronto is just three points up on Tampa for second in the Atlantic, and on top of that, the Bolts have two games in hand on them. Jon Cooper’s squad has won five in a row and are coming off a lopsided 5-1 victory in Montreal on Saturday night. Meantime, the Leafs, who’ve notched at least a point in eight straight outings at home, have dropped two in a row in regulation for the first time this season. Who doesn’t love a good measuring stick game, right?
Furthermore, we discussed Calle Jarnkrok’s pending return from a groin injury and his subsequent garden seat alongside John Tavares and Mitch Marner on line two. Also, Toronto traded Denis Malgin on Monday, so we dissected that move as well. The NHL roster freeze is now in effect until December 28th.
Lastly, we wrapped with the PointsBet Canada bet of the day:
Make sure to join us at 11 AM ET on Wednesday for a full recap of Leafs/Lightning, plus Tim Micallef will drop by!
Don’t forget to subscribe, like, and leave us a review wherever you’re checking us out!
Shows
Recent articles from Nick Alberga