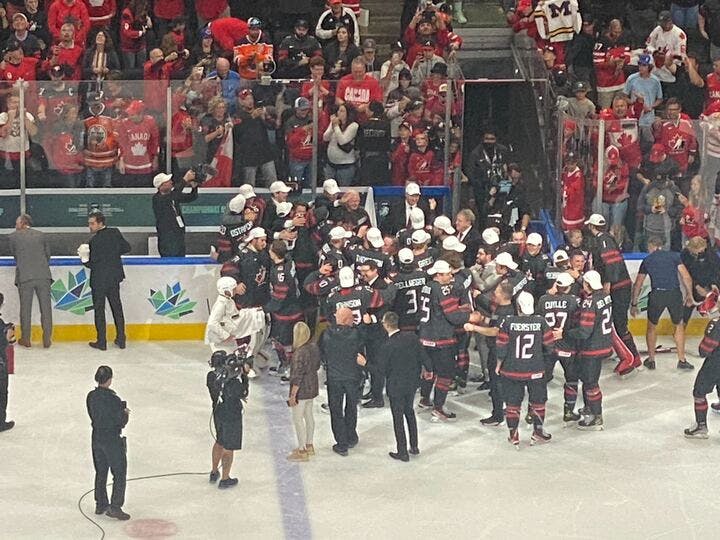 By Jon Steitzer
5 months ago
For many Leafs fans the gold medal game worked out pretty well. Team Canada picked up a gold medal and the two Finnish Leafs prospects had a good showing on their way to earning silver medals.
Team Canada, as they were throughout the tournament, were just too overpowering for their competition. As deep as the Finnish team is, the high end talent on Canada made the difference and strong games from players like Mason McTavish and Olen Zellweger seemed like it couldn’t be matched and the fact it took until overtime for Kent Johnson to beat Finland is not the way this game seemed to be going through the first two periods.

The start of the first was certainly saw the Canadians establish themselves and make it their game to lose. Finland was treading water for the first 12 minutes and held without a shot. The Canadians were also got on the board first which certainly made things infinitely tougher for Finland in a hostile building.
To the credit of Niemela and Hirvonen, they showed themselves well in a tough situation. Neither were part of the offensive flogging from Canada early in the period and Niemela had one of the better early chances for Finland with a powerful one timer from the point. He’d pick up another shot on goal later in the period too.
Hirvonen wasn’t without a strong chance as well. Setting up in front of the net, Roni had a good chance from the high danger area and immediately drew a crowd on the resulting whistle.
Hirvonen’s ice time was notably low playing just 4:34 in the first while Niemela led the Finns in icetime with 7:27.

William Dufour’s early goal in the second felt like the end of Finland. After a strong showing the end the first, Canada was able to end any attempt at Finnish momentum to start the frame. The fact that Finland followed that up with taking five consecutive penalties didn’t help their cause and the fact that the period ended with a 2-0 lead for Canada was nothing short of a miracle.
Niemela played a significant part in killing off the endless series of penalties, and at those rare moments when both sides were 5 on 5, Niemela tee’d up a nice heavily screened shot on goal, but it went wide.
Hirvonen also had a couple of opportunities that went wide, both on break-ins. One would end up going the other way for Canada, but that was more to fault of Ruben Rafkin getting caught out of position.

Finland came out aggressively to start the third, including a howitzer from Niemela and solid rebound attempt from Hirvonen, but Canada stood strong there. Finland did finally got on the board early in the third and made a game of it after penalty riddled 2nd.
It’s at this point when Niemela became a difference maker. The puck found its way onto his stick and with a clear shot at the net, Niemela opted for pass to Joakim Kemell with a wide open net to shoot at to tie the game with 9:14 remaining.
That goal was enough to send the game to overtime.

Overtime and putting a fork in the World Juniors

It says something about how well regarded Niemela and Hirvonen are that they both started 3 on 3 overtime along with Aatu Raty.
On his second shift Niemela came about as close as you can get to scoring the game winner without it going in.
That unfortunately led to an unfortunate moment for Roni Hirvonen as he was on the ice and attempted to break up the play that would be Kent Johnson’s game winning goal.
It was without a doubt an exciting end to a tournament that lacked a lot of memorable moments.
The two Leafs prospects head home with heads held high. It was an incredible showing.
More from The Leafs Nation