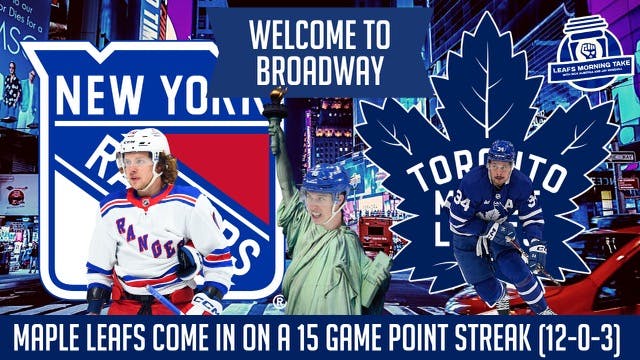 By Nick Alberga
1 month ago
Lo and behold, we’ve reached another measuring stick game for the Maple Leafs.
Fresh off a 7-0 dismantling of the Anaheim Ducks, Toronto is on Broadway tonight to tangle with the red-hot New York Rangers. The two squads, who are squaring off for the first time this season, have both won four in a row. (By the way, the Leafs went 1-1-1 against the Rangers last season).
And so the Thursday edition of Leafs Morning Take got you set for that one. Additionally, the point streaks will be on the line once again, too. Mitch Marner has gone 23 in a row with at least a point while the Leafs have a chance to tie their team point streak record of 16 games. Can’t wait to see what happens!
Meantime, in addition to teeing up the projected goalie matchup tonight, we also took a glance at the up-to-date Atlantic Division standings. It’s never too early to start talking about the playoffs, right?
Lastly, to wrap, we’re expecting big things from Auston Matthews tonight at MSG. With that in mind, here’s the PointsBet Canada bet of the day:
Join us on Friday at 11 AM ET as we tie a bow on another week and offer up a full recap of tonight’s big-time clash in NYC.
Don’t forget to subscribe, like, and leave us a review wherever you’re checking us out!
Shows
Recent articles from Nick Alberga