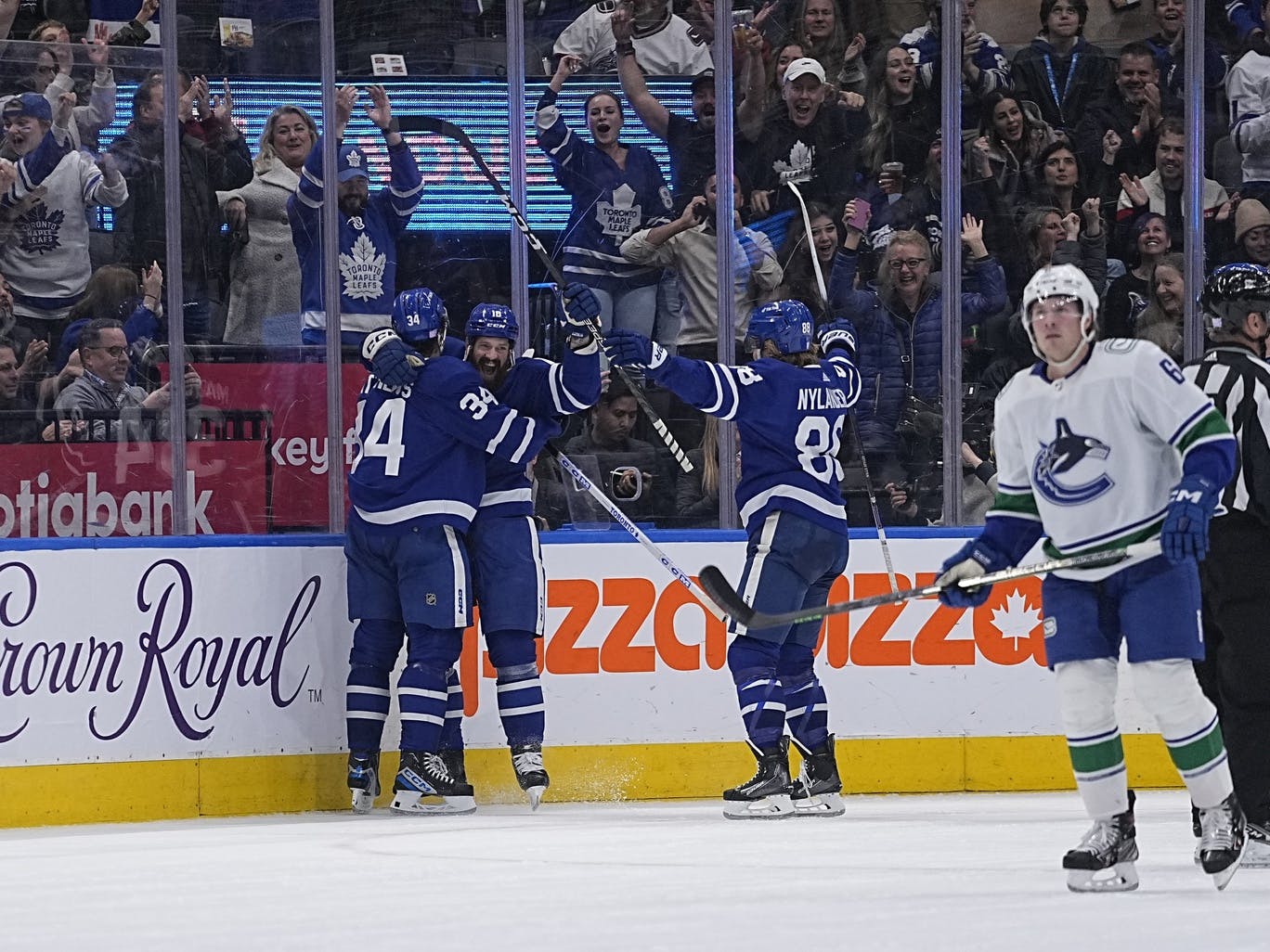 By Nick Alberga
2 months ago
As expected, it was another emotional night at Scotiabank Arena as the Leafs honoured the legendary Börje Salming. The 71-year-old is battling ALS. No words can properly describe the scene.
On the ice, the Leafs delivered as well —with exception to whatever the hell that was in the first period, of course.
Jordie Benn, who was making his Leafs debut for the banged up T.J. Brodie, notched the game winner to lead Toronto (8-5-3) to a 3-2 victory over the Vancouver Canucks (4-8-3).
As referenced, if you can believe it, the Leafs spotted the visitors a 2-0 lead after one before storming back to score three consecutive goals in the second period. In addition to Benn, Auston Matthews and Pierre Engvall also hit the scoresheet. By the way, Matthews continued his dominance of the Canucks, he now has 16 goals in his past 16 outings against them. Erik Kallgren made 28 stops to improve to 2-2-3 on the season.
Muzzy’s Muzings:
BORJE SALMING
Sadly, I’m too young to have seen Salming play, but you can bet I’m well aware of his importance and significance to the franchise and city. Despite the tough circumstances, I thought the Leafs game ops crew did a tremendous job honouring him. For the second straight night, there wasn’t a set of dry eyes in the building. I know mine weren’t watching along on TV, that’s for sure. Additionally, I thought it was a fantastic touch by Sheldon Keefe to start all six of Toronto’s Swedish players.
FIRST PERIOD STRUGGLES
My TLN colleague Nick Richard couldn’t have put it any better after the first period.
At risk of being too harsh, how in the world do you come out that flat after honouring a franchise great? It was perplexing, but unfortunately, we’ve seen a few of those lopsided periods so far in the early season. Also, the whole back-to-back games excuse is so tired. These are professional athletes, they’re in ridiculous shape. Rant complete.
SOLID RESPONCE IN SECOND
Piggybacking off what I just said, the good news is that Toronto looked like a completely different team for the rest of the game. For the most part, although they got in a bit of penalty trouble once again, they played with pace, urgency, desperation and purpose and really took it to the fragile Canucks. Of course, the search for consistency continues, but it was great to see the response they direly needed after that dismal first frame.
LINE JUGGLING
Once again, Sheldon Keefe did not shy away from jumbling up his lines and similar to last Sunday’s win in Carolina, it actually worked. As the game went on, I felt they got stronger and stronger. Honestly, it was hard to believe Vancouver was the fresh team having not played since Wednesday. For what it’s worth, I don’t mind the Matthews/Nylander and Tavares/Marner pairings. It’s early enough in the season where you can experiment, I’ve got no problems with it. I love when they go nuclear too, it’s sweet seeing the big boys play together at even strength.
Highlight of the Night:
WHAT’S NEXT?
The Leafs will be back in action on Tuesday night in Pittsburgh. It will be very interesting to see if Matt Murray returns from injury. Of course, he won two Stanley Cups with the Penguins. The Leafs fell 4-2 to Pittsburgh Friday night.
PSA: Don’t forget to check out ‘Leafs Morning Take’ with yours truly, Nick Alberga, and Jay Rosehill every Monday to Friday morning LIVE at 11 a.m. ET on The Nation Network YouTube page.
Editorials
News
Recent articles from Nick Alberga