Let’s get physical: Welcome to Sheldon Keefe’s era of truculence 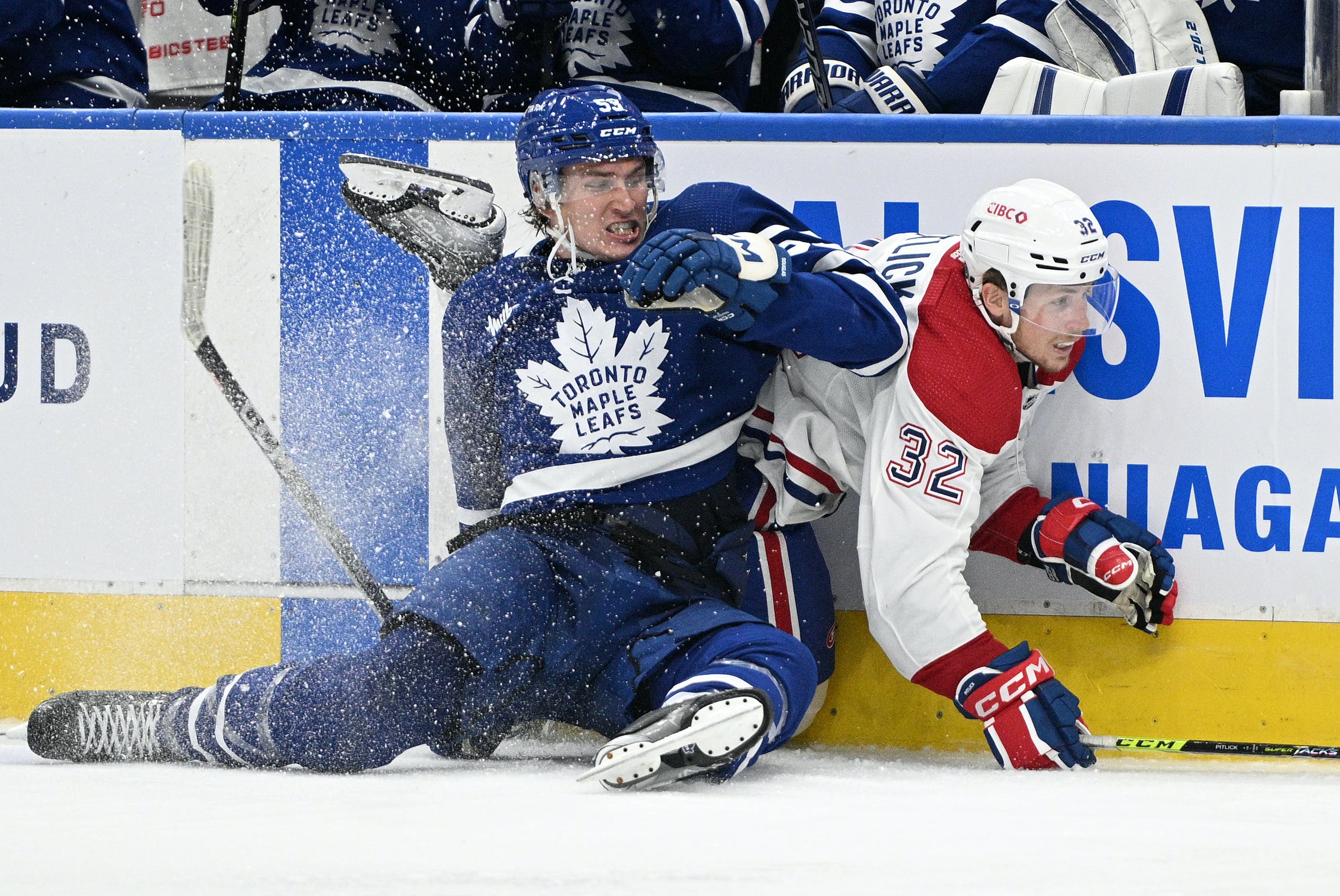 By Jon Steitzer
2 months ago
It’s a familiar refrain both amongst fans and media in Toronto, the Maple Leafs are too easy to push around. This often gets dismissed because while they are getting pushed around they are producing some of the most successful regular seasons in franchise history and the idea of playing to your strengths is somewhat sound. There’s also not a whole lot of correlation between hitting or blocking shots with winning games, and substantial correlation puck possession numbers would require your team to be in control of the puck, not hitting the puck carrier and definitely not blocking shots to get it back. Still, even dominant puck possession teams are going to be playing without the puck 40% of the time and perhaps there is value in controlling where the other team is going with the puck or aggressively trying to get it back. That’s where the plea for physical play comes in and that’s what the Leafs heard this week from Sheldon Keefe:
This has to be comforting for a large number of Leafs fans, as do a number of the additions that the Leafs have made to their lineup over the summer. The Toronto Maple Leafs seem to be committing towards taking steps in the direction of team toughness over the previous bandages of having one or two guys on the roster who are okay with hitting.
Now, while the stats that I’m looking at are largely hits and blocked shots, some of the toughness aspects aren’t measured. Last year we saw Auston Matthews a lot more comfortable powering through the offensive zones with defensemen on him, and a recent players survey in The Athletic had players praising Matthews’ ability to seemingly win every puck battle.
There are other examples as well, like Michael Bunting’s ability to draw penalties and be a glutton for punishment around the opposition net, and the Leafs penalty kill is a prime example of the Leafs offering up less space and time for their opponents to set themselves up. There is still room for improvement, but the Leafs have taken a step forward in aggressive play last year in comparison to the preceding seasons.
None of the hits or blocked shot numbers are particularly inspiring, but you can also see where they have had little impact on the Leafs goals and shots against. They may impact the quality of those chances from time to time, but in a general sense the impact isn’t significant over the course of the season. Half the of the top hitting teams in the league missed the playoffs. Others like Tampa Bay did quite well, but it’s important to note that while the Leafs were ranked 24th in the league in hits, the Colorado Avalanche were ranked 23rd. I doubt that one spot makes a significant difference, and even in the playoffs the Avs Hits/60 was only slightly higher than the Leafs.

Still, despite not being a necessity, physicality is the road less traveled for the Leafs, and seems to be the direction that not only Sheldon Keefe is pushing in training camp, but the one that Kyle Dubas steered into for offseason acquisitions.
(*yes, Aston-Reese hasn’t been signed yet, but we all see it coming, right?)
Well…maybe Mete wasn’t so much a truculent hire, but even despite Jarnkrok’s lower hit numbers, he has a reputation for being a sour pain in the ass to play against in the defensive zone and that certainly adds some value too.
The main thing is also trying to get more out of the Leafs current roster when it comes to physical play and there was significant growth in that regard last season already. It’s safe to say that Keefe and the Leafs staff would like to see that continue:

The Leafs who returned from 2020-21 to play for the team in 2021-22 were generally more aggressive, save for Engvall and Liljegren as the significant drop-offs. The increased aggressiveness in Mitch Marner’s game was extremely noticeable, but you could almost say that Holl was more aggressive to a fault. When you look at how the Leafs added Michael Bunting and David Kampf to make the Leafs more difficult to play against last season as well, the organization isn’t so much going in a new direction this season as they are adding to a direction they established last season and with William Nylander using his size more in the early days of training camp and in the World Hockey Championship last spring, there is some hope that he too can make the Leafs a more difficult team to face.
While a physical style of play isn’t a guarantee of regular season or playoff success, it is a bit of a necessity in the Atlantic Division. The Senators, Lightning, Bruins, Panthers, and Canadiens were all in the top ten in the league last year in Hits/60, and those are the teams the Leafs will be facing the most, and in the case of the Senators, Lightning, Bruins, and Panthers, the teams that the Leafs would likely need to get through in the first couple of playoff rounds.
It seems Toronto hasn’t sacrificed much in the way of their puck control game that has gotten them this far but has been changing their style away from the puck a bit more to recognize the realities of their division. They have 82 games to perfect what they are doing before facing their real test.
Stats via NHL.com
More from TheLeafsNation.com:
News
Recent articles from Jon Steitzer