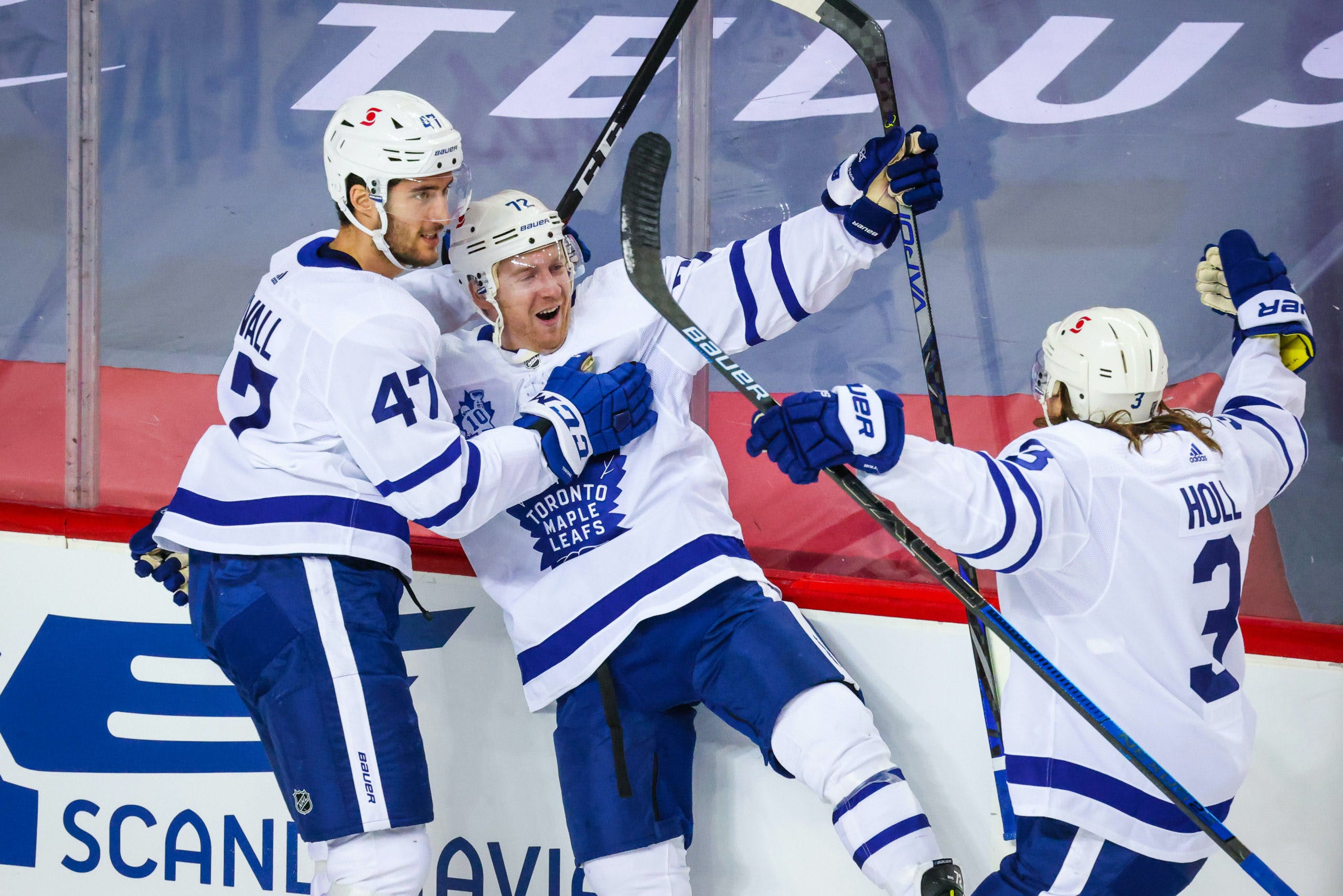 By Roxanne Khasow
1 year ago
From a near perfectly played first period, to a couple of unanswered goals, the Toronto Maple Leafs come back to hand the Calgary Flames their second regulation loss of the season with a 4-3 win. @Wayne Simmonds wasn’t holding back and opened up the scoring less than four minutes in the first period as he capitalized on @Justin Holl’s rebound with a shot that made it past @Jacob Markstrom.
The Leafs were dominating the game and held the Flames over 11 minutes without a registered shot on goal. The Calgary Flames had a chance to tie it up on a power play as @Pierre Engvall was called for tripping, but they were unable to convert. The Leafs then had their chance to double their lead on a power play as @Elias Lindholm was called for hooking, and they did just that. @Auston Matthews delivered and made it a 2-0 game with a beautiful pass from @Mitch Marner.
The Flames were coming hot in the second period as @Johnny Gaudreau cut the Leafs’ lead in half with a shot that found its way to the back of the net past @Frederik Anderson. But the Leafs answered right back just over a minute later, restoring their two goal lead. As they transitioned through in the neutral zone, with a pass by @Pierre Engvall to @Travis Boyd, as Boyd scored his first goal as a Toronto Maple Leaf.
The Leafs seemingly flipped positions with the Flames as they were now held without a registered shot for 10 minutes. The momentum was changing and @Milan Lucic went five-hole on @Frederik Anderson making it a 3-2 game with a few minutes left in the second. As both teams came back for the third period, you could sense the urgency on both teams, with chances on both ends of the ice. The Flames go on a power play as @John Tavares is called for holding, where @Johnny Gaudreau tied it up, and gets his second goal of the game. The Leafs finally settled down the puck with a few good plays as @Mitch Marner restores the lead with a solid one-timer. The Leafs manage to hold onto their lead for the remainder of the game to claim their sixth win of the season with 12 points, putting them at the top of the standings.
Most Valuable Leaf: Mitch Marner
@Mitch Marner has simply been on fire lately. With back-to-back two point games, including tonight’s game winning goal, Marner is currently the NHL’s leader in points. He’s making both smart and confident plays, and getting pucks to the back of the net. I guess you could say that contract was worth it after all.
Least Valuable Leaf: Ilya Mikheyev
Hear me out, I know he’s trying, but he just hasn’t been able to convert. Mikheyev has had a lot of unlucky bounces lately and in all honesty he’s overdue for a goal. His missed near-empty net shot led to the next play by the Flames where Lucic was able to make it a one goal game which changed the momentum of both teams.
Tweet of the Night:
Matthews. Papi. Caliente.
What’s Next?
The Leafs continue their Alberta trip as they take on the Edmonton Oilers at Rogers Place on Thursday night at 10pm. Look forward to the ol’ Matthews-McDavid matchup and a late night of hockey.
Uncategorized
Recent articles from Roxanne Khasow