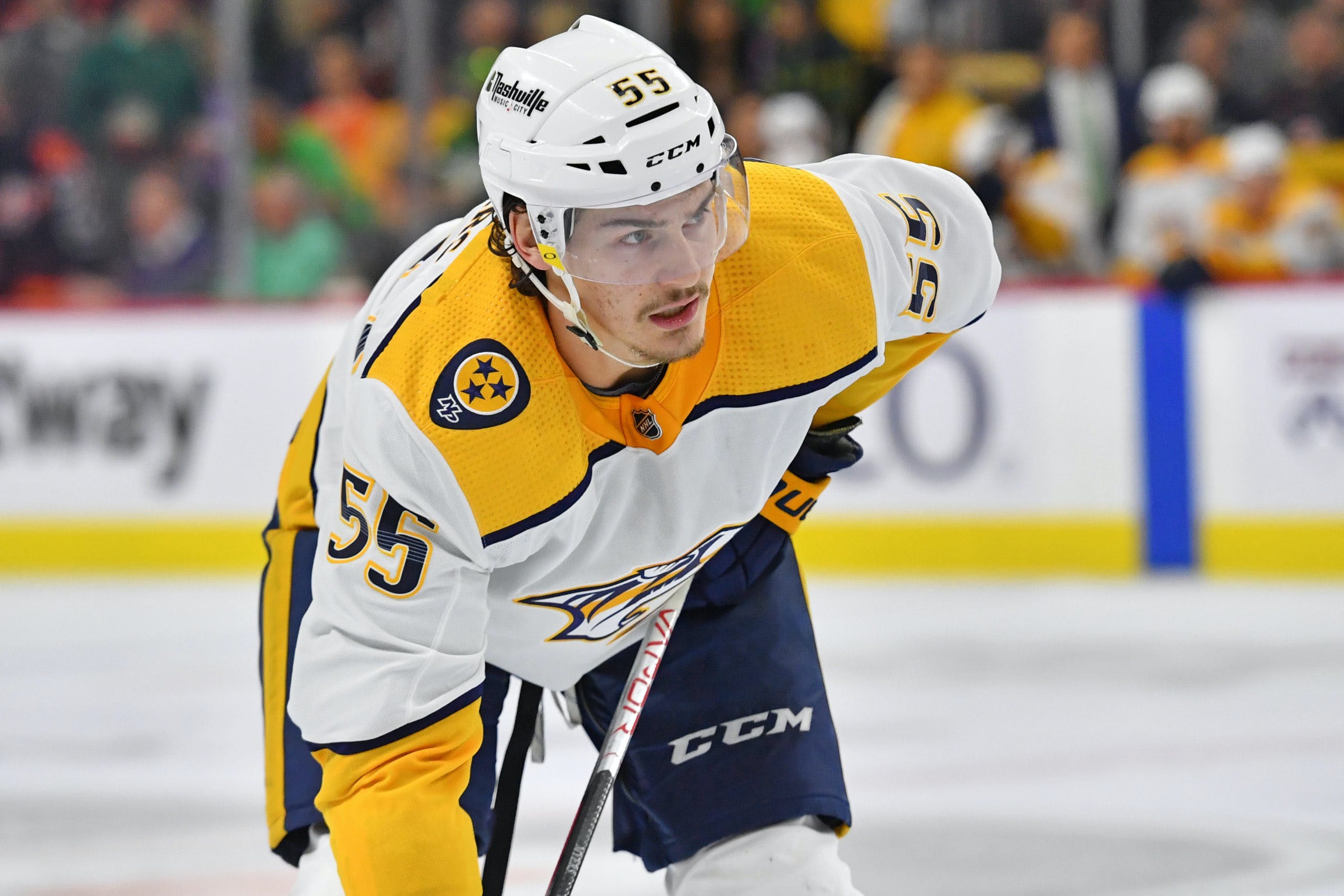 By Nick Barden
7 months ago
You can do it for the money or you can do it for the value. Choose your option.
The Maple Leafs have two options in the coming weeks — trade for or sign Philippe Myers when he eventually gets bought out from another team.
When Toronto acquired the 25-year-old in an AHL loan from Nashville, a small door opened up the possibility that he could play here in the future.
Joining the Marlies three-quarters of the way through the season, Myers was excited to play meaningful hockey rather than bouncing in and out of a lineup at the NHL level.
But now, he and his contract are at a crossroads. A couple of days ago, DailyFaceoff’s Frank Seravalli came out with a list of 25 potential trade targets in the near future. Myers was one of them listed at #10.

From Seravalli’s article:
“Scoop: Why Myers, a player who has already passed through waivers? Myers represents a unique and quirky opportunity for a cap-strapped team that can trade for him and actually create salary cap space with a buyout. Because Myers is 25 and his deal is backloaded, his buyout would result in a $616,666 credit on next season’s cap, followed by a $633,334 charge the following season.”

Either the Maple Leafs can trade for the 25-year-old and then buy him out, or they could wait and pounce on him if he gets bought out by another team.
It works either way for Toronto. The salary cap credit is great and the cap charge doesn’t move the needle enough where you’re worried about making the move. If the Maple Leafs were looking at creating a bit more space, this would be the way to do so.
But what Toronto is lacking heading into next season is defensive depth. They’ve likely got Timothy Liljegren and Rasmus Sandin back, unless either of them gets offer sheeted and the Maple Leafs don’t match it. TJ Brodie will be a mainstay on their right side, but the future is always complicated for Justin Holl.
It seemed like he could’ve been traded last summer, but it never worked out. And now, again this off-season, the 30-year-old is appearing on trade lists again.

The interesting part to all of this is could the Maple Leafs move Holl and possibly go for Myers this summer? It’s a question that’s very valid and worth finding the answer for.
This is the last year of Holl’s three-year deal that has a $2 million AAV attached to it. While it’s not a lot of money to pay for a player of his calibre, Toronto might want to find a third-pairing defenceman that’s a little cheaper.
Holl has a modified no-trade clause in his contract meaning he has ten teams listed not to be traded to. The Maple Leafs could save some money by moving Holl and signing someone like Myers to a lower cap hit.
But is Myers better than Holl?
One of the aspects that Myers shows to be better at is being physical. Although both players are around the same height and weight, it seemed like whenever Myers threw his body around it was like a freight train hitting you. We don’t see that often from Holl.
This is not the player that we’d likely see in the NHL, though. Myers has averaged 1.7 hits per game throughout his NHL career while Holl has 1.51 hits per game. To me, that’s not a big enough difference where you’d trade Holl just to sign Myers. Plus, the AHL is much different than the NHL in terms of speed and physicality.
Part of the reason why Myers was sent down in Nashville was because he didn’t play good enough for the NHL roster. And while the Predators have a decent looking defence core, I’m not sure it’s better than Toronto’s at the moment.
The only aspect that Myers might bring better than Holl is his age. He’s 25-years-old while Holl is 30 — a pretty big gap which might show that there’s more room for Myers to improve and develop.
But in all honesty, the right fit for Myers in Toronto would be a 7th defenceman role, unless he made it clear with his play that he’s more than that. This shouldn’t be a move where you send Holl packing just to acquire this player.
The best route for the Maple Leafs would be to trade for him now and buy out the remaining year. It’ll save them some cap space and allow them to sign the players they have right now. Plus, there’s a lot of other defencemen out there — Myers shouldn’t be put up on a pedestal just because he played with the Marlies.
He’s an incredibly talented player, but unless the 25-year-old wants a smaller role with the team, he’s not someone the Maple Leafs should pursue right now.
(Statistics via Hockey-Reference.com & contract values from PuckPedia.com)
More from TheLeafsNation.com