Marlies who could make the Leafs opening night roster 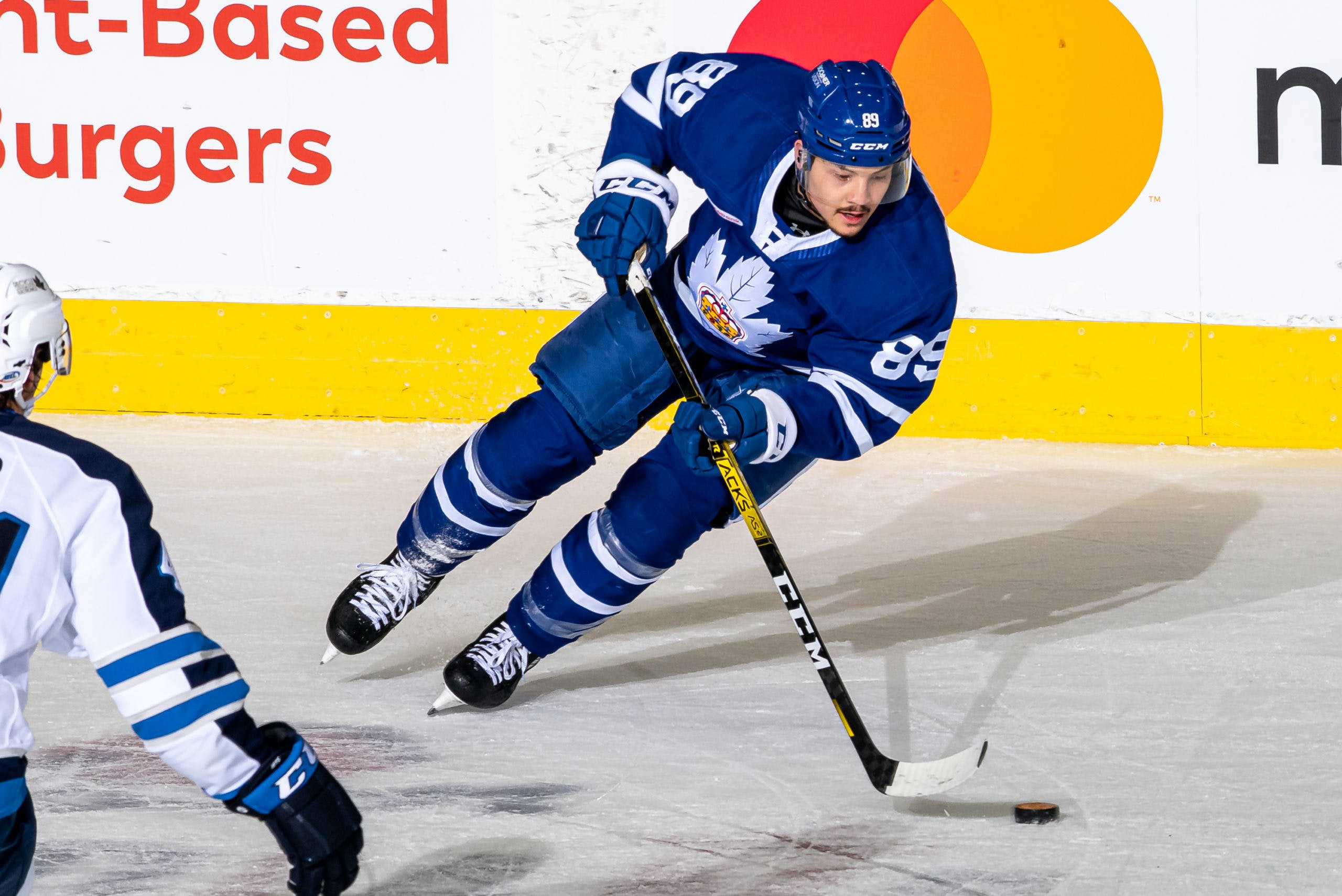 By Nick Barden
1 year ago
The Toronto Maple Leafs have a packed roster. Period.
After signing players like @Ondrej Kase, @Nick Ritchie and @Michael Bunting, the chances of players from the Marlies coming up and starting the season with the Leafs is very small. However, there’s always a small window that comes in training camp where players could steal a spot on the roster.
As it stands right now, I’d say that Bunting and Ritchie are playing in the top-six, with one being on @Auston Matthews’ wing and the other on @John Tavares’. And while things can change, I’d like to believe that @Mitch Marner and @William Nylander are still on their same wings as last season.
There is always a possibility that Sheldon Keefe comes in and shakes things up. But for now, I think the Leafs lineup will look like this:
Bunting-Matthews-Marner
Ritchie-Tavares-Nylander
Mikheyev-Kerfoot-Kase
Kampf-Spezza-Simmonds
Rielly-Brodie
Muzzin-Holl
Sandin-Dermott

Marlies who could make the jump

Last season, the Leafs had plenty of players in their development system who were more than worthy of NHL gigs. It’s just so difficult because Kyle Dubas likes to continuously add depth in case of injury. I do want to clarify that it’s not an issue to add depth. However, if you have resources within your organization already, you should look into that first.
And maybe he has, but from what it looks like, some players haven’t had a legitimate chance to try and stick.
Missing from that lineup above, though, are @Pierre Engvall, @Kurtis Gabriel, and @Brennan Mennell who are all players who could very well steal a roster spot if they have a good camp.
There are also some others, who are from the Marlies:

At 25-years-old, Brooks seems ready to make the jump to the NHL. He appeared in 11 games last season with the Maple Leafs and played considerably well in all of them. There may have been one or two where he wasn’t as effective, but Brooks has shown he can be a reliable player in the NHL.
Both his offensive and defensive game have come a long way. Along with that, Brooks has the ability to be a solid play driver with line mates such as @Jason Spezza, and maybe even @Wayne Simmonds.
For Brooks, the hardest part will be cracking the Maple Leafs’ lineup. The depth is a massive road block for him, but it’s always possible that he impresses in training camp and earns a spot.

Coming across in the trade with New Jersey, I believed Anderson was destined for the NHL right away. He impressed me in his first game with the Leafs, and I’ll say that I was quite surprised he was sent down to the Marlies at the time.
While he was down in the AHL, you could see a few issues that he could face being a full-time NHLer. Anderson’s skating wasn’t a massive issue, but it was an aspect of his game that could be tweaked. Since the midway part of the Marlies season, the 23-year-old worked with Barb Underhill and Toronto’s development staff and has since fixed his skating.
Anderson has always been a difficult player to play against, as well as having a knack for producing. In the AHL, he spent time playing in every situation possible, and I think it may be time for him to get a taste of the NHL too.

After playing in the bubble back in 2020, the 19-year-old finally got his first taste of full-time pro hockey. Spending most of the year with the Marlies, Robertson had five goals and 11 assists in 21 games. From what I saw, he struggled with the strength of the AHL — always getting beaten off pucks.
I believe the speed of the game factored into that as well. Robertson did so well at the NHL level because the lack of time he had to think while holding the puck. With the AHL being a bit slower, players like him will have more time to think which will actually hinder their ability to make plays. The less time he has with the puck, the better.
His season was also filled with injuries, and one that actually ended his season with the Marlies. The 19-year-old was almost ready to return while the Leafs were playing Montreal in the playoffs, but then Toronto was eliminated.
Robertson has proven that the NHL could be the better option for him. However, Leafs management may want to get another look at him in the AHL level before making any quick decisions on his future.

It feels like it’s been a life-and-a-half since Liljegren was drafted into the organization. After another year where it looked like the 22-year-old took considerable steps to becoming a legitimate NHL defenceman, he still seems to be on the outside looking in.
Last year it was his offensive game that needed work, and he finished this past season with 11 points in 21 games. I believe that everything is there for Liljegren, he just needs a full-time spot on the Leafs to show it. And if he never gets that chance, we won’t know how what he can be.
When he was asked last season whether or not he though he should be in the NHL, Liljegren struggled to answer it. He was visibly frustrated when the question was asked, and if he’s not in the Leafs lineup this year, where does he go? There’s always a chance that the Leafs trade him, but other teams likely won’t value him as Toronto does, and there wouldn’t be a massive return.

I honestly don’t believe any of these players will make the Leafs out of training camp. If I had to bet on one, it would be Brooks just because he’s been with the Leafs the longest at the NHL level. You could also add Robertson to that list, too, just in terms of his massive shot and his ability to be a feisty player.
With Simmonds re-signing for two years, Spezza re-signing for one, and Toronto adding a boatload of other players, it seems like each of the guys I listed above will be low on the list of potential Leafs in the lineup for opening night.
There’s also the possibility that I could be wrong (I’m hoping I am). They are professional hockey players for a reason and any of them could shock you with what they can do in an off-season. It’ll be exciting to see what happens, but I personally won’t get my hopes up for any of these players to be on the Leafs opening night roster.
Uncategorized
Recent articles from Nick Barden