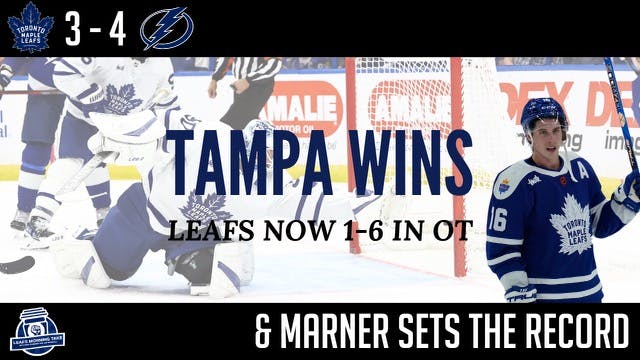 By Nick Alberga
1 month ago
By and large, it was another successful weekend for the Maple Leafs.
Yes, they didn’t come away with the victory in Tampa, but you’re not going to win them all, right?
That said, Mitch Marner broke the franchise point streak record, and on top of that, Toronto extended its team point streak to an impressive 11 games (8-0-3). In fact, the Leafs haven’t lost in regulation since way back when on November 11th.
Furthermore, once again, Mitch Marner was a big topic of conversation on the Monday edition of Leafs Morning Take. When he’s playing this way, there’s no doubt he’s one of the league’s premier talents. You love to see it.
Additionally, we discussed the call-up of Semyon Der-Arguchintsev. It’s underplayed, but for the first time in seemingly a while, the Leafs have had considerable contributions from their prospects/AHL call-ups. It’s been fantastic to see and certainly something this team needs when you’re paying the big boys what you are.
Lastly, we previewed the battle of the point streaks on Tuesday night in Dallas as Mitch Marner (19 games) squares off against Jason Robertson (18 games). Let’s go!
Meantime, for the PointsBet Canada bet of the day, I’m looking at a cheeky revenge narrative in Boston.
No Rosie tomorrow, which means another instalment of 3 Hits With Rosie. Also, I’ll preview Leafs/Stars, plus Red Wings forward Matt Luff will drop by.
Don’t forget to subscribe, like, and leave us a review wherever you’re checking us out!
Shows
Recent articles from Nick Alberga