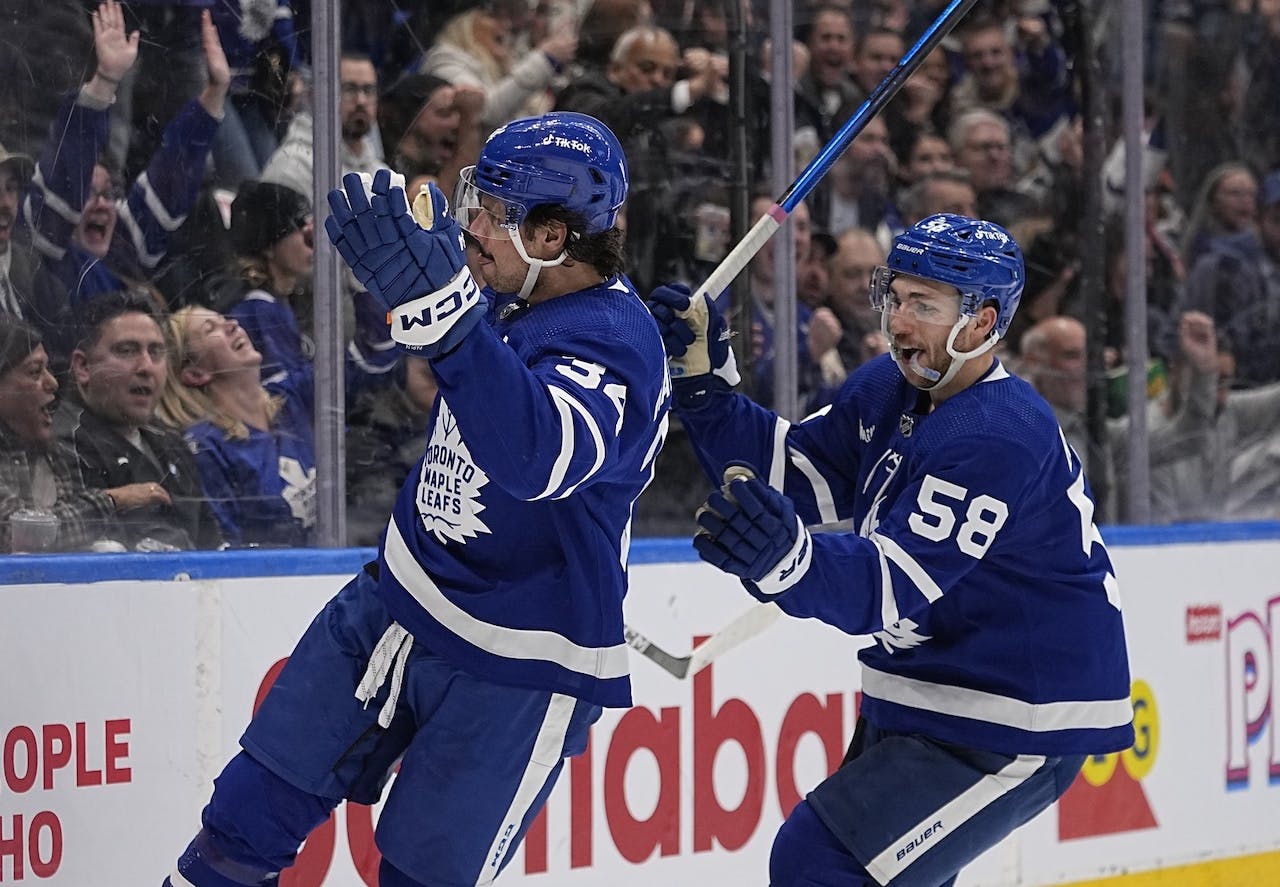 By Nick Alberga
1 month ago
13-1-4 since November 1st, the Toronto Maple Leafs will put their 13-game point streak (10-0-3) on the line tonight when they host the Calgary Flames.
If you can believe it, Toronto hasn’t surrendered a goal since Alex Killorn’s OT winner a week ago in Tampa. On Tuesday night, the Leafs pumped the Stars 4-0 in Dallas before utterly dissecting Los Angeles at home 5-0 on Thursday night; Matt Murray and Ilya Samsonov notched a shutout a piece.
In addition to the team point streak, in case you live under a rock, Mitch Marner has his own personal point streak going, too. The 25-year-old potted his 11th of the campaign against the Kings to extend his point streak to a whopping 21 games. Furthermore, he has 10 goals and 28 points during that time frame.
On Friday, the Leafs announced that Nick Robertson will be out indefinitely due to a shoulder injury. Also, Pierre Engvall won’t play tonight, he was suspended one game for high sticking Kings blueliner and former Leaf Sean Durzi.
In two meetings with the Flames in 2021-22, Toronto picked up just one of a possible four points (0-1-1).
Time: 7 PM ET (CBC, Sportsnet)
Starting Goalies:
CGY Dan Vladar – LIKELY (5-4-1, 2.59, 0.912)
@
TOR Matt Murray – CONFIRMED (6-1-2, 2.34, 0.932)
Projected Lineups:

Three Storylines:
THE POINT STREAKS
The beat goes on for Mitch Marner and the Toronto Maple Leafs. The 25-year-old is up to 21 straight games with at least a point and Toronto has gone 13 in a row without a regulation loss (10-0-3). Simply put, they go hand and hand like dipping sauce and pizza. Now that he passed the club record, it’s gravy from here for Marner. All things being equal, I think he’s playing the best hockey of his career right now, it’s been a joy to watch. Keep the good times rolling!
DEPTH TEST
Toronto’s depth has been an unheralded story lately, but without question, it will be tested tonight and moving forward. Already missing Calle Jarnkrok, Nick Robertson will be out indefinitely with a shoulder injury. Furthermore, Pierre Engvall will miss tonight’s game due to a well earned one game suspension for high sticking Kings blueliner Sean Durzi on Thursday night. Joey Anderson was recalled from the AHL and is expected to make his season debut. Additionally, Wayne Simmonds is expected to draw back in, too, which makes sense against Calgary, they’re a physical team.
JUMP ON THEM EARLY
The first 10 minutes of this game will mean everything. Whether they’ll admit it or not, Calgary is coming off a spirited and emotional game in Columbus against former teammate Johnny Gaudreau and the Blue Jackets. On top of that, they lost, so you know there will be that early push tonight to make up for last night. That said, full credit to them, the Leafs have really improved upon how they start games, especially after whatever that was in October. Do more of that tonight, please.
BETTING:
Courtesy our friends at PointsBet Canada, here’s tonight’s lines & odds:
(As of Noon EDT)
Prop Play:
John Tavares Anytime Assist (+140)
Editorials
News
Recent articles from Nick Alberga